Las Mercedes, Plantation Country, And My First Off

We awoke to a beautiful morning with the sun shining brightly. After the ride through the jungle the night before the four of us – Yun, David, Roger and I – just wanted to just bask in the beauty of the weather for a while. We took our time packing the bikes and enjoying another delicious breakfast. 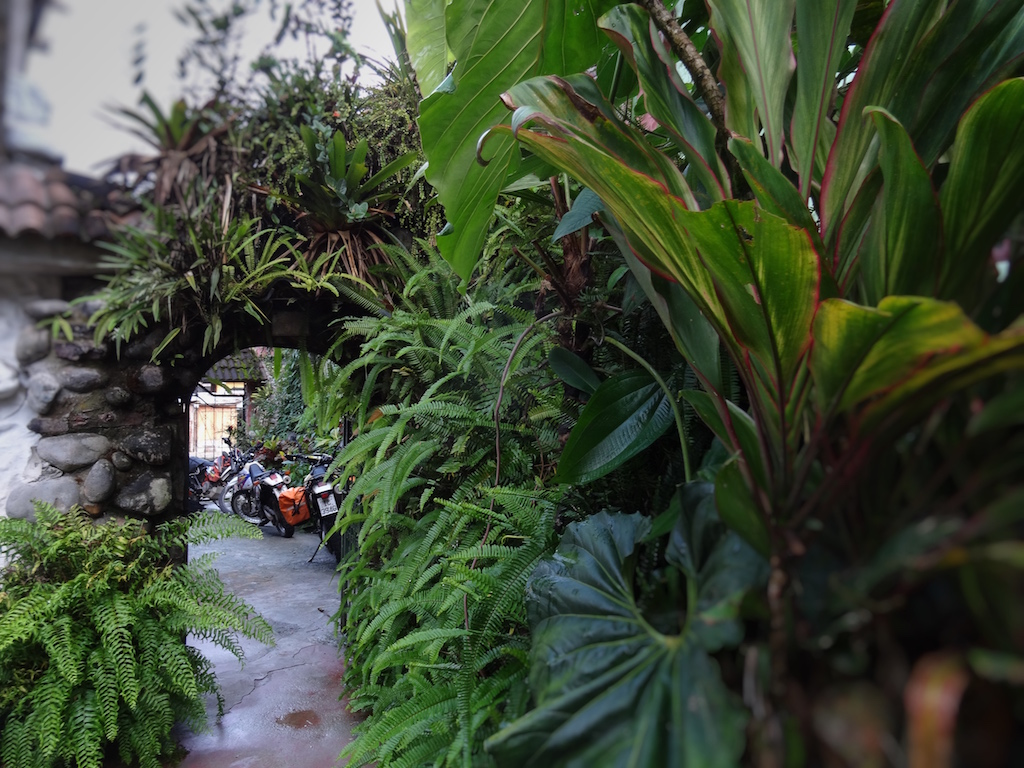 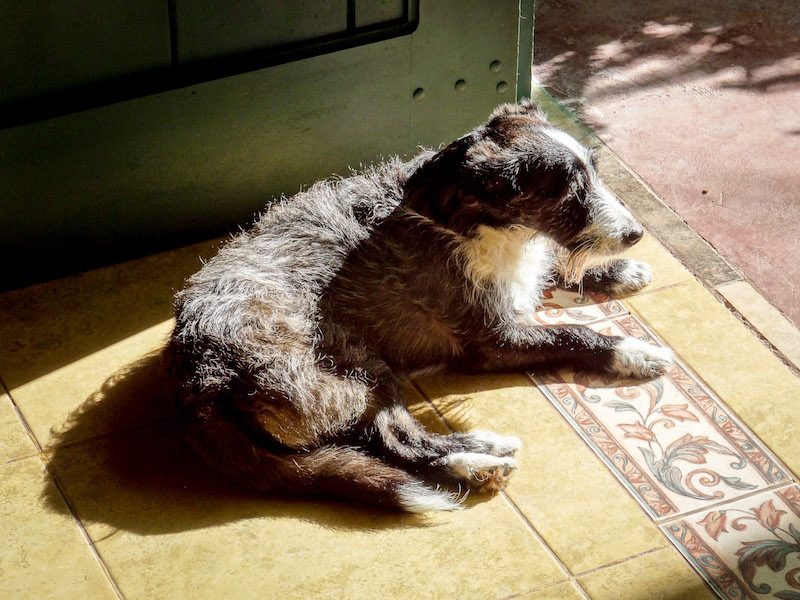 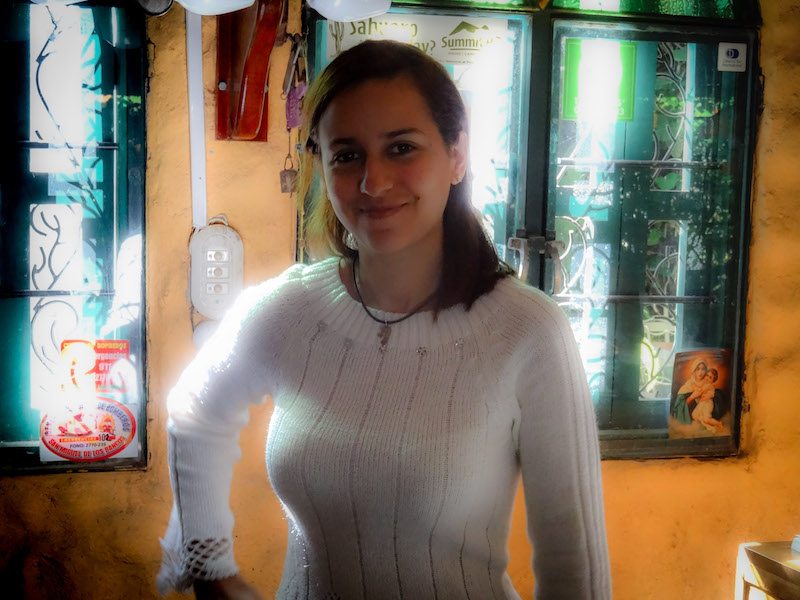 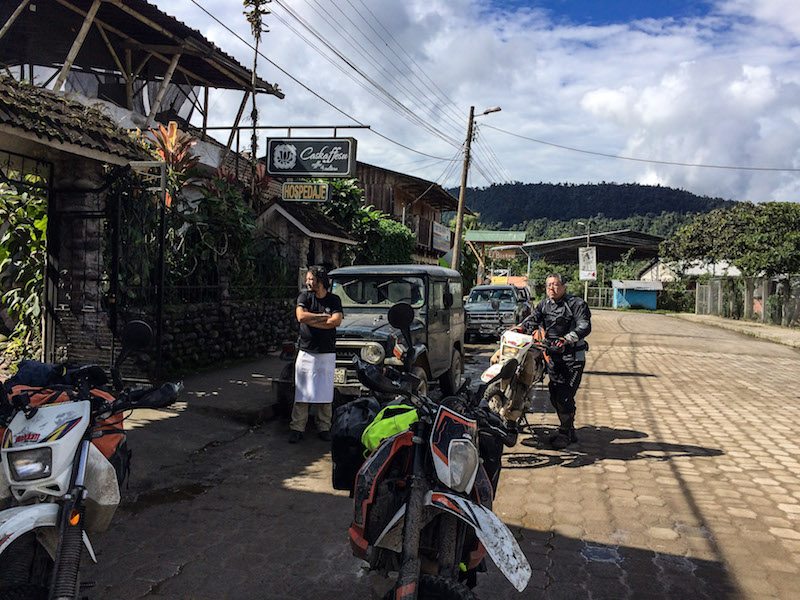 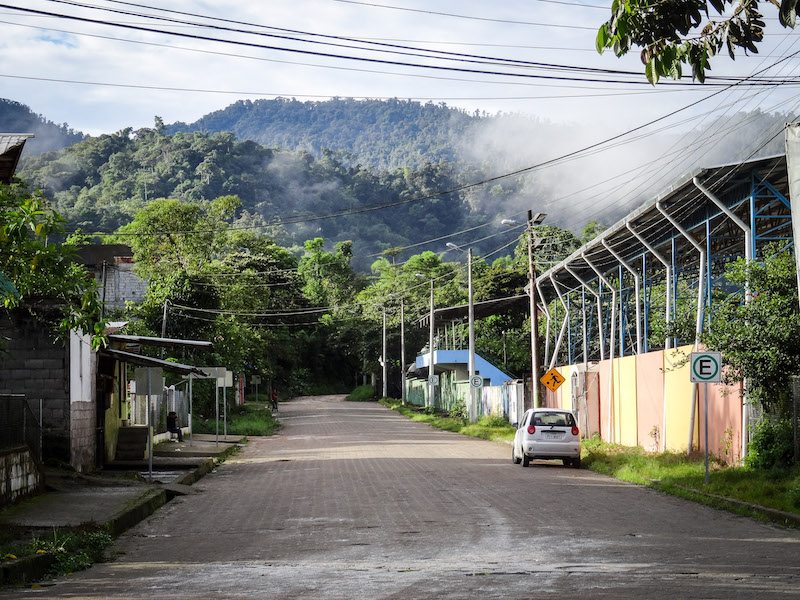 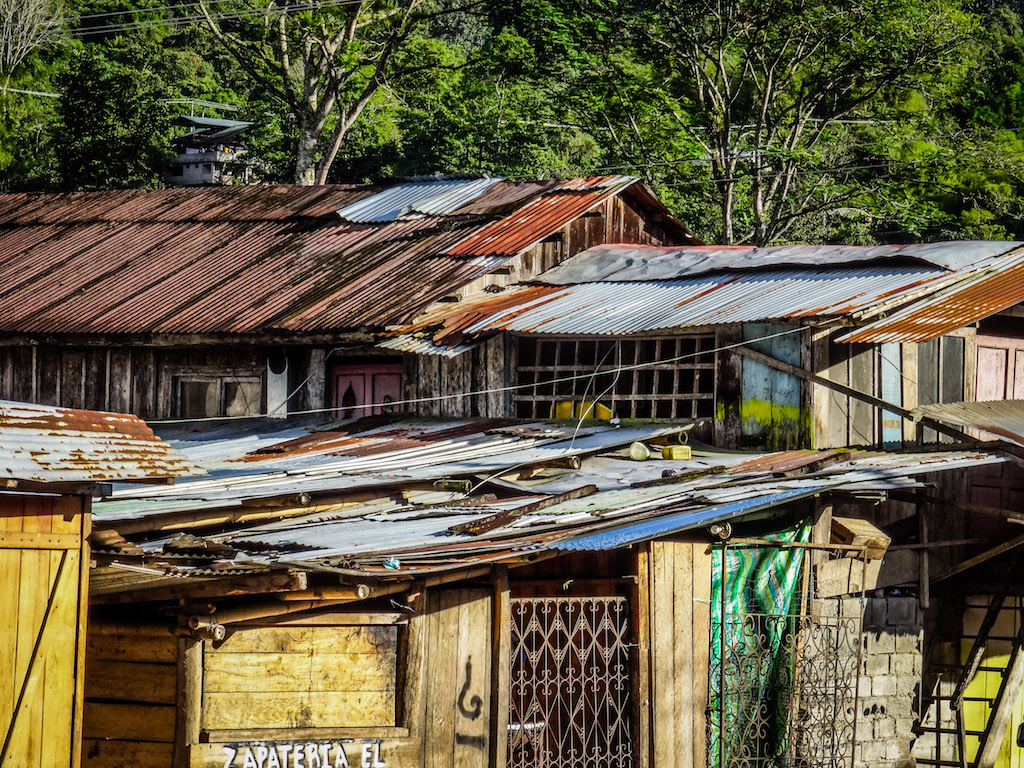 Too much time, apparently . . . Court called the hotel at 09:00, and in his gravelly Boston accent asked:

Why aren’t you on the road?

News of our late arrival, and night time foray through the jungle, was not a secret.

You guys were riding at night last night. I warned you about that. It is really too dangerous Joe. You guys have to try to stick to the schedule that we laid out on the itinerary.

I quickly thought of what it might have been like to hit a dog, or a goat on that trail through the jungle last night. A couple of hours from help of any kind. In the rain. And cold.

We’re just getting ready to hit the road now Court – no worries. We’ll make adjustments along the way if we need to. We’ll be off the road before nightfall tonight.

It was kind of like being scolded by a parent, but it also made it really obvious the safety is paramount with this outfit.

As the day before, Flash and Indiana took off on their own.

So, with renewed energy, we gathered our gear, finished off our coffee and hit the road.

The mornings journey took us through some really nice twisty roads, both asphalt and dirt. We travelled straight through a couple of small villages, nodding or waving to the locals as we passed. Again I found myself suffering an almost sensory-overload. The landscape, the buildings, the people, the domestic and wild animals alike – all of it was vying for my attention.

We followed the GPS route laid out by Ecuador Freedom Bike Rentals that brought us to Las Mercedes and then way back up into the Andes, riding through the heart of plantation country. Coffee plantations, chocolate plantations, banana plantations – huge tracts of mountainside that are used to cultivate the most important and valuable crops in the country. And yet, as we rode by on our bikes, looking at the homesteads, I was struck by the hardscrabble life of the locals. Cinder block walls. Grass thatched roofs. There was no sign of affluence amongst the farmers.

As I ride along, I am struck by the beauty of the landscape and an appreciation for the simplicity of life in these villages.

The route that we followed that morning was largely paved, and the asphalt was in decent condition. Narrow and twisty, the route continued to demand all of a riders attention. Gaze a half-second too long at the misty mountain tops and you may find yourself careening off a cliff!

We followed the narrow mountain switchback roads until we arrived at Ruta 20, a busy little junction with two or three roadside food-stands, a gas station, a garage, and several people seemingly just milling around.

We crossed the highway and parked our bikes, opting to have some lunch here at Asadero El Manaba. 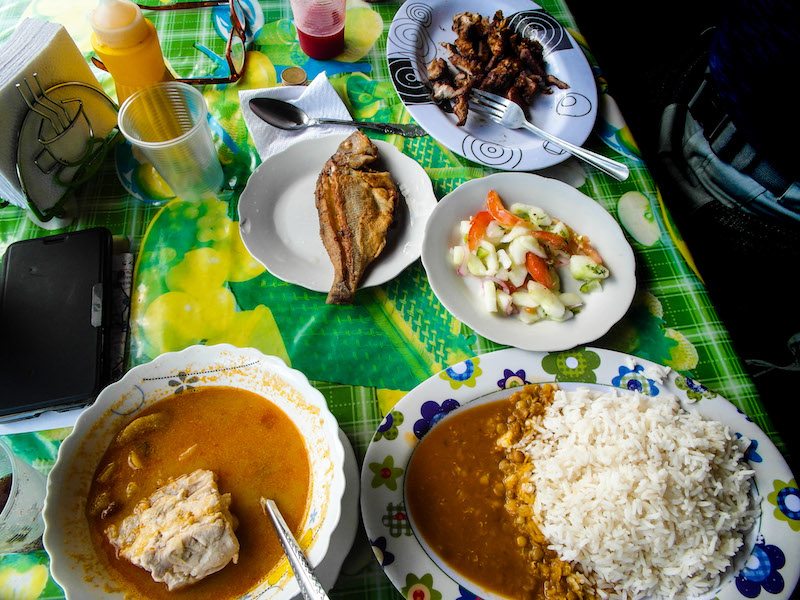 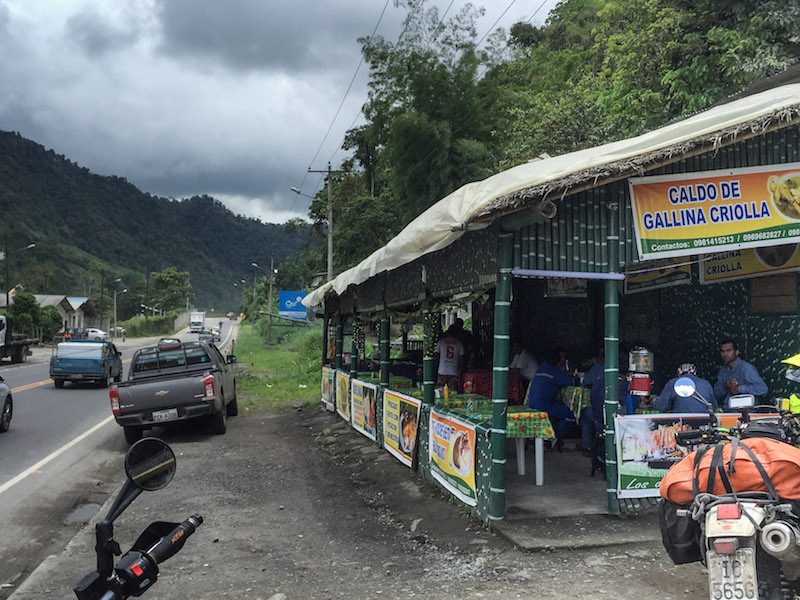 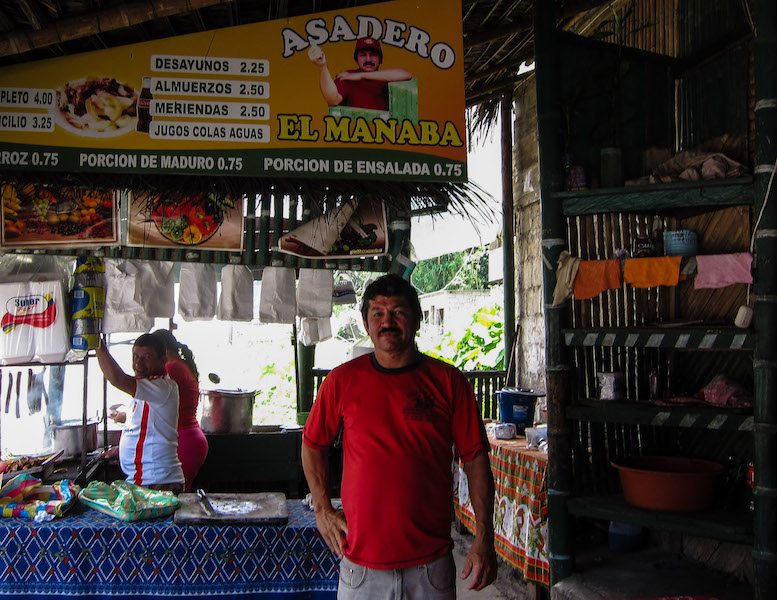 I had the common lunch meal of a chicken-based soup with a thick broth and potatoes.

While in this village I spent some time observing the locals as they went about their daily lives; waiting for the bus, getting gas, having lunch with coworkers and colleagues. The same things that millions of us do at home in North America. The difference being, that is all that they were doing. They were simply attending to the task at hand, rather than attempting to multi-task their lives away.

Say what you will about developing countries, I still find myself enamored by the simple and less-harried way of life. And with more than 39,000 Americans living in Ecuador, I dare say I am not alone. 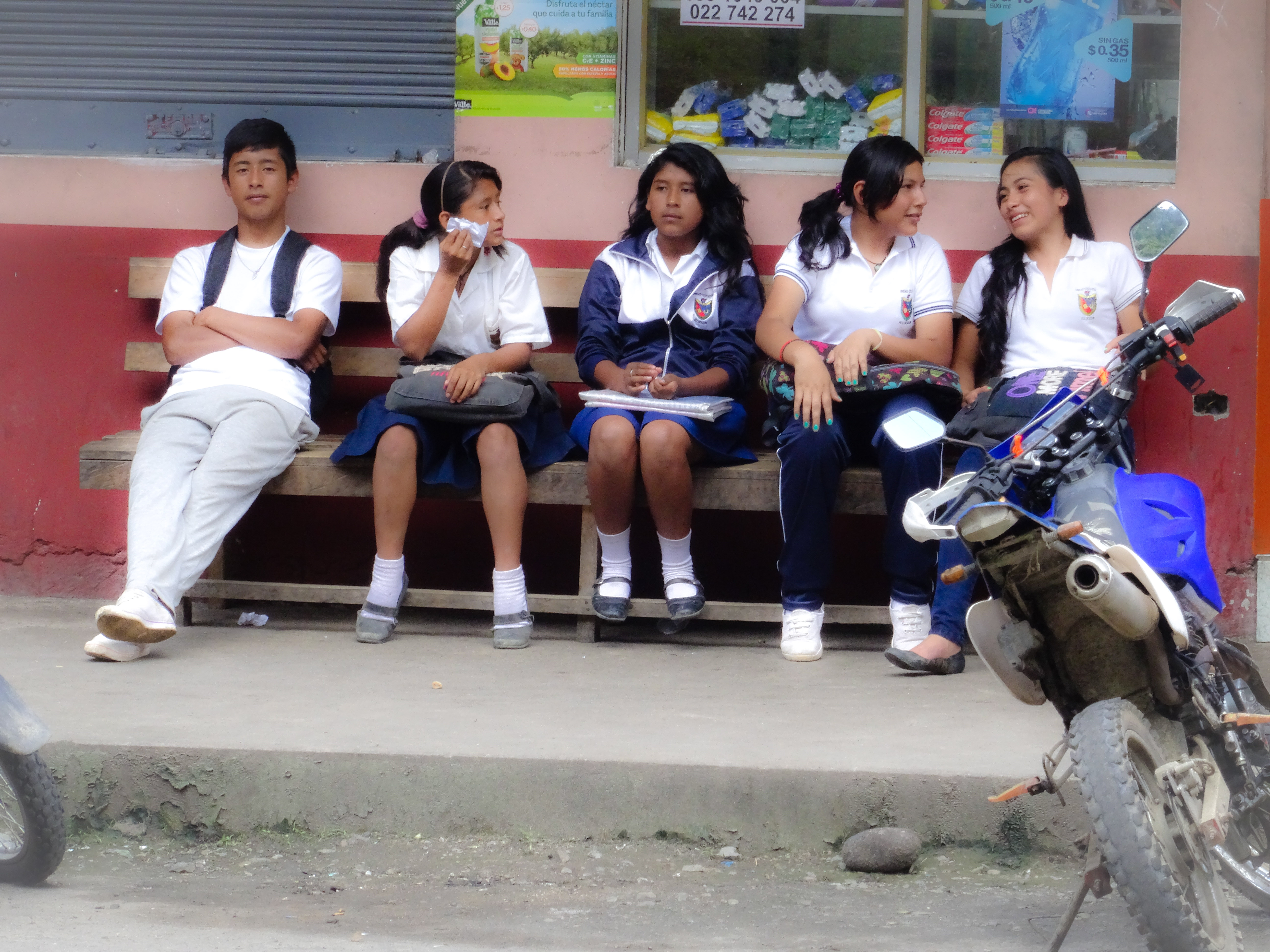 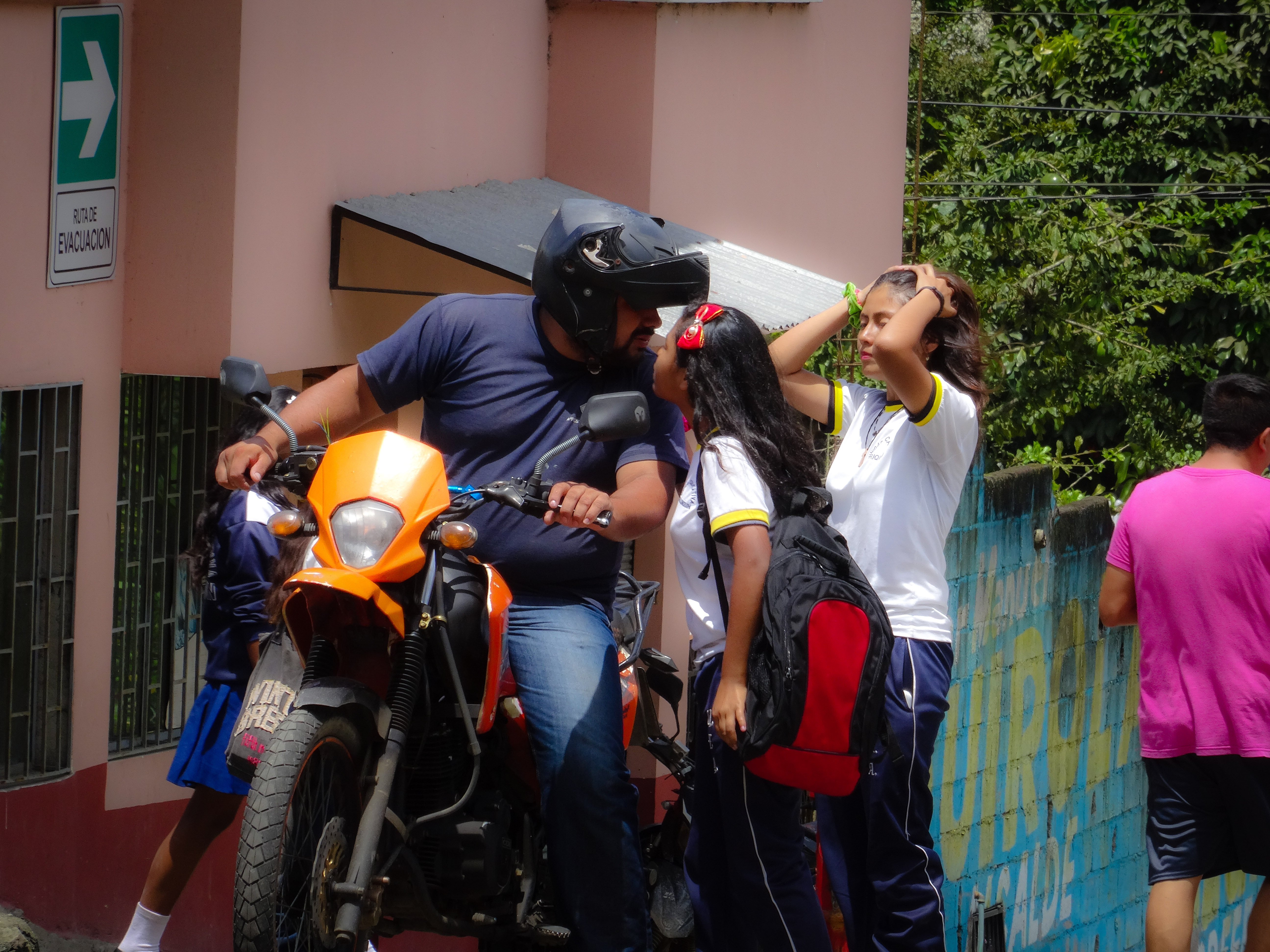 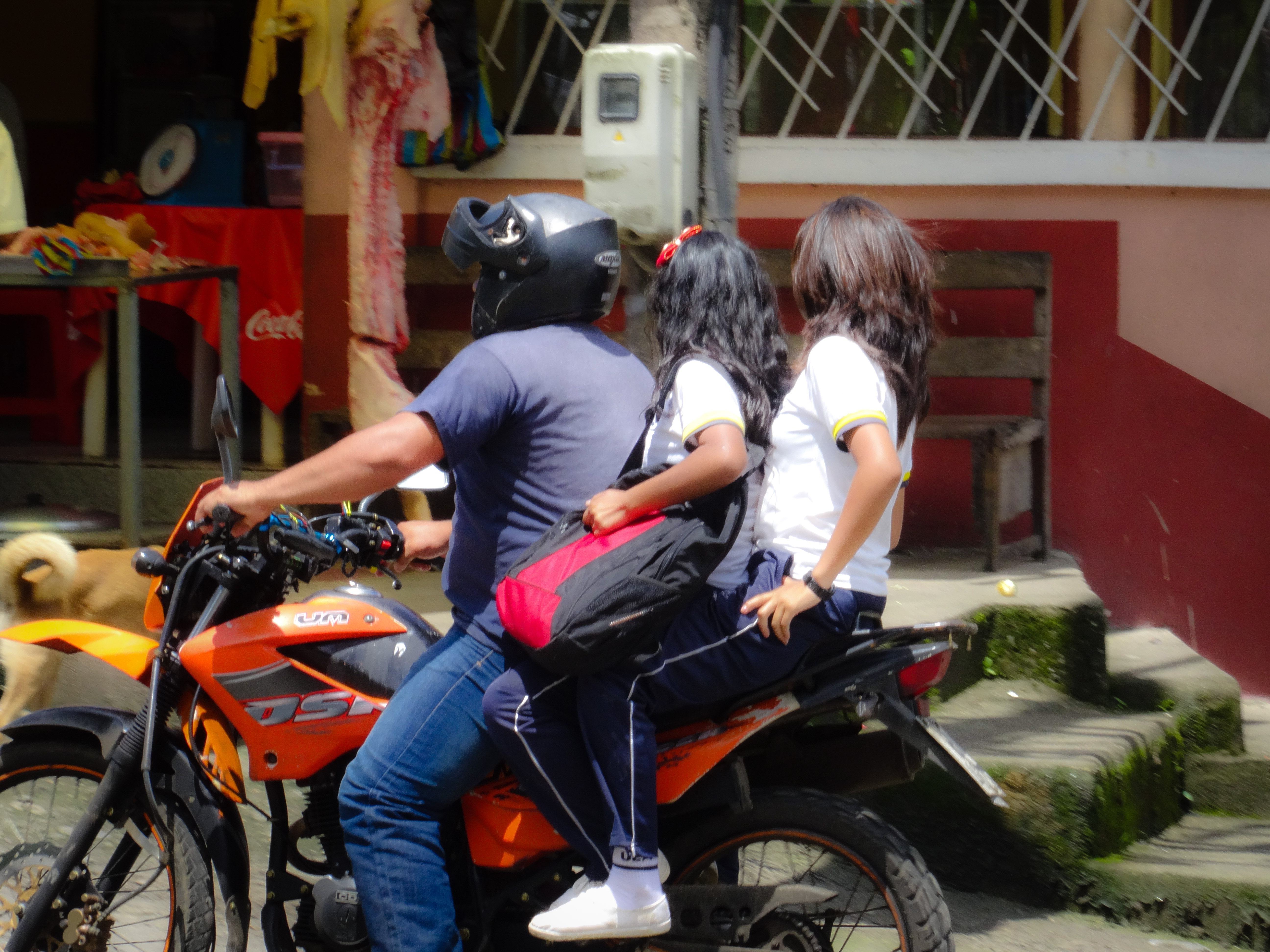 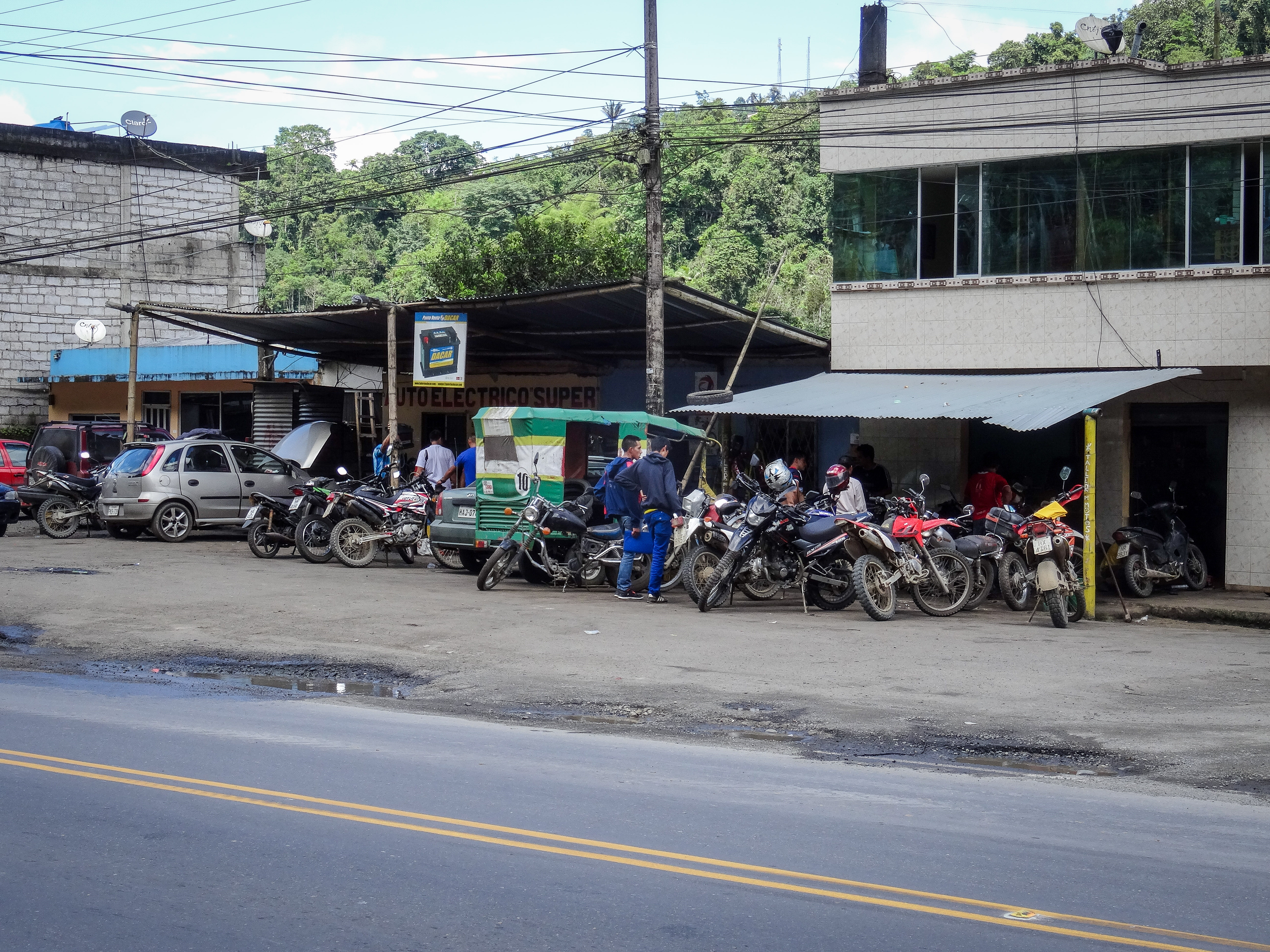 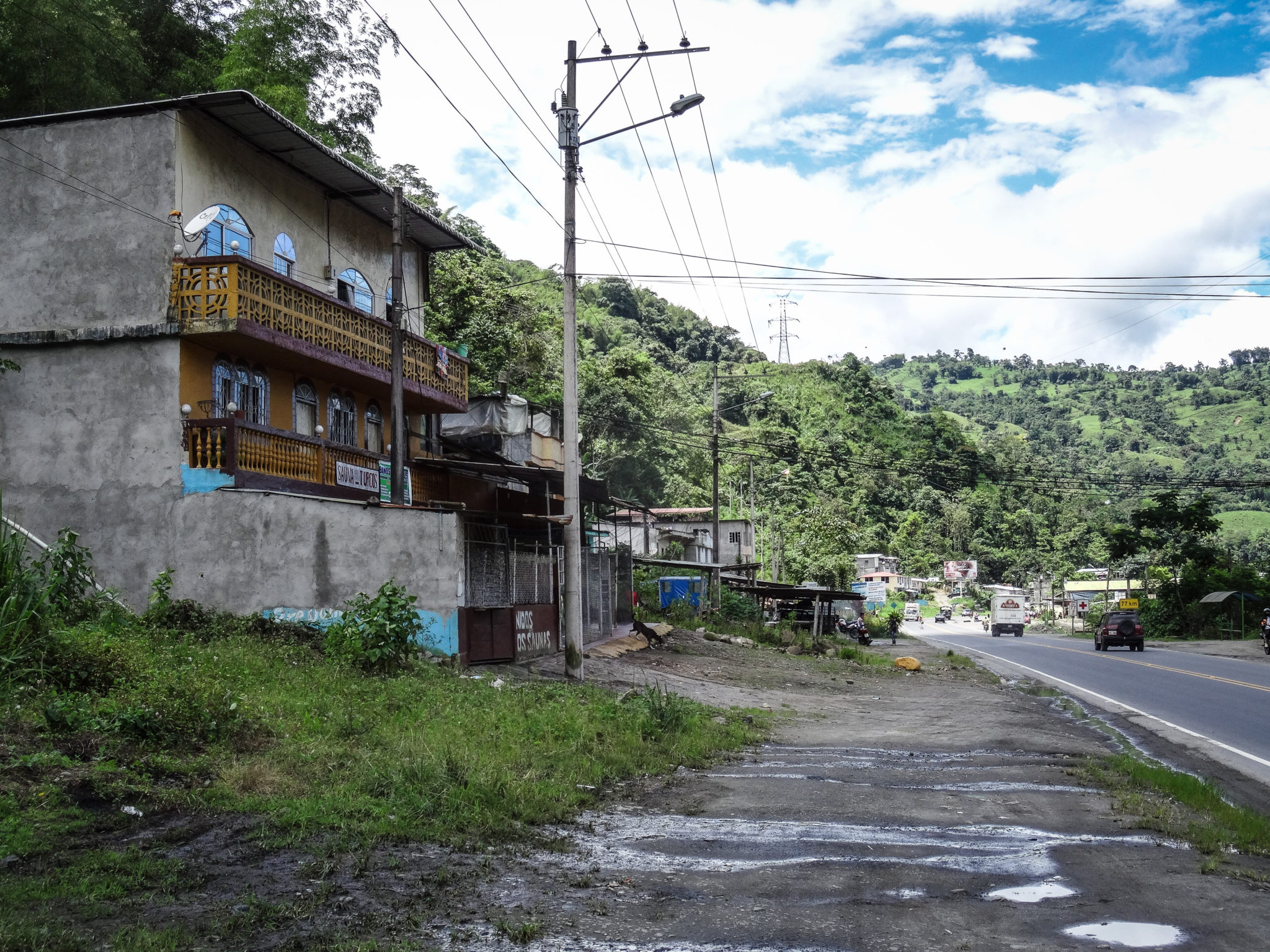 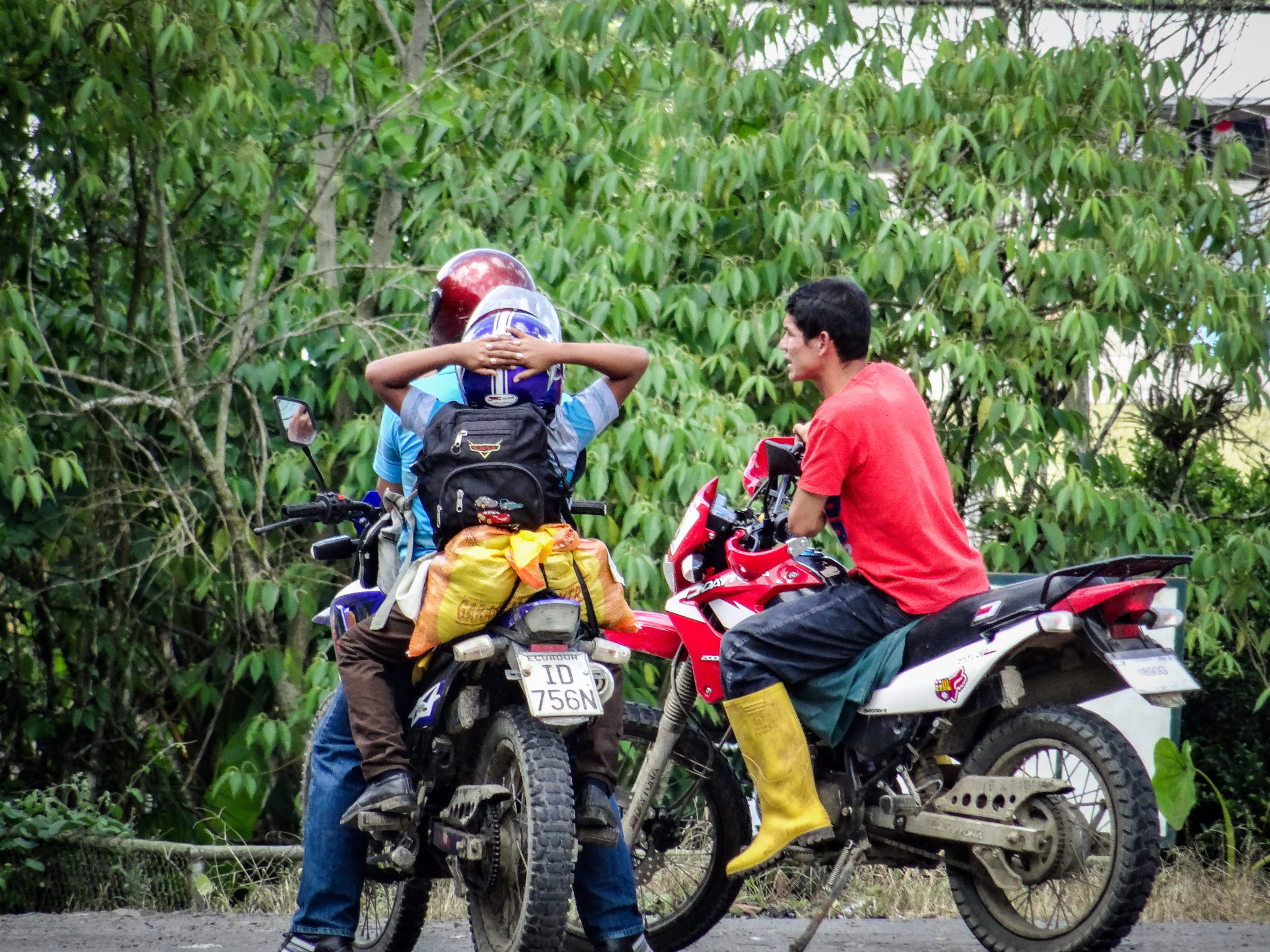 We finished our lunch, thanked the owner and got back on our bikes. Our next waypoints were San Francisco de las Pampas and then Sigchos. We were back on dirt roads in short order, and soon found ourselves back on the roller coaster climb-and-descent, climb-and-descent that was such an integral part of this adventure. The scenery, the people, the natural beauty and the incredible challenge of the roads that we were riding continued to stretch my smile, and the four of us were truly having the time of our lives.

It was shortly after leaving Sigchos that my adventure took a bit of a hit. We were riding downhill, once again descending out of the mountains on a wide, smooth and easy-to-ride dirt road, moving at a good clip, when I noticed that I was lagging a little beyond the rider in front of me. I accelerated in an effort to close the gap, watching Yun-Kan navigate a long, wide sweeping left hander, and realized too late that I was riding too fast to make the curve safely.

I covered the front brake without applying any pressure, dropping the toe of my right boot onto the back brake pedal and applying brake in as smooth a manner as I could.

The back wheel locked up almost immediately and in a flash I knew this was not going to end well.

To make matters even worse, this curve – like many of the mountain road curves that we had already travelled – was off-camber. The curve was actually banked to the outside, allowing mountain run-off to wash across the road and into the concrete drainage ditches that have been constructed in an effort to fight wash-outs.

It was the concrete drainage ditch that caused me the most concern. My eyes found it, and I could not pull them away.

I dropped the bike into a low-side slide, my left boot, knee and thigh sliding along the edge of the road as I fought to keep the bike following the curve.

It was going well, until it wasn’t. The bike quickly trenched too much gravel to continue its slide and in a flash I was thrown up and over the bike in a high-side.

Somehow I managed to twist the air and landed hard on my Klim hydration pack, my Arai XD4 hitting the earth hard with a resounding smack.

It took me 30 seconds to get breath back into my lungs – the wind had been completely knocked out of me – and at that point I was able to answer Dave, saying “yes, I’m okay, please pick up my bike . . . “

I missed landing in the concrete drainage ditch by mere feet. I hate to think of what that may have done to me.

I began to chastise myself internally. I had just made one of the most dangerous – and amateurish – mistakes that a rider can make: object fixation. If I had looked at where I wanted to go, instead of focusing on what I did not want to hit, I very likely would have made it through the curve safely on 2 wheels, instead of going airborne and landing on my back.

David got my bike up onto the side-stand, and I slowly got to my feet to shake it off.

It took two breathes to realize that something wasn’t quite right – my chest was killing me!

I chalked it up to being winded, and we began assessing the damage to the bike, which was surprisingly minimal. The throttle-side handle bar was bent down towards the tank – it looked like a clip-on now – but that was pretty much it. No bent levers, no cracked plastics, nothing. The mighty DR takes a licking!

I got on the bike – David keeping a close eye on me to be sure that I was okay to ride – and we continued on our way, riding to catch up to Yun and Roger.

They had pulled over a little way down the road and in short order the four of us were discussing my off. And at that point my right side lung felt like it was on fire. Interestingly, taking deep breathes did not hurt at all. I think, looking back on it now, that I may have collapsed my right lung with the force of the impact, and the pain was a result of the lung slowly re-inflating. But then, I am no doctor.

The guys all gave me their version of a quick assessment and within minutes we were back on the road, riding towards our final destination for the day: Mama Hilda’s Hostel in Chugchilan.

The worst part of the next leg of the journey was the pain that I felt in my chest as we descended several thousand feet out of the mountains again. This convinced me that my amateur diagnosis was correct; I had collapsed a lung, and the change in air pressure as we descended was causing me more pain. I began to take long, shallow deep breathes focusing on filling my chest, and eventually the pain went from almost unbearable to not much more than an annoyance.

Of course, the adrenaline had worn off, so other aches and pains were starting to surface, the worst being my tailbone. It hurt something fierce.

I kept up a brisk pace for the rest of the ride and although we all stopped to take some pictures a few times, we made it to the hostel by early evening, beating Flash and Indiana to our lodgings for the night.

David noticed that his front tire was going flat just as we pulled into the courtyard and that became the task for the evening – once again – fixing a flat front tire. 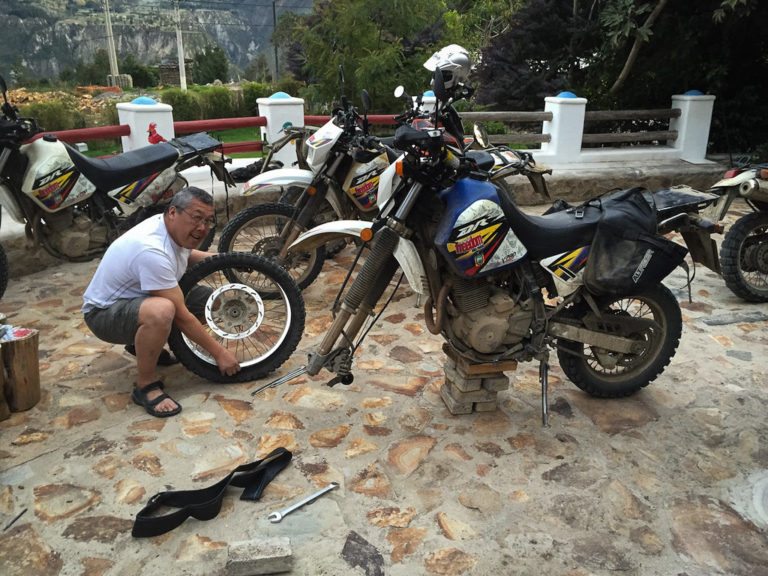 Flash and Indiana arrived just as Yun was finishing up on David’s bike and began to tell us the tale of their adventure that day. Flash reported that they would have arrived hours ago, were it not for the fact that he had spun the rear bearing in the cush-drive of his DR650. That could have been a ride-ending mechanical failure, but the luck of the adventure rider was with Flash and his breakdown had occurred near a small mountain village where a local had managed to repair his bike for him. According to the story, while there was no chance of locating a cush-drive bearing for a DR650 anywhere within a couple hundred miles, an enterprising mechanic pulled a bearing out of an old generator that was sitting under a tarp, cleaned it up, and fit it to Flash’s bike.

I would ask “what are the odds?” but apparently the odds were 100% in their favor.

We ate a magnificent meal together, chatted about the days ride and laughed about my wreck – laughing brought renewed pain, but not too bad –  and I turned in early. 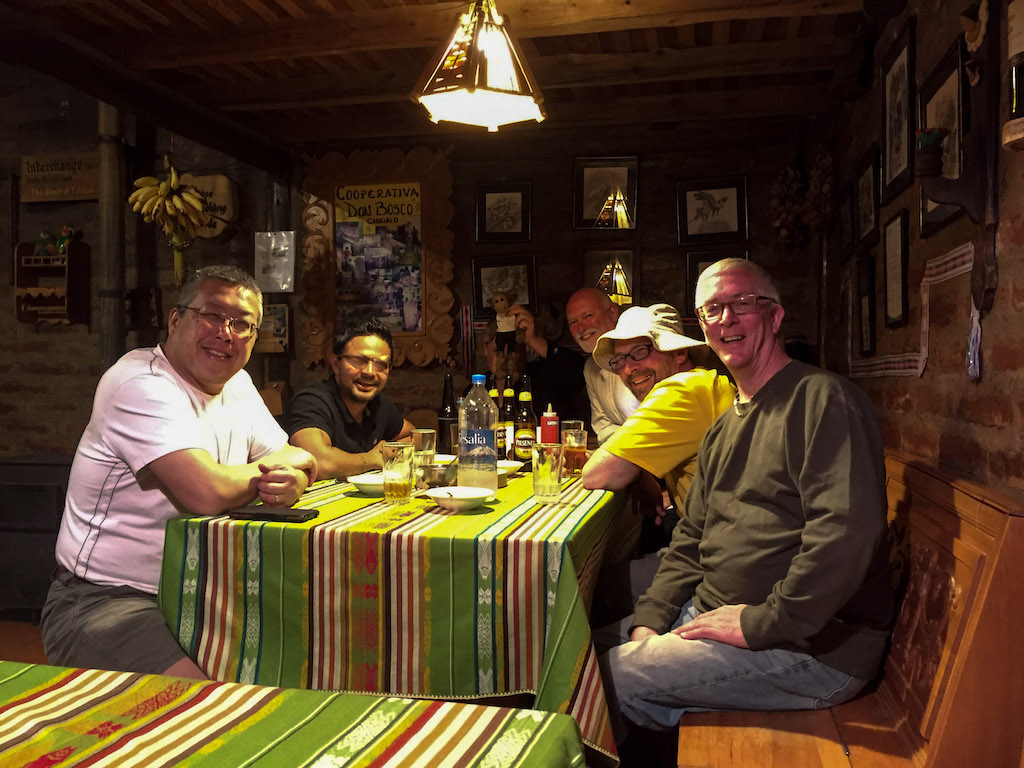 My tailbone was far more painful than my back/chest/lungs by that point, and I found myself hopeful that the morning would bring healing with the sunrise . . .

UP NEXT: A Teeth Jarring, Skid-Plate Peeling, BANG