The morning of the fourth day of the ride broke beautifully. The sunrise was like something out of a Steven Spielberg film. 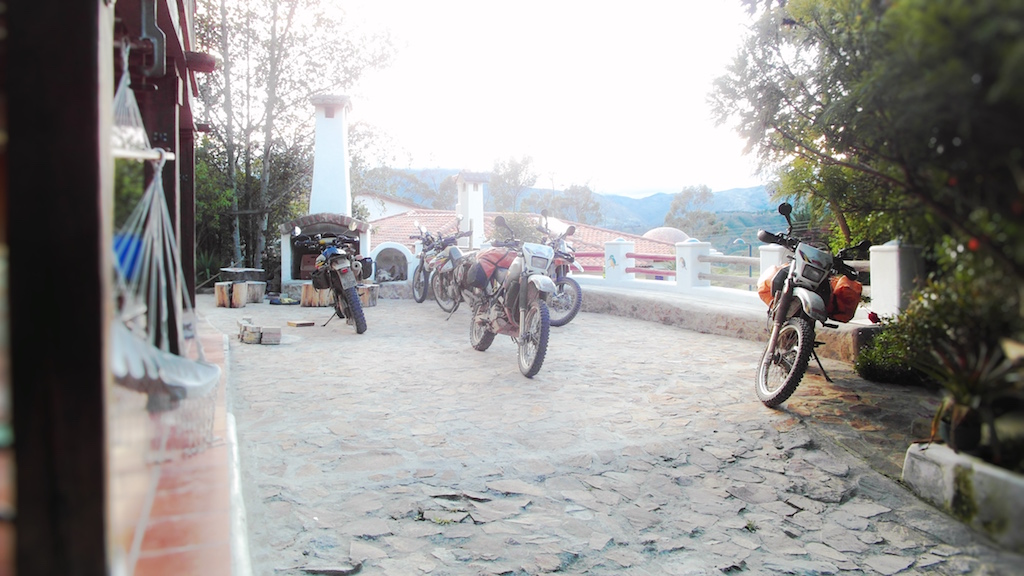 The pain in my tailbone was like something out of a John Carpenter film.

Thankfully, my ribs and chest were feeling much better. 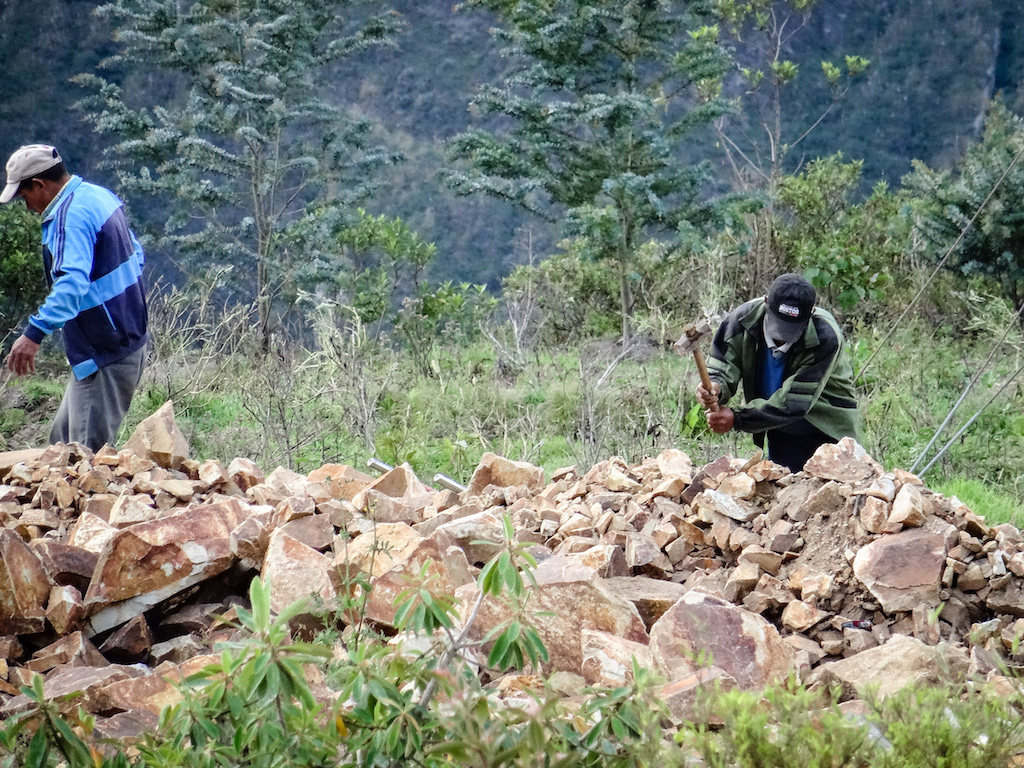 I took some morning photos, my attention caught by two laborers who were breaking a pile of rocks into smaller rocks.

With hammers. At sunrise.

We gathered in the dining hall and ate another wonderful breakfast together, chatting about what the day may bring, wondering if David was destined to get yet another flat, excited to carry on with our adventure.

I had no idea at the time that it was to be my last day of the ride.

This morning saw Flash stricken with a traveler’s stomach, the trots keeping him close to a toilet. He bowed out of the day’s ride, opting to meet us later in the evening at that night’s lodgings, or at worst the following day.

David, Indiana, Yun, Roger and I all geared up and hit the road, riding through the village and then off into the mountains in the chilly morning air. The first half-hour or so was a thrilling ascent to 14,000 feet on a narrow switchback road. Unfortunately, I only had a GoPro mounted to my front fender activate, so the footage is to shaky to be watchable. Fortunately, Yun-Kan had his chin mount activated and shot some great footage as we left town and descended into a valley between mountains before racing up the mountainside where we stopped for a short break and to catch our breath.

After a short ride later, we made it to one of the most beautiful places on a tour of beautiful places – Quilotoa Crater Lake, formed by an enormous volcanic eruption 800 years ago. A small entry fee allowed us into the tourist area and up onto the caldera’s edge, granting an incredible view of the lake far below us. 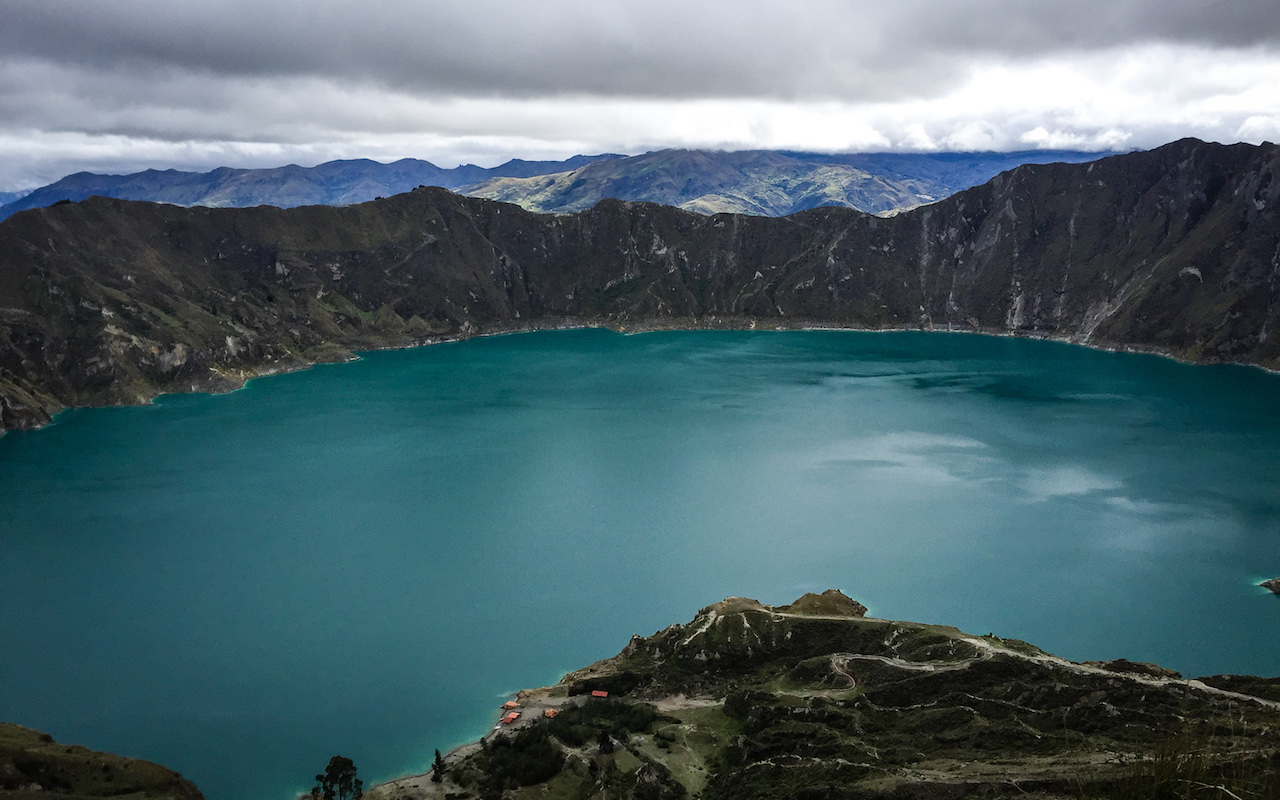 We stayed for about 20 minutes, taking some pictures and enjoying the beauty that lay before us before getting back on our bikes and riding back into the Andes.

The ride continued as it had to this point – amazing vistas, incredible elevation changes, cloud-riding on at times fast, hard packed dirt and at times treacherous, wet and slippery mud.

We were continuing to have the time of our lives.

After another hour or so of riding we came into a tiny little Andes mountain village with cobblestone streets lined by continuous structures on both sides that contained everything from housing to animal stalls and pens to workshops and everything in between. As we came into the village centre it opened up into the town square – a prominent feature in every town, no matter how small.

There was a large cooking station, most of the townspeople sitting at the purposely set out tables enjoying a large bowl of thick soup. We parked our bikes, unable to withstand the lure of the tantalizing aromas wafting into our helmets.

As we had come to expect, the soup was delicious. Hearty and full of flavor and spices, it seemed almost inappropriate to pay only $1.50 for such a fulfilling meal.

My last bowl of soup in Ecuador, it turned out.

Here is where things went a little south for me.

As I was paying for my soup, I heard a couple of bikes start up. Looking over I noticed that my riding partners were already all geared up and getting ready to take off, so I hastily zipped up my jacket, pulled on my helmet, donned my gloves and climbed aboard my own DR650.

I looked up expecting to see the guys waiting on me, but instead saw the last glimpse of Yun’s hi-viz helmet as all 4 of my riding partners left the square, heading off down the narrow cobble stone road that led down the mountain and into the jungle once again.

I was perturbed, to say the least, but having a GPS with the route loaded on it left me confident that this was a none-issue, and that I would catch up along the way.

I started my bike, looked down at the screen, and was greeted by the words “Make a U Turn”

My GPS, it seemed, thought that it was off course. F@#k. Now I had to catch up really soon, or lose the guys at the first fork in the road.

I dropped the bike into first, twisted some throttle and took off with a nod and a wave to the wonderfully friendly people of the tiny little village.

The cobblestones were wet, and the road went downhill and curved to the left rather quickly. Only about 8 feet wide, and lined on both sides by tall grass, I knew 2 things almost immediately: I was going to lose traction on the mossy, wet cobblestones and go wide; and that was okay because the tall grass would provide the necessary traction to correct my course.

I went wide, running off the cobblestone path and into the long grass on the outside edge of the curve. I felt the tires bite into the underlying earth, and smiled as I began to throttle out of the grass and back onto the road.

A teeth jarring, skid-plate peeling BANG later and I was on my back in the middle of the road. Seeing stars and wondering what the hell had just happened.

UP NEXT: A Poultice And A Hard Ride To Facundo Vela, Ecuador