A Poultice And A Hard Ride to Facundo Vela, Ecuador 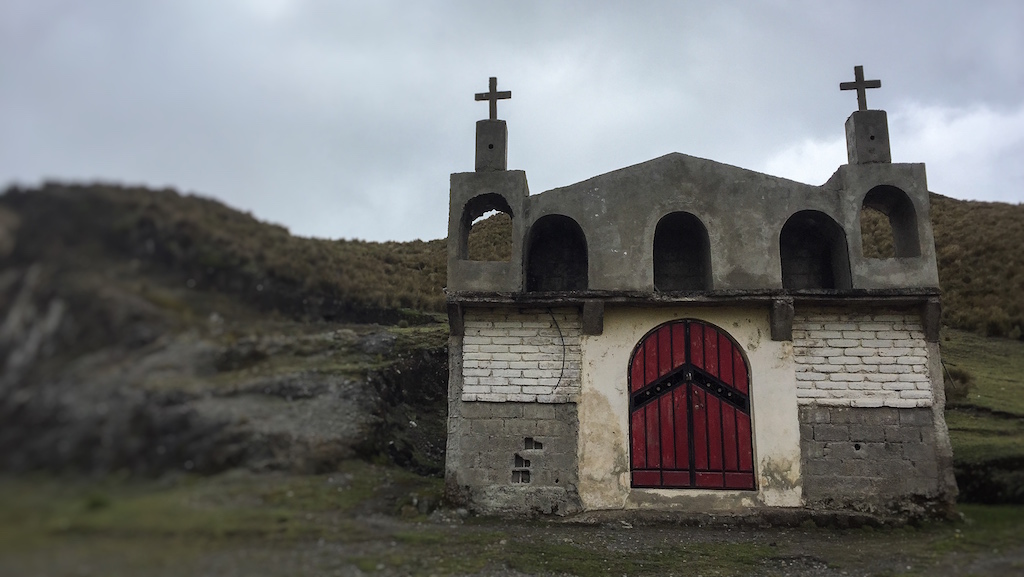 I lay there for a minute, doing an on-my-back assessment of my limbs and gathering my senses. I lay there a few moments longer . . . thinking that surely I will hear the sound of my buddies returning to see what was holding me up.

The light rain on my face and the pain in my right side convinced me that I should at least try to get up.

Ok, adjustments had to be made. I rolled left, got to my knees, and then slowly regained my feet.

The ribs on my right side were on fire.

And the vent tube on my bike’s gas cap was spewing gasoline.

I did a slow circle, looking to see if I could determine what the hell had just happened.

The evidence lay behind me in the middle of the road. A large boulder the size of microwave oven had been pulled from its place of residence in the tall grass.

My front tire had hit the outside edge of the rock, hard enough to ding the rim and put a hole in the tire large enough to insert my finger into. The tube, of course, was likewise punctured.

The wheel had been kicked to the left by the boulder, but the skid plate collided with it full force – hard enough to peel it back like the lid on a can of sardines.

That was the impact that through me, and the bike, for a loop.

And now I had to pick up the DR650 with what felt like cracked or broken ribs.

It took me three tries, but I got her up onto the side stand and then, exhausted and in increasing pain, I decided I had had enough, took off my jacket and proceeded to sit as comfortably as I could against the grassy bank that mere minutes before had a boulder torn out of its dark earth by a careless rider.

At worst I figured I had a 10 minute wait before my friends noticed that something was amiss.

I had been sitting in the grass less than 5 minutes when a family of four – mom, dad, daughter, and son came walking down the cobblestone road. After a few futile attempts to get a cell signal, the father spoke rapid-fire Spanish to his son, smiled at me and gestured that his son would take care of me. At least, I think that was what he meant for me to understand.

The young lad – no more than 7 or 8 – smiled at me and motioned for me to follow him back towards the village.  I could not ride the bike due to the flat front tire so I started it up, dropped it into first and struggled alongside as I idled it along.

I had to stop every 20 meters to catch my breath, and the pain in my side was raging, but we made it to the village square in short-order.

The woman who had cooked and served our earlier bowl of soup saw me favoring my side, and in less than 60 seconds she approached me with a steaming poultice made from an embroidered silk handkerchief, steaming water and untold herbs. 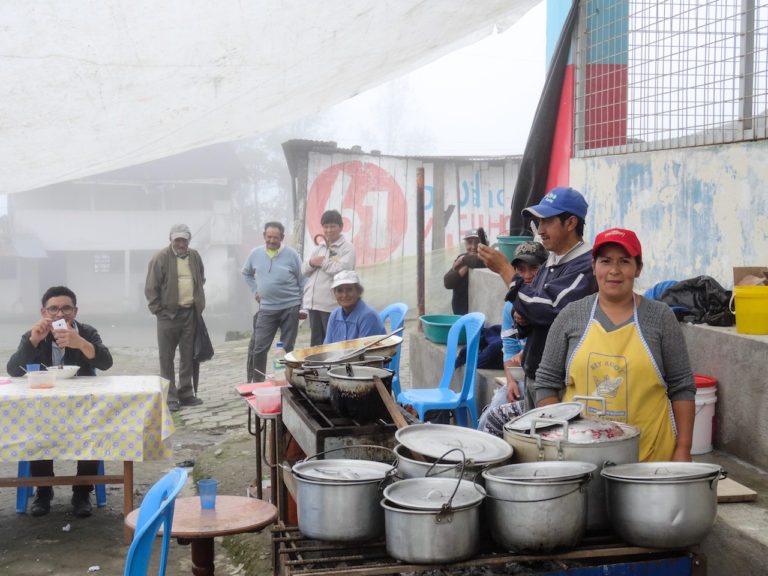 All I could do was smile in gratitude as she lifted my shirt and applied her traditional medicine to my less than traditional injury.

The young lad headed up the hill while I rested in the square and returned in short order with a congenial man in his 50’s who seemed to think that my situation was none too dire at all. At least, not as far as the bike was concerned.

I followed him up the hill to his shop which was in one of those continuous buildings that I had mentioned earlier. I had to chuckle as a rooster and a couple of chickens came charging from the doorway in a flush of feathers, the banging and clanging of a man on a mission coming from within.

A minute later he emerged, smiling broadly as he held up an old tractor-tire inner tube in one hand and a bicycle tube repair kit in the other.

Apparently this fellow figured that he had all he needed to get me back on my way.

I pulled my tool pouch from the stock tool holder and set about removing the front wheel. Cracking the front axle was enough to make me grunt in pain, but in less than 3 minutes the wheel was off and the erstwhile mechanic disappeared into his shop.

I had nothing left, and found a bench to sit down for a bit while he attended to patching my tube and my tire.

I happened to glance up across the street and realized that I had become something of a source of entertainment: 6 or 7 people were sitting across the way, watching the gringo who broke his bike and was obviously finding it difficult to breathe the pure mountain air. I smiled back and waved. And then I noticed the young lady.

On a cordless phone. YES!

I was going to be able to at least call Court at Ecuador Freedom Bike Rental and tell him what had happened and my current situation.

And as fate would have it, when I got Court on the phone he told me that he was currently on the other line with the guys, who had noticed that I was missing once they got to the next town . . . almost 45 minutes down the road.

I explained my situation and Court relayed the information to the guys.

Only David and Yun returned. Roger and Indiana opted to wait where they were, not wishing to navigate the slippery mountain roads again.

I had expected my fellow riders would have turned around within 10 minutes of my wreck – but in reality – it was 45 minutes before they noticed me missing and over 90 minutes before any of them showed up. And I was pretty damned pissed . . .

I did not have much to say to Yun or David for a while, but, we eventually talked it all out. Though I must confess that I did harbour some resentment over being left behind – at least until my ribs healed.

My newly acquired mechanic eventually came out of his shop, a look of triumph on his smiling face, and handed me my freshly inflated front wheel.

I cannot express the gratitude that I felt towards this man.

His family balked when I pulled a $10 bill out of my wallet. Foolishly, I thought they expected more. On the contrary, they told me that $10 was too much, that $2 would be enough.

I squeezed the $10 bill into the smiling man’s hand and held my hands up in a gesture to say that I would not accept it back.

Yun helped get the wheel mounted back on the bike and once again dropped my bike into gear and continued the ride.

Yun and David both kept me well within their sight – Yun leading, me in the middle and David riding sweep.

The conditions were worsening by the minute – a steady drizzle had been falling for 2 hours and the rusty-orange clay road was turning to slick mud.

We took it easy until we made it to the spot where Indiana and Roger were waiting, explaining my suspected cracked ribs and significant pain as well as my less that complete confidence that my front tire would hold.

Everyone agreed that we would stick together, riding at a steady pace to the evenings final stop at the Hotel El Refugio in Salinas.

Interestingly, as the conditions worsened, Yun and I got faster.

So that is exactly what I did. Yun and I passed the other three riders and set a pace that kept us both well on our toes. There were sections of mountain road that had a veritable stream flowing right down the middle, and other areas where entire portions of the road – often the inside line of a curve – had washed away and crumbled down the mountainside.

It was the most incredible riding I have ever done.

This went on for quite some time – well over an hour – before we again found ourselves on roads that were just too dangerous to travel quickly. Riding through banana plantations in fog and mist so thick that we could barely see 10 feet in front of our bikes, we all slowed way down and allowed caution to rule the ride.

The pain in my chest returned with a vengeance, lasting until the next opportunity to open the throttle a little.

I wish I had a better memory of this portion of the ride. I know that there were sights worth mentioning, and I am sure that the roads we were navigating are worthy of better description, but the pain that I was suffering virtually blocked out everything else.

It was a short time later that my ride came to an end.

Just as had happened to Flash the day before, the bearing in the cush-drive on my DR650 failed while heading up into the jungle shortly after passing through Fecundo Vela.

I told the guy’s that I had to turn back, and they all decided to follow me back to the village.

Roger found the local hotel, and in short order I had paid for a room, changed out of my wet riding gear, and gone out in search of a telephone to once again call Court.

The rest of the guys were engaged in a pretty heated debate about whether to continue on, or stay at the hotel with me. Roger wanted to stay, David was undecided, and Yun and Indiana wanted to continue. But after a while it was decided that heading off into the jungle in the rain at night for a 90 minute ride wasn’t the best idea – especially given the two bearing failures on the DR’s.

I finally got in touch with Court and explained that my cush-drive bearing had failed. I could almost hear him thinking “cripes, what next?”

Court told me that there was no other choice but to send  a support vehicle to fix my bike. The mechanic would leave shortly, and I should expect to see him shortly after midnight.

The support truck arrived 9 hours later, at 05:30. The roads through the mountains were really hard to navigate in the middle of the night, in the rain and fog.

I hadn’t slept much. The pain in my side, coupled with the manic crowing of an obviously half-blind rooster who was convinced that the streetlight outside of the hotel was actually the sun kept me up through the night.

The mechanic fixed my bike, and then checked the other DR650’s. Two more were so close to failure that he replaced the bearings in them as well.

It was at that point that I decided I had had enough. I was certain that my ribs were cracked. My tailbone hurt even worse. It hurt to sit. It hurt to lie down. It hurt to stand up. And I was self-aware enough to say “when.”

I thanked the guys for staying in town with me for the night, wished them well on their final 2 days of riding, and crawled into the back of the pick-up truck for the long ride back to Quito.

I was in a considerable amount of pain. I was exhausted. BUT, I was smiling inside, having just spent 4 days enjoying the ride of my life. 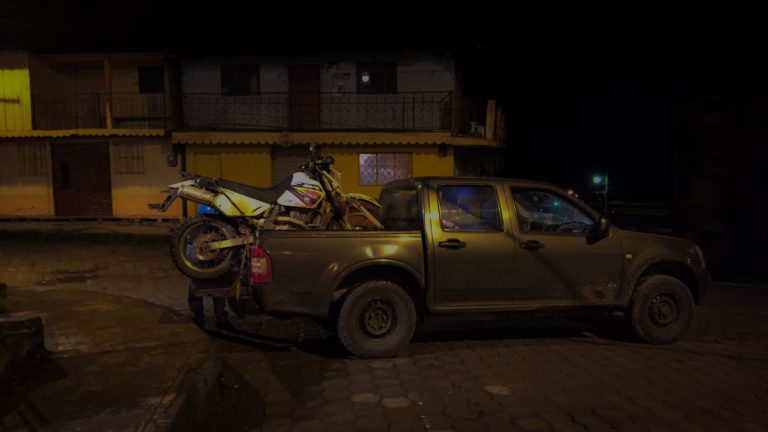 UP NEXT: A Gringo Checks Out Ecuador’s Health Care System