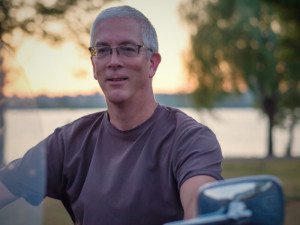 I am a middle-aged rider who learned in 2011 that my childhood yearnings for all things motorcycle had not abated one bit.

I began on a Yamaha GT80 in 1979, and loved every second of my time spent on that bike.

Life happened for the next 32 years, and I rode only sporadically.

I immersed myself completely in the cruiser-lifestyle, joined a local riding club and began to revisit my childhood passion for motorcycles.

Over the next 3 seasons I saw 75,000 kilometres roll beneath my tires – 16,000 of those on my very first ‘epic motorcycle adventure’ out to the Canadian Rockies and back.

I began moto-camping off of my cruiser, and in effect began ‘adventure riding’ on that trusty flat-black steed, covering over 1,000 kilometres of gravel roads, cheeks clenched and knuckles white, because I ‘needed’ to see where that road led, or I ‘had’ to get to that camp site.

You know what I mean.

Then, in May of 2014 on a bright, warm Sunday afternoon not even 2 weeks into the riding season, everything changed.

An inattentive cage driver made a left hand turn directly in front of me on a local 2-lane highway.

I smashed into the front-end of her car at 70 kilometres per hour, catapulted over her hood, and landed on my back on the asphalt.

My beloved Shadow was a write-off.

And both of my ankles were broken.

I spent the next 90 days in a hospital bed, both legs in casts, with a lot of time on my hands for things like reading.

I must have read every issue of every available motorcycle magazine that was issued from April until September, and in doing so, I came to the world of Adventure Motorcycles.

It seemed that every magazine that I picked up had a review, or at least a blurb, about the all-new, redesigned-from-the-tires-up 2014 Suzuki DL1000 V Strom

The rest, as they say, is history.

I had never taken one for a test ride. Never sat on her saddle in a showroom. Never even seen one in person.

What I did do was ask several of my riding buddies to take advantage of various Suzuki ride days and test drive the bike for me.

I based my decision to purchase on their feedback, as well as all of the good reviews that I had read in print.

26,000 kilometres later, we are coming up on our first anniversary together. And I couldn’t be happier.