Boots In The Water & Making A New Friend in Stewart 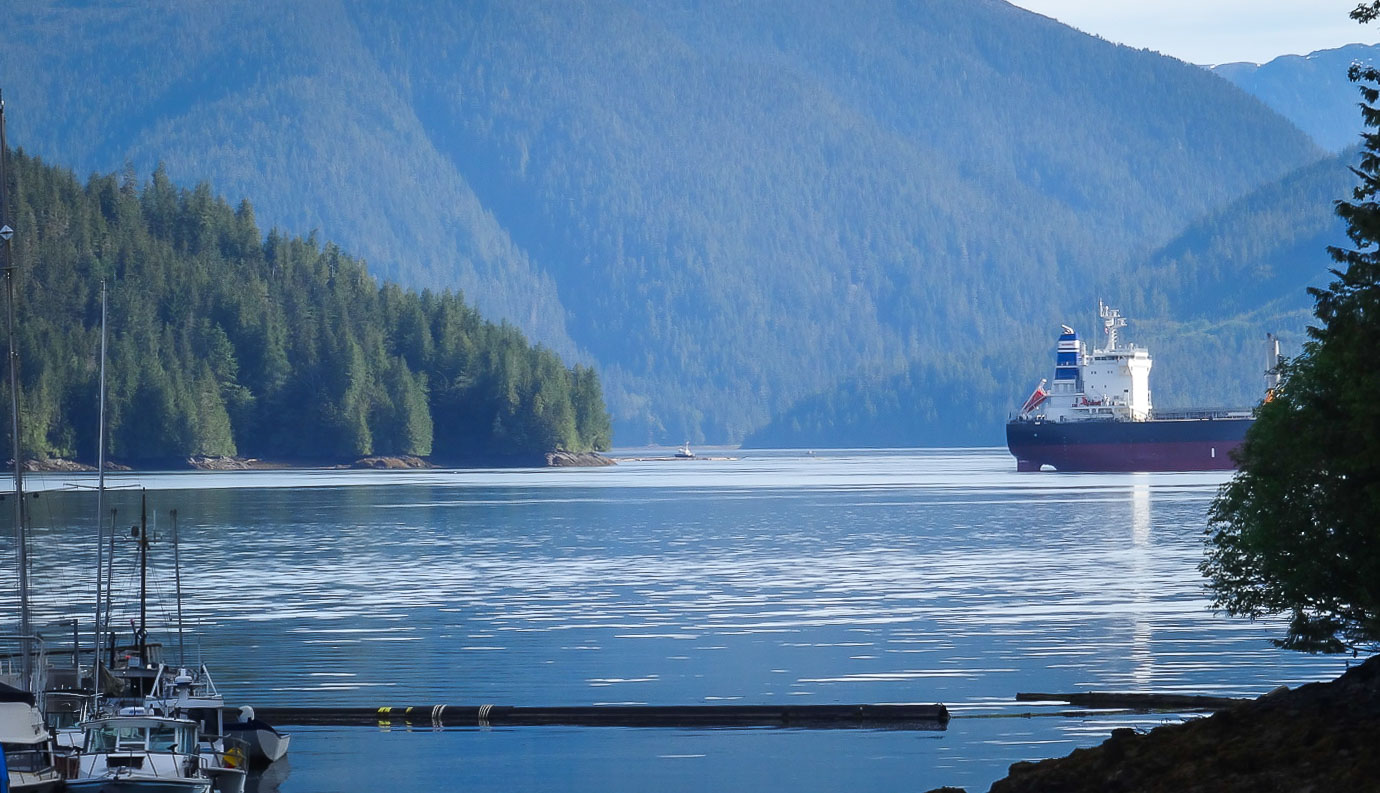 At breakfast there were a couple of local boys sitting at the table behind me, mid-30’s, sounding slightly angry about something to do with the local economy.

I turned and asked “You guy’s from the area?”

“I’m not, but he is” the quieter of the two stated, nodding toward the less-than happy to be interrupted, ex-high school football star still angry about losing his girl to the under-dog type fella that was now glaring at me.

I felt bad for the under-dog who must have suffered at this brutes hands.

Pointing to the water beyond the window, looking at me as though I were about as smart as a stump, he barked “it’s right fuckin’ there! See that water – that’s the Pacific Ocean.”

“Uh, oh, ok, thanks” I said. “I thought that was actually the Hecate Strait.”

You would think that I had learned by now not to correct the guys that think with their hands, alas . . .

The quieter of the 2 chimed in “that water right there is the Hecate Strait, but it is the Pacific Ocean friend.”

“Oh, fantastic – thank you guys, I really appreciate the help. Is there a boat launch nearby where I can just walk down to the water?”

Twenty minutes later, packed up and still chuckling to myself as I walked out to my bike to load my gear, the entire world turned on its side.

I stumbled two or three quick steps to my left, pinwheeling my arms, dropping my gear, trying to stay upright.

I had no idea what the hell had just happened, and felt suddenly quite nauseous. I took a minute to regain my senses and wait for the earth to right itself again, quickly running through a mental checklist.

Was there anything recently that forewarned of, or felt like this sudden onset of vertigo?

I remembered being a little unsteady on my feet getting out of my sleeping bag the morning before, but I thought that was just due to sleeping on an incline.

Then I realized that that particular sensation had occurred the morning after my first dose of the homeopathic arthritis medication that I had picked up in Prince George. I pulled the bottle out of my tank bag and read the label: may cause nausea, upset stomach, diarrhea . . .

So much for that medication. I slowly walked back up to my room, tossing the bottle in the garbage and thanking the powers that be that I did not experience vertigo like that while riding.

It would have been catastrophic.

I decided to wait an hour to be sure that I had my sea legs under me, had another coffee and then got back on the road.

A few minutes later, I was standing in the Pacific Ocean in Rushbrook Harbour. 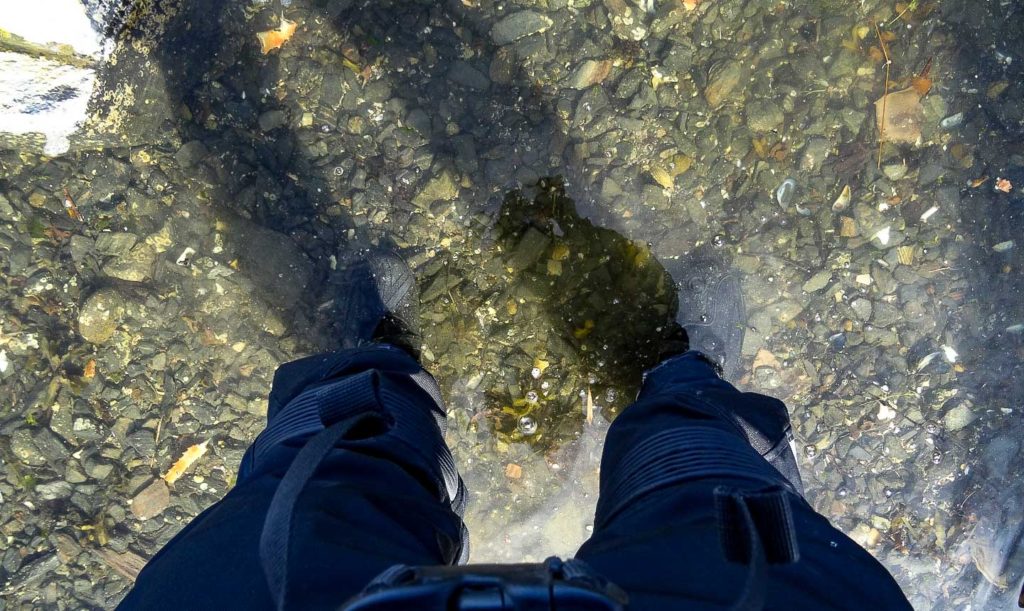 I left Prince Rupert thinking just how easy it would be for me to call it Home. Ocean to the west, mountains to the north and east – Vancouver to the south.

My riding goal for the day was the British Columbia/Alaska border. The town of Stewart on the BC side and Hyder on the Alaskan side.

The main attraction that Stewart-Hyder offers is the mighty Salmon Glacier, which, although it resides in BC, requires that you ride across the border, through Hyder Alaska and back into BC in order to see it.

Which is wonderful – unless you happen to not be allowed into the US.

As I detailed in a blog post from earlier this year, I have not always been ADVJOE, nor have I always been clean and sober. The life that I lived up until 11 years ago came at many, many costs – one of them being that I am ineligible to enter the US at this time.

I am hopeful that my recently applied for US Entry/Travel Waiver will be approved, and that new doors will continue to open for me.

For now though, acceptance of limitations is what generally keeps me safe and sound, so . . .

The ride to Stewart takes you north from the Yellowhead up the Stewart-Cassiar highway, also known as BC 37.

This highway is as picturesque as any that I have been on so far, and I found myself yet again staring in wide wonder at the natural beauty that I was traveling in and through.

Some friends of mine took a cruise to Alaska and they reckon that a cruise is the best way to see it. I’ll admit, the pictures looked stunning and I did take a look at some fly cruise deals as I was very tempted. But after this ride, I think I’ve found a better way for me to see Alaska. I was simply in awe at some of the views and scenery I was surrounded by.

At the Meziadin Junction the route bends westerly on the Glacier Highway, also known as BC 37A, and heads into the mountains, and into Stewart.

Among the incredible sights along the way is the Bear Glacier, it’s magnitude and silent power a truly stunning sight to behold. 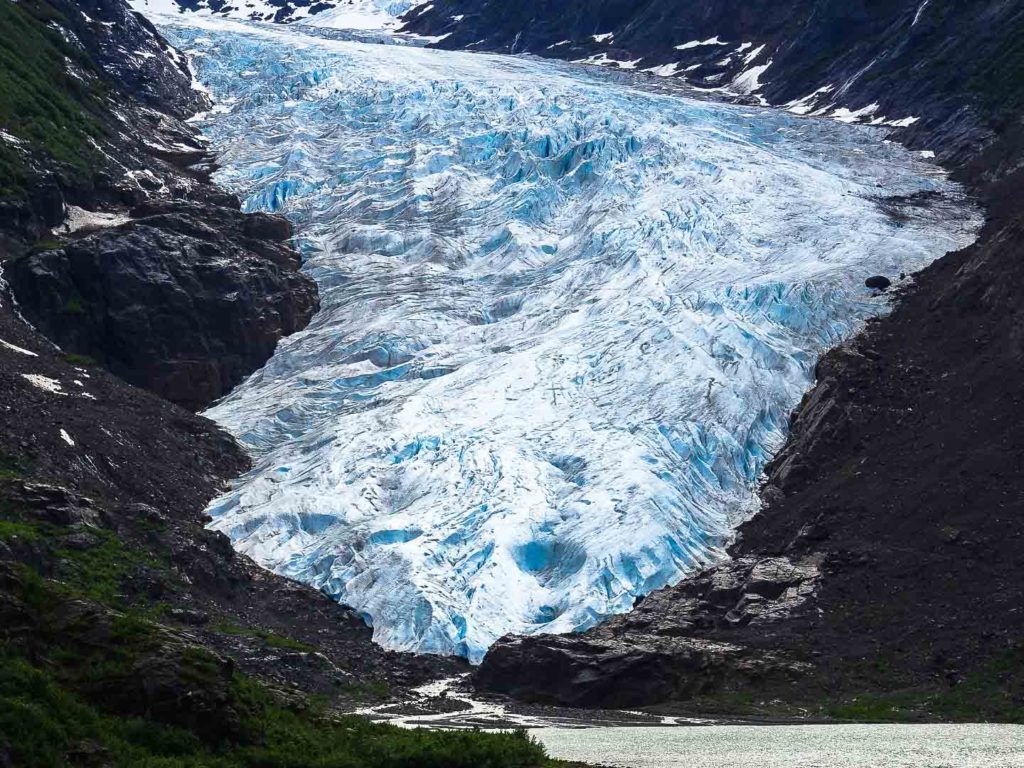 As I booked my room at the King Edward Motel in Stewart and was in the process of unloading my bike, another rider approached and we began chatting.

Tom was on a ride from Toronto to Alaska, riding a really nice BMW F800GS. His personality and sense of humor were such that I knew I would enjoy his company and we made plans to have dinner together, and ride together the next day. 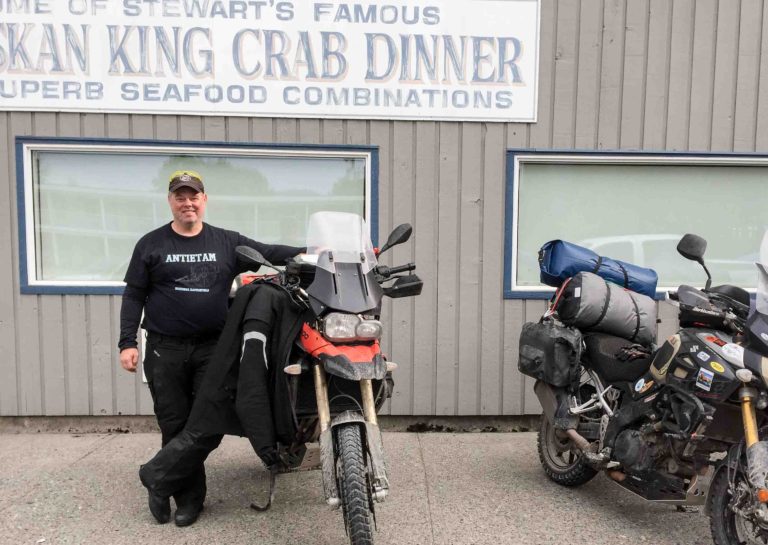 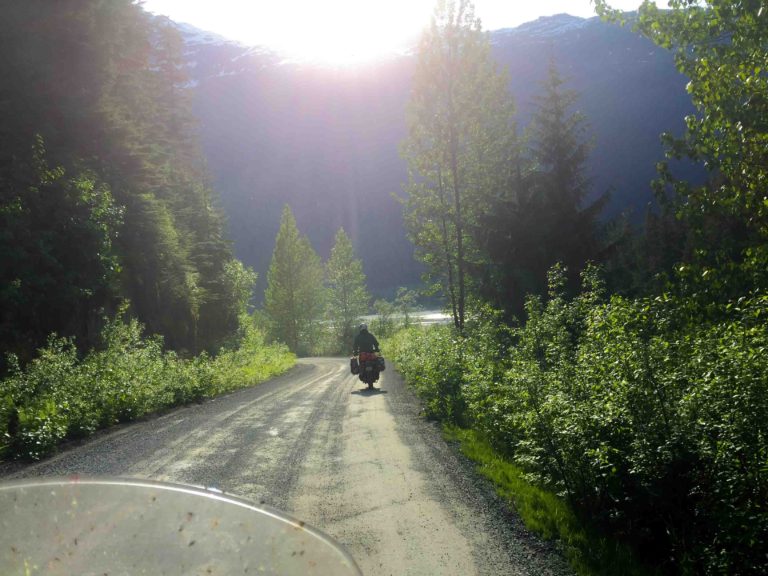 Before dinner, Tom rode across the border and got see the receding edge of the Salmon Glacier, and he was kind enough that my camera went along up the mountain with him. 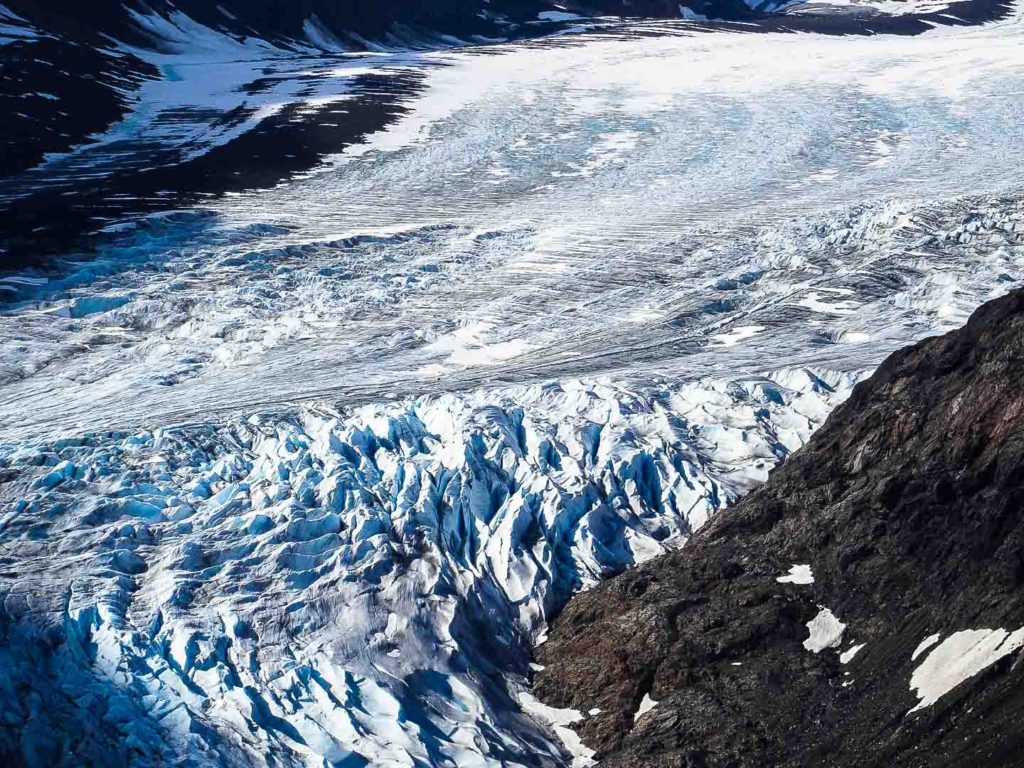 At dinner Tom I told Tom about this D2D Adventure that I am on, and with no twisting of his arm whatsoever he willingly altered his plans enough to join me for at least part of the ride.

My plan was to ride a popular adventure rider road that is also generally described as a must ride, with a couple of warnings:

Telegraph Creek Road • Not to be attempted by amateur riders; do not ride if uncomfortable on gravel; CAUTION: 20% grades; not for the faint of heart, etc, etc

Tom agreed that although he was not yet very comfortable on gravel, he would like to give it a go.

We chatted until the waitress kicked us out of the restaurant, made plans to meet for breakfast, and called it a night.

The end to yet another really good day.

Next Up: The Telegraph Creek Road

Telegraph is not a ghost town – it’s a Aboriginal historic place below the Stikine falls where the supplies from Wrangle came in from for the contential telegraph line to Alaska was outposted! It was originally a Taltan native village and gold located in the area change the way of life there . The miners moved on to Atlin and Klondike and the telegraph line never was completed as the Trans-Atlantic cable crossing occurred before the line reached the Yukon border! People still reside in Telegraph cutting a living out of the wilderness and agriculture. Telegraph has a Eco climate… Read more »

Thank you Dave. In Joe’s next post on Telegraph Creek, he does make note of TC’s history and the hearty souls who continue to reside there. On his behalf, I will add your comments regarding the unique eco climate of the area. Thank you for your comments. Are you from the region?

Hey Dave, thanks for dropping by man. I really enjoyed my visit to Telegraph Creek. Tom and I only visited the ‘old town’ off to the left at the old church. We never did go right at the intersection so we did not actually visit the current Telegraph Creek townsite.
The abandoned buildings of the original townsite sure speak a tale though.
What a beautiful ride to a beautiful location!

My wife and I went to Stewart-Hyder in 2009, so it’s great to see some of your pictures, that I recognize from our trip. You mention your US travel restrictions kept you from going over the border. You did not miss a whole lot, lol…We did cross the border, and Hyder is a really small community/village with not much going on. However we were stopped from going further North by Mother Nature. The year we went, we had to abandon one route because of forest fires, and the route north of us had a land slide and it was estimated… Read more »

Seems to be a regular occurrence up there. My new friend Tom was not able to Summit the mountain due to a slide and snow accumulation- so he only got pictures of the toe of the Glacier.
I’ll head back up one day, hopefully able to cross the border.
I’m happy that the photos sparked some memories for you Carl. Thank you for continuing to ride along sir.