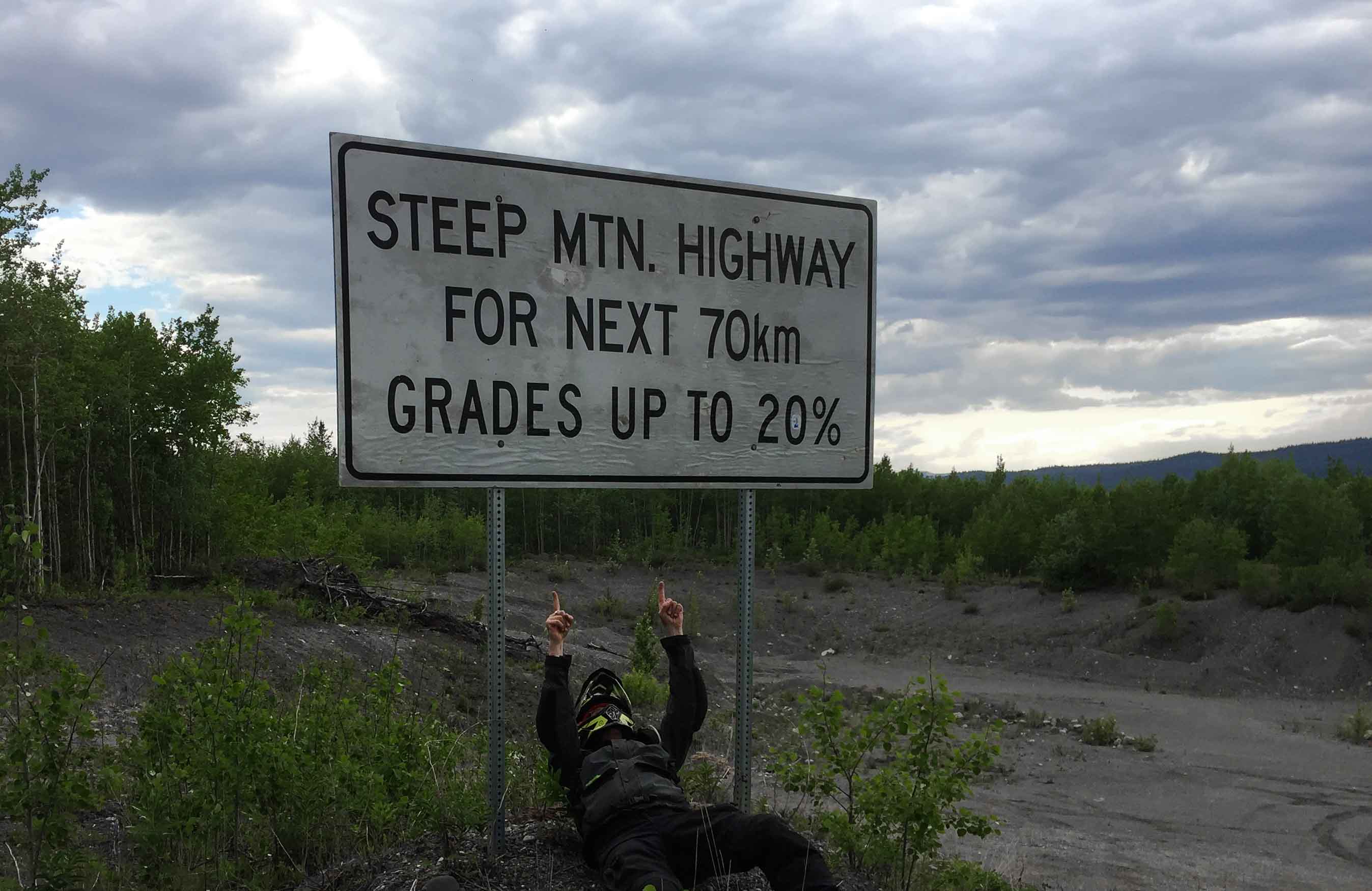 The day started out in the same manner as they virtually all have – fantastic.

And it only got better from there.

Tom and I enjoyed a great breakfast after yet another wonderful nights sleep, packed up our bikes and hit the road before 0900

Heading north towards Dease Lake, we barely made it past Meziadin Junction before we saw our first black bears – one leisurely eating berries and wildflowers and one wandering across the road. 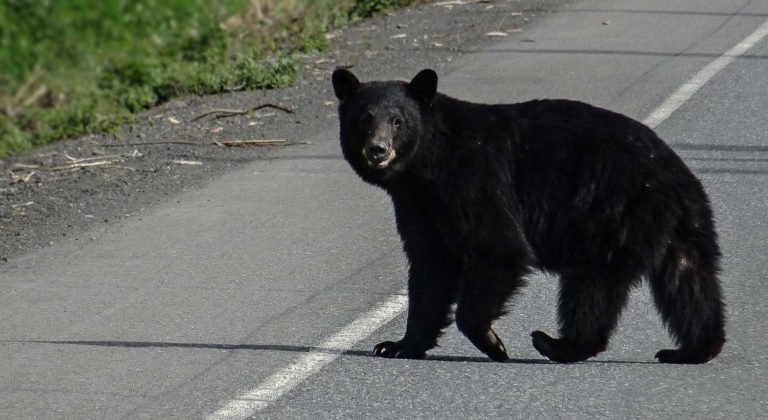 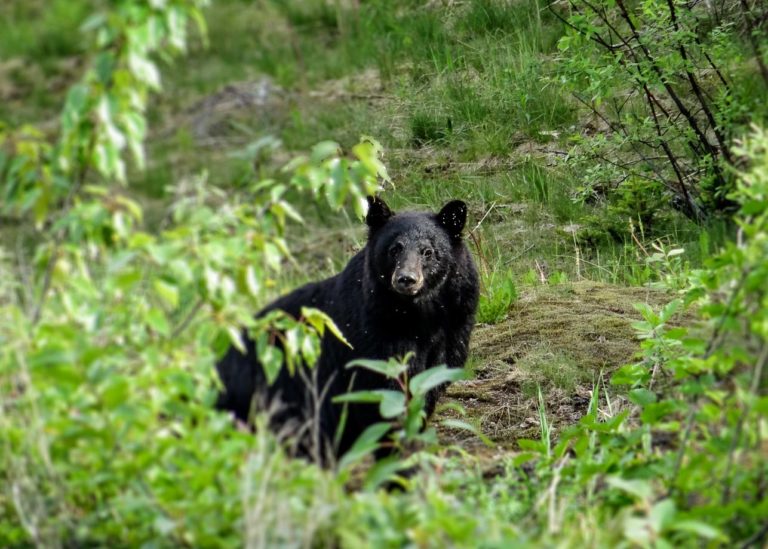 We would see seven more before the day was through.

We stopped for gas and a coffee at Bell II Lodge, where I met a beautiful lady named Debra.

Born in Zimbabwe and now calling Australia home, Debra’s eye’s and accent caught me simultaneously, throwing me a little off for a second. Her personality, however, quickly washed that away and we chatted a moment about the lodge. I asked Debra where she was from and when she said Zimbabwe I found myself prattling on about my planned African Adventure ride for 2018. Refreshingly, Debra joined in my excitement about the trip, even going so far as to say that she would try to find some route information for me, and possible places to stay.

If you have ever had one of those moments in your life where you feel utterly at ease and yet filled with electricity at the same time, then you can understand how this moment in conversation with a complete stranger was for me. 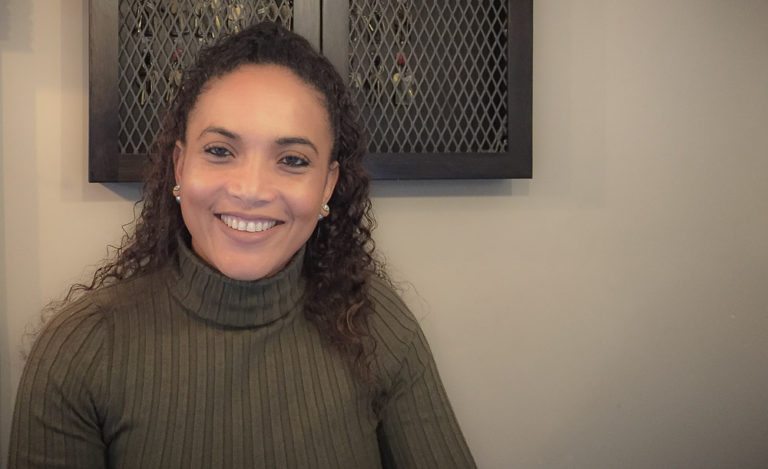 Tom and I fuelled up our bikes, had a coffee and got back on the road, a lasting impression left upon me.

About three hours later, we stopped at the hardware store/restaurant/grocery store/gas station in Dease Lake to fuel up our bikes, and our bellies.

And . . . to decide once and for all if we were going to ride Telegraph Creek road.

We had only been on the road for four hours by this point, and we had a good hour long break at the restaurant – so it was an easy decision. Hell ya! we were going to ride Telegraph Creek road.

I cannot possibly detail the road clearly enough to give your minds-eye a vivid picture, but I can tell you that this narrow, gravel mountain road is everything that it was described as being – and then some.

One hundred and twelve kilometers long from Dease Lake to the Telegraph Creek ghost town, this road is so similar to some of the high Andes Mountain’s roads that I was on in Ecuador that it was uncanny.

Fourteen-hundred foot sheer cliffs fall to the river flowing below; no guardrails whatsoever; 20% grades;  washouts, loose gravel and soft sand all making the road even more interesting – it was purely awesome! 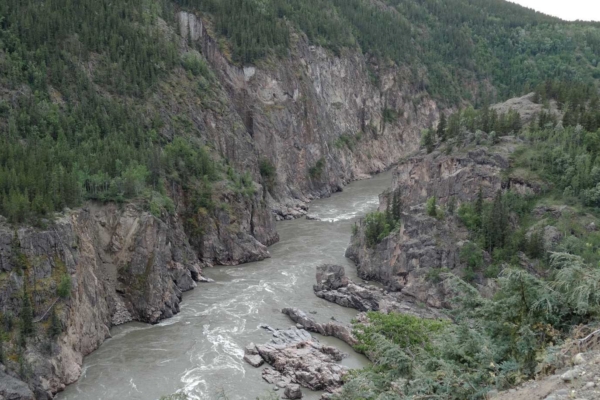 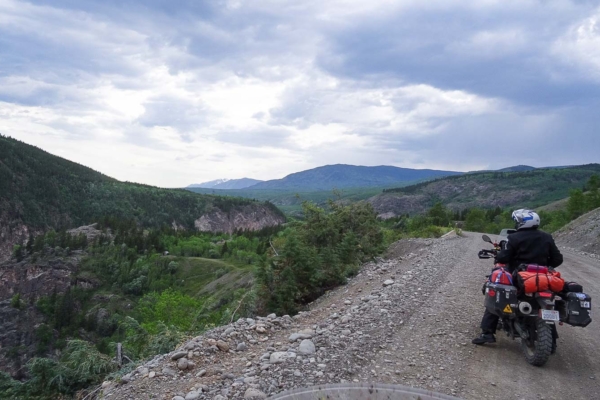 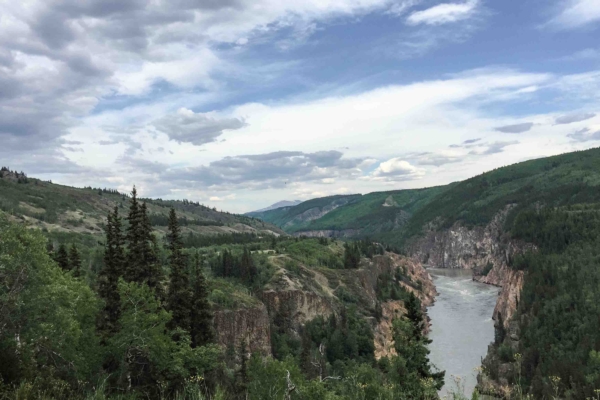 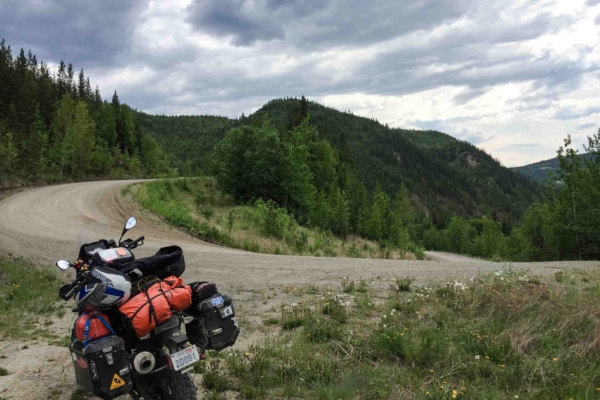 Tom and I navigated our way all the way down to the old Telegraph Creek boat ramp and parked our bikes. Riding within a metre of a cliffs edge along switchbacks and hairpins for the last 30 minutes, we were ready for a break.

We walked around the area, listening as the wind and the river carried the voices of souls passed long ago whispering to us from somewhere, out there.

The Telegraph Creek history dates back to the Yukon Gold Rush.  Gold was discovered in the Stikine River in the 1860’s. The Telegraph Creek townsite got its name in 1866 as the construction hub for two telegraph cable lines. The Collins Overland Telegraph Cable was planned to connect North America to Europe through Siberia but surveying stopped when the first trans-Atlantic cable was laid. The Dominion Telegraph line was completed in 1901 and connected the Yukon with southern Canada. However, by the 1930’s, wireless radio began to make telegraph lines redundant, and by 1936, the Dominion line was abandoned.

We found what appeared to be a museum-like collection of old tools and accoutrements of a life lived long ago, as well as what may have been a not-so-subtle warning to keep your distance . . .

That ram’s skull crept me out a lot more than it did Tom I guess.

It appears that there are still a few hearty souls forging a life in this town. As a reader (Dave) posted in the Comments section of my previous post:

People still reside in Telegraph cutting a living out of the wilderness and agriculture. Telegraph has its own Eco climate. Being only 1100ft above sea level, the Stikine Canyon has vegetation growing along the banks of the river that resembles the plant life of Northern California. 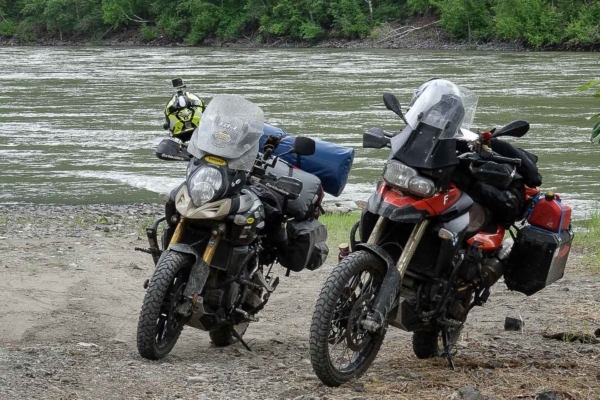 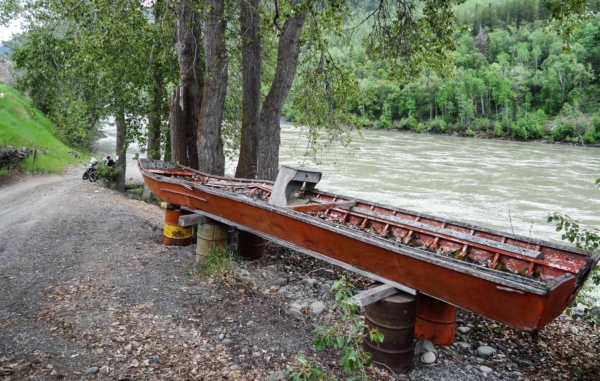 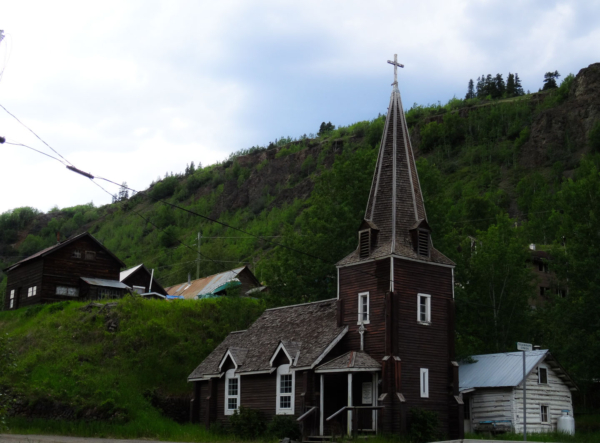 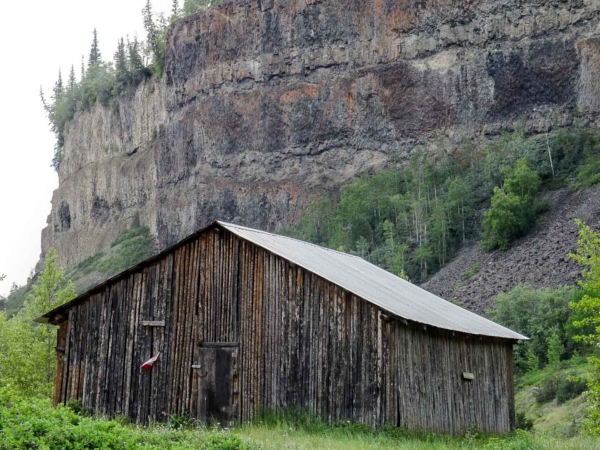 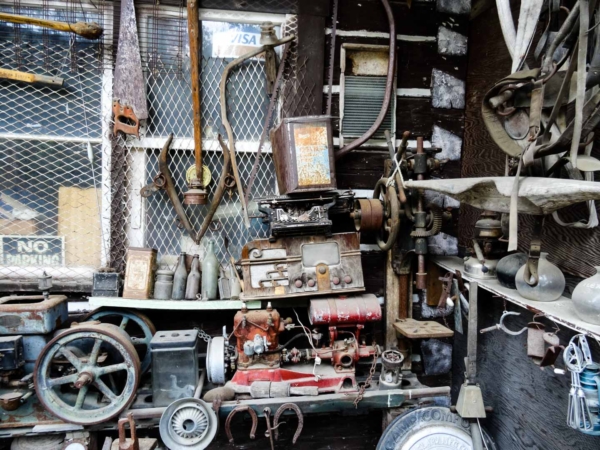 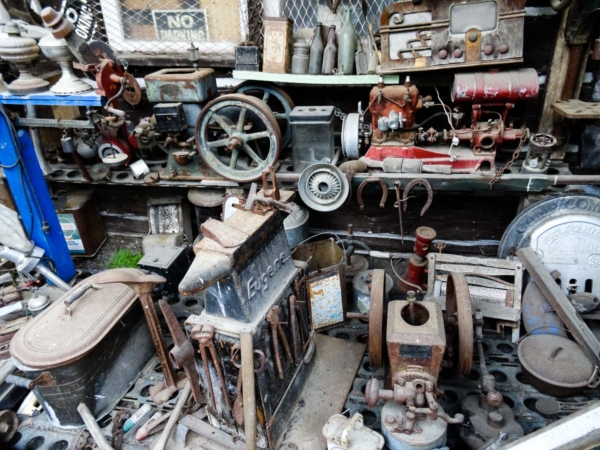 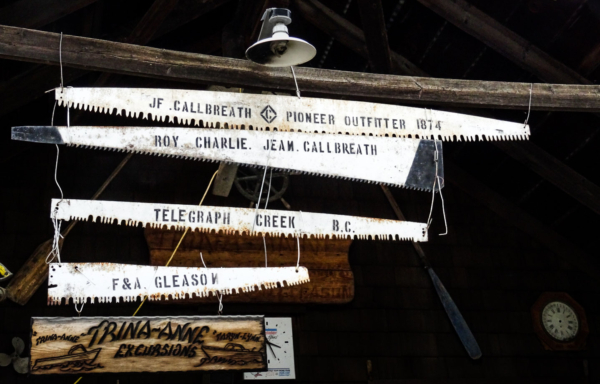 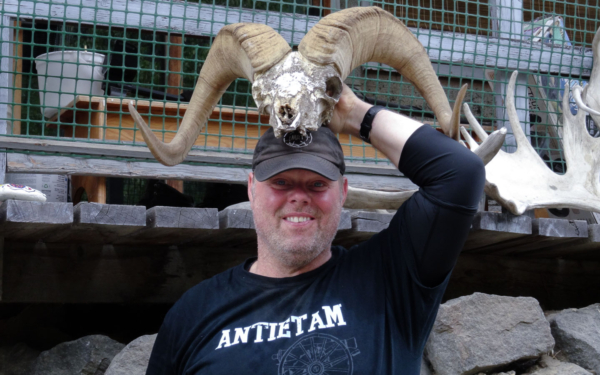 The Townsite was another of those moments that has been indelibly imprinted upon me.

After wandering around for a while we had a snack and got back on our bikes, heading back the way we had come.

As is almost always the case, the return trip was much quicker. Not because the road was any easier, or different – but because we had an idea of what to expect now, and were more comfortable in that knowledge.

Thirty minutes later I dropped Big Ethel for the first time this season.

I had managed to extend quite a lead over Tom as I was significantly more comfortable riding on gravel than he was at that time. So I thought it would be fun to get around a corner, out of sight, and pull into an off-road trail, waiting for Tom to go by and then zipping back up behind him.

Well, it wasn’t fun at all. Half-way through my u turn in a rough hunt-camp entrance I bogged the front end into a rut, stalled the bike and dropped her on her side.

I looked up just as Tom went flying past, all hope of having him help me pick Big Ethel up off the ground gone like some much dust in his wake.

I managed to heft the big girl upright and get back on, only to realize that the left side foot peg was sitting at an odd angle. Oh well, at least I could still stand, and activate the shift lever. I kicked her into gear and tore off after Tom, flying down the road at somewhat more than the posted speed limit. It took me several kilometers to catch up, and I waved Tom over to share a laugh at how quickly karma bit me in the ass.

It was then that we noticed that my footpeg mounting plate was cracked quite badly, the peg itself at risk of falling off.

Needless to say we took it easy the rest of the way back to Dease Lake, where we arrived just in time to discover the restaurant was closing.

A weathered native fella was sitting on the steps, and he greeted us with a wide smile, asking “where are you guys from?” We had a really pleasant conversation, and I found out that Patrick had been born at mile 26 of Telegraph Creek road, and that Patrick Creek had been named after him. The far away gleam in his eye as he told us his tale hinted at fond childhood memories of a time long past. 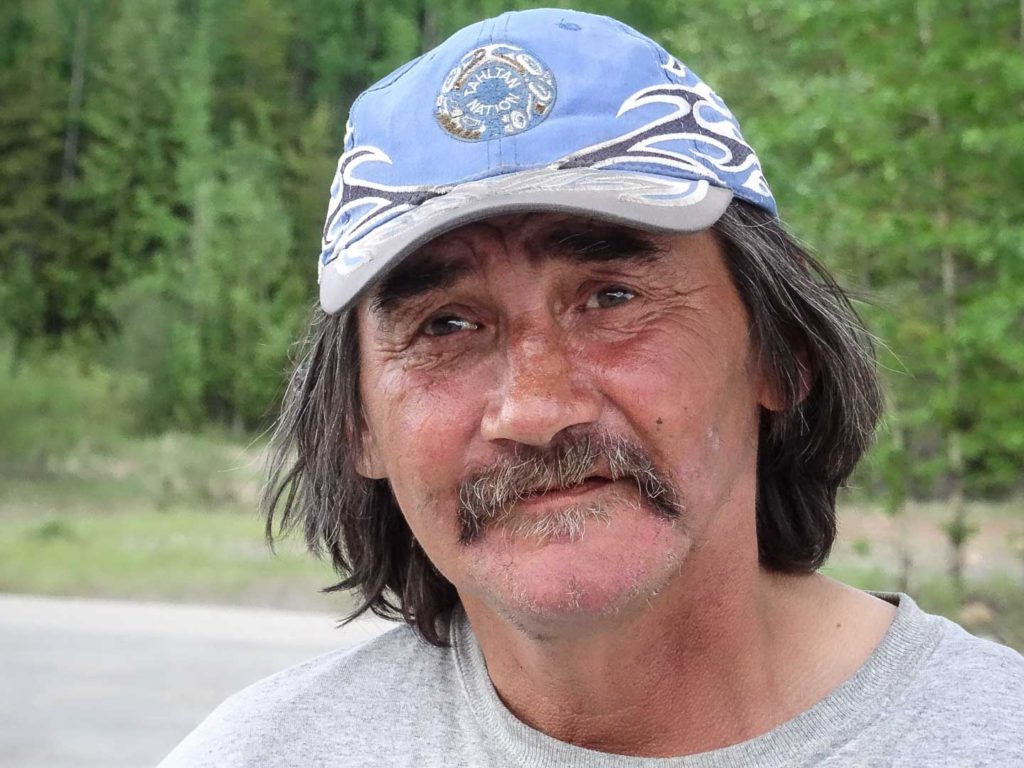 Yet another of the souls who touched me on my journey.

Tom and I headed over to the chip stand for hot dogs and fries – and a We Just Did Telegraph Creek Road celebratory ice cream!

I took a measure of JB weld to the cracked peg mounting plate on my bike, and Tom and I then headed for the Waters Edge campground to set up our tents for the night.

The day had been exceptionally hot  – it got up to 32 Celsius – so I opted to jump into Dease Lake to wash off and also to launder my base layers.

In mere seconds I was blue.

So a shivering bath in a northern BC lake sent me right to my sleeping bag and – you guessed it – another great night’s sleep. 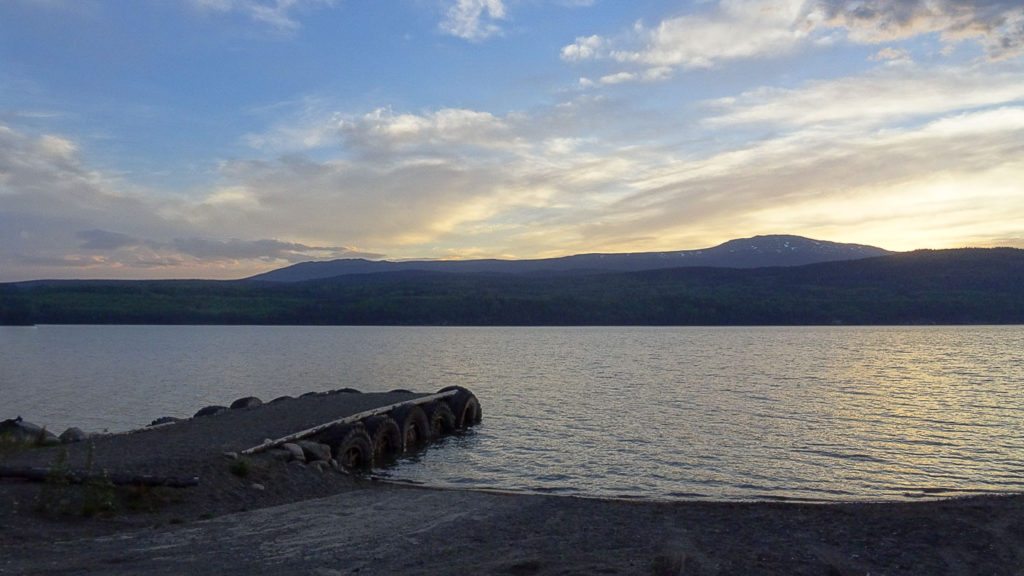 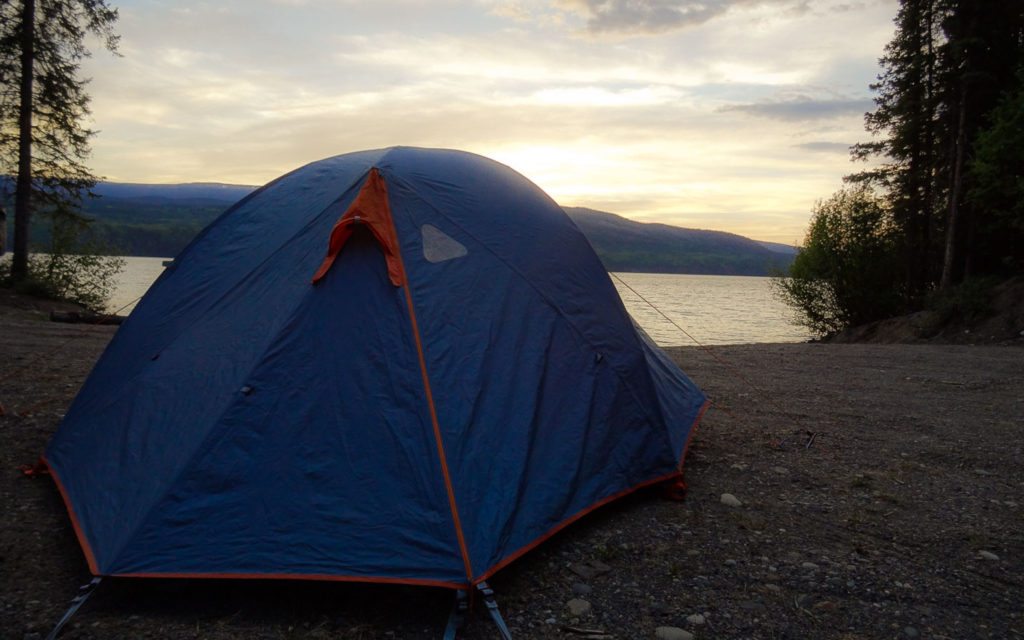 Stick around – in the next post we head into the Yukon, and things get twisted.

I recognize Tom from your pictures after meeting him in Dawson City. We shared a room at the Bunkhouse for one night before I departed for the Dempster the following morning. Small world. I also did this Telegraph Creek ride, was interesting for sure. I will look for more of your blog posts. Thanks.

Thank you for dropping by Doug – I remember seeing you at the Bunkhouse.
I hope that your adventures were excellent! How was the Dempster?
I only went as far as Tombstone.

On the road with no one else there – amazing to be completely surrounded by such magnificent and wild nature. Easy to feel like an original ‘Canadian’ explorer, but before Canada existed. Looking at all the layers of rock, behind the old wooden building. How far back they must go and how much they must have ‘seen’ in their time. Oh, if only they could tell their stories!

Sandy I swear, if you listen closely enough, you can hear the whispers . . .

Thanks Joe for writing all this and writing so well. I feel the electric excitement of your adventure. Thanks for taking us along and please keep it up. John

Hey thanks John – I really do appreciate each and every comment, and I am happy that you are enjoying the ride brother!

Hey Joe
It was a real pleasure meeting and riding with you!,
All these beautiful places was that much more memorable when shared with a Great guy!
Your friend Tom ?

Tom the feeling is mutual sir. I was telling my web-guy how great it was to share such incredible moments in my life with another person.
We both have memories that will last a lifetime!
Let’s talk about Bella Coola in 2018 ?