After a great night’s sleep we gathered in the cozy dining room downstairs and enjoyed a wonderful breakfast. 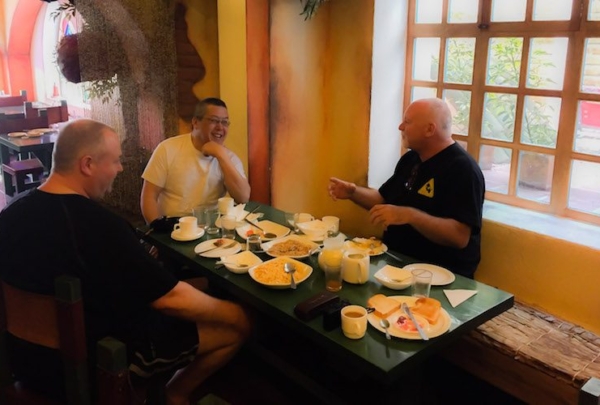 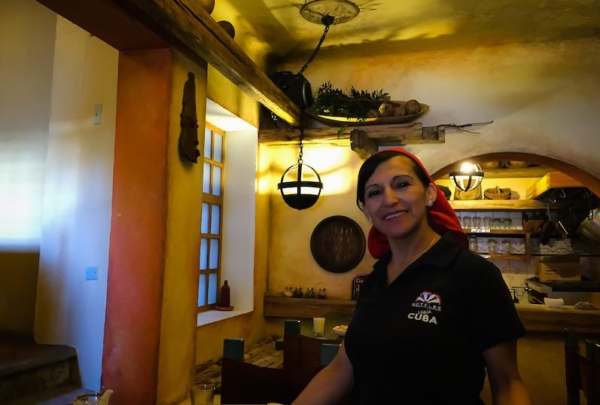 I am not going to get into a long-winded diatribe about what we have done to our food in North America – or what we accept as normal – but I will tell you that everything tasted better at breakfast.

The over-easy eggs that I had were unbelievably fluffy and flavorful, and the fresh fruit was almost like eating candy – so incredibly sweet and bursting with flavors that I truly think I could easily replace my go-to sweet tooth satisfiers with pineapple, banana and melon of various shapes and colours. The freshly prepared fruit juice – naranjilla and passion fruit – was also simply delicious. Surprisingly, the only part of breakfast that did not leave me thoroughly impressed was the coffee. It was good – just not up to par with the rest of the meal.

It was at breakfast that we also met out our 3 other compadres: Roger, Flash and the Indian Indiana Jones.

Introductions were made all around, we discussed initial experiences and reactions to the hotel, the food and to Ecuador in general.

So far it was thumbs-up all around!

After breakfast we decided to go out and do the tourist thing. We took cabs to the Basilica del Voto Nacional, the largest Basillica of it’s kind in the Americas and easily the most beautiful building that I have been inside if since my time spent in Europe so many years ago. 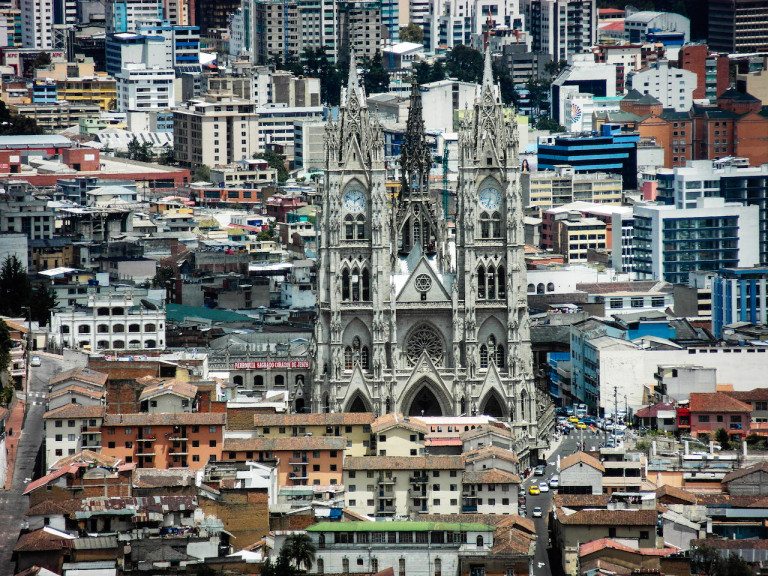 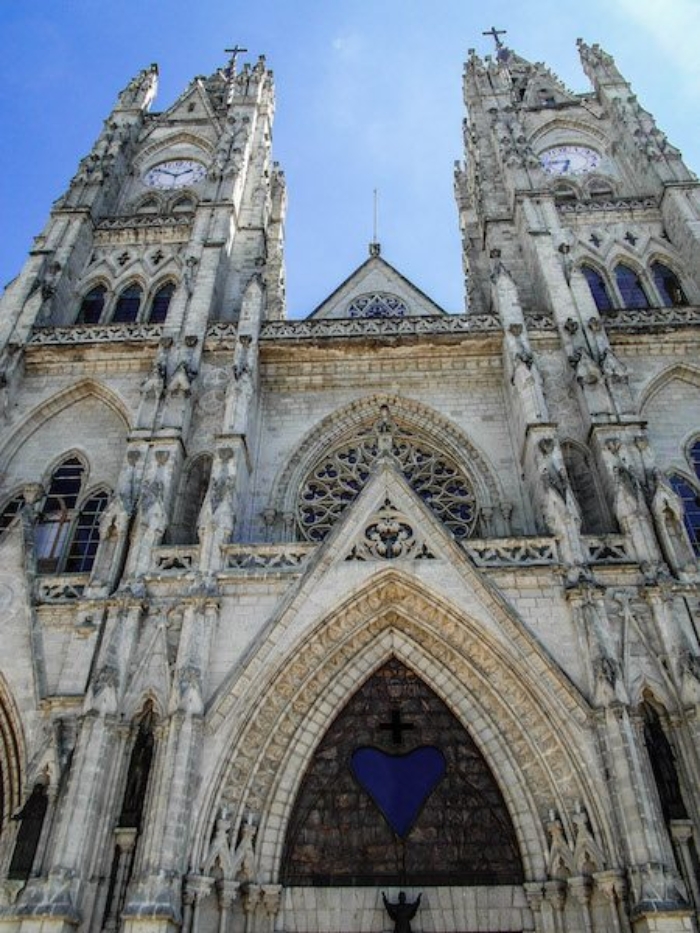 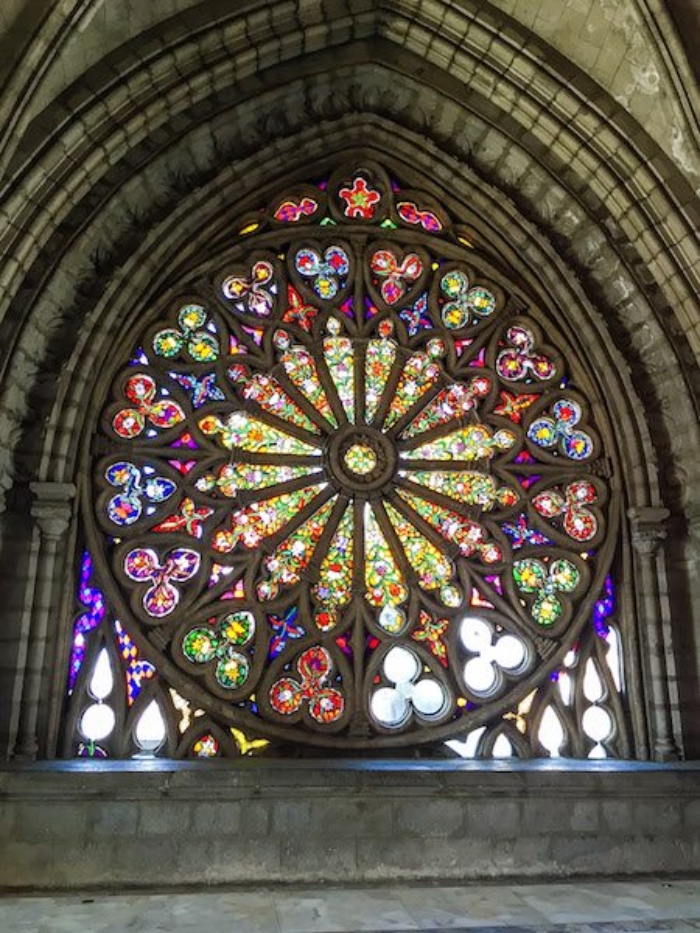 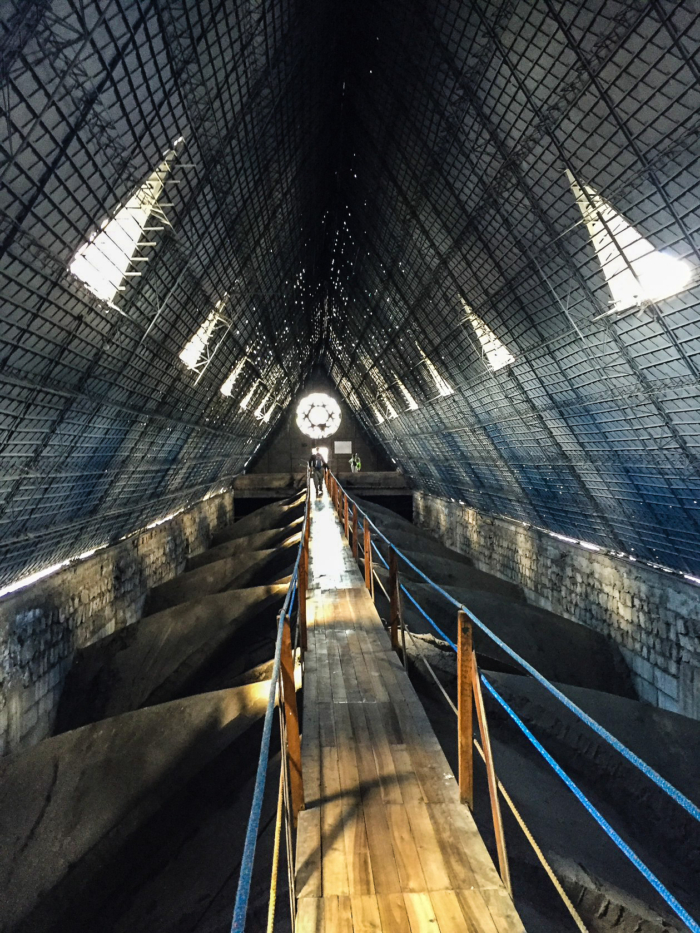 We even climbed to the top the spires and were granted incredible birds-eye views of the city of Quito and the surrounding areas. The exertion required to do so left all of us very aware that we were not in Kansas anymore. At 2,850 meters above sea level, Quito is actually the highest capital city in the world, and our shortness of breathe was a constant reminder of the effect the altitude was having on us.

After a break that included some coconut ice cream and some photo’s with the locals, we decided to get back into a taxi and head to the other big attraction in the area. 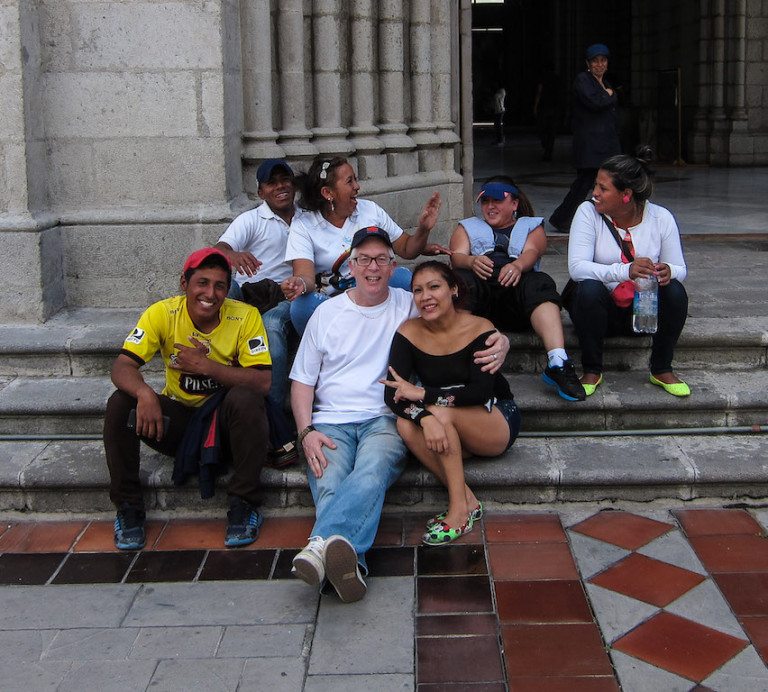 The Woman of The Apocalypse, a 45 meter tall replica of the Virgin of Quito made of 7,000 pieces of aluminum. This statue stands atop a hill at 3,016 meters above sea level, and we once again climbed the stairs to the rotunda and got sme more great shots of the landscape, as well as some reverse point-of-view shots of the Basillica that we had just recently visited. 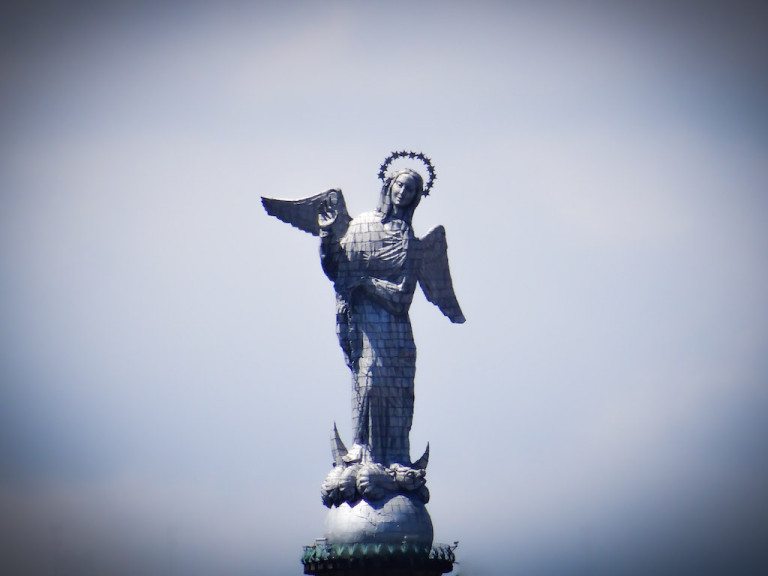 David sampled some of the local street food, and we all did a little open-air market shopping. This was my first indication of just how marked-up imported items are in Canada. There were countless alpaca and llama hats, shawls and scarves for sale – the hats averaging $3, the shawls $10 and the scarves $7. These same items can be purchased at my local mall in Ottawa for $20-$30, $90-$120 and $65 each, respectively. I purchased myself a Panama hat for $18 – easily $100 or more here in Ottawa. 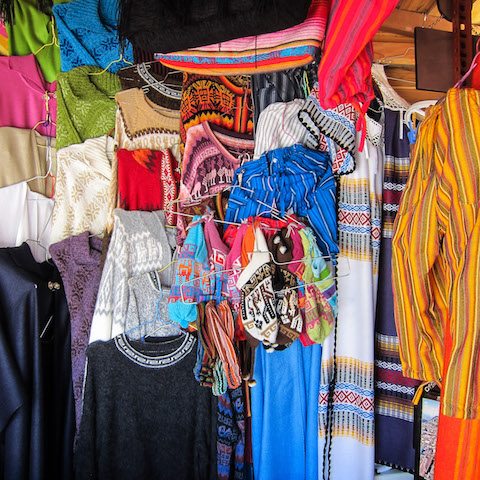 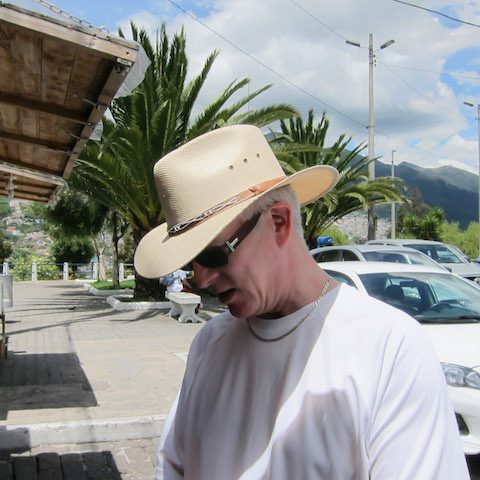 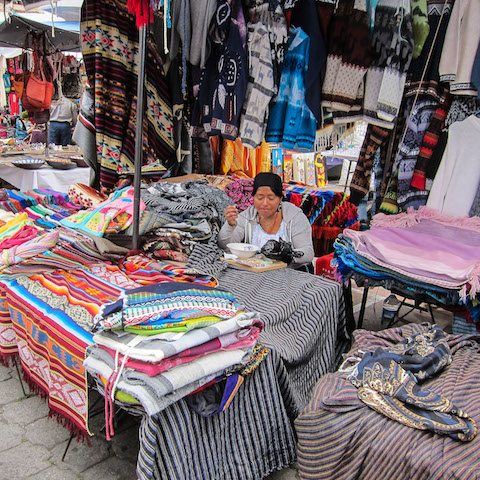 After having our fill of the sightseeing tourist thing for the day we headed back to the hotel, relaxing there for an hour or so before walking to Ecuador Freedom Bike Rental to get all of the arrangements for the next day’s departure squared away.

Interestingly enough, 4 of our 6 rented bikes were not even back yet, but were still out on a tour and expected back that evening. I had used a few bike rentals in the past and this sort of thing never happened to me! It’s always helpful to check the bike rentals reviews before you visit them, or just book with a reputable company like Pelican Cruiser (click here to continue.) I was worried we were going to miss our tour if our bikes were back in time.

Court Rand, who along with his business partner Sylvain owns and operates Ecuador Freedom Bike Rentals, assured us that there was no cause for concern and that our bikes would be all ready for us come morning.

Court is a very interesting fellow. Somewhat gruff, with a gravelly voice and a pretty thick physique, he has little time for small talk and patter – or so it seemed when we met him to discuss our ride and all that it involves. The fact that he is originally from Dorchester, Boston kind of adds some understanding to his demeanor. I could easily picture him behind the bar of just about any Mark Wahlberg film: wiping out a whisky glass with a dirty bar rag, mouth shut tight in a thin line, with eyes squinted and watching the door.

It turns out that he simply takes the serious stuff pretty seriously, and does not make light of some of the potential inherent dangers that go along with embarking on a 6 day self-guided motorcycle adventure through the Andes Mountains. Court pointed out to us something we had not realized when we planned the trip: we had chosen the most difficult route they offer – and to do it without a guide. 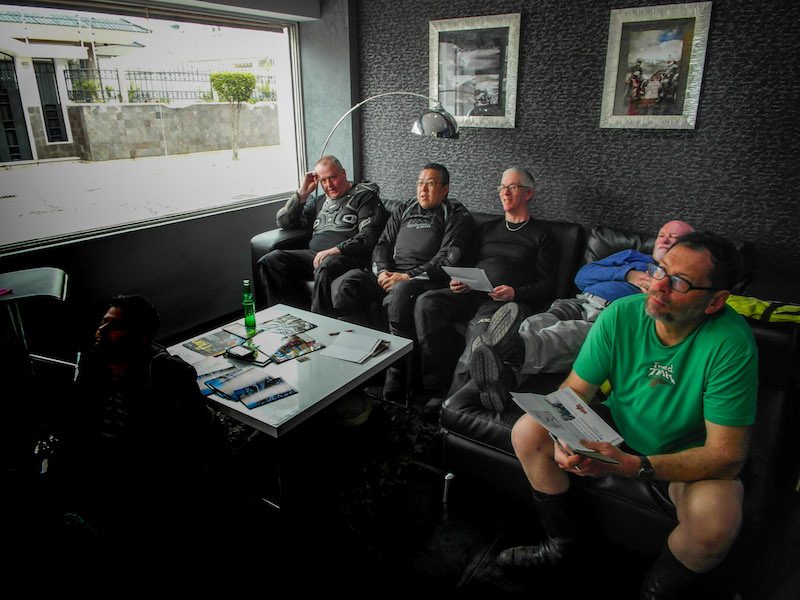 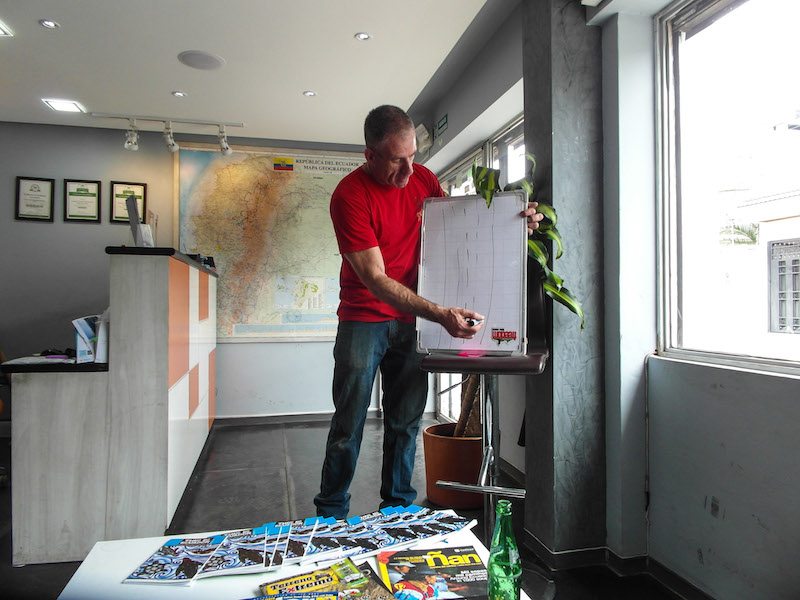 It took almost 90 minutes to go through the route and ride sheets, safety plans and details of our ride before we headed back to the hotel for a little siesta before supper. 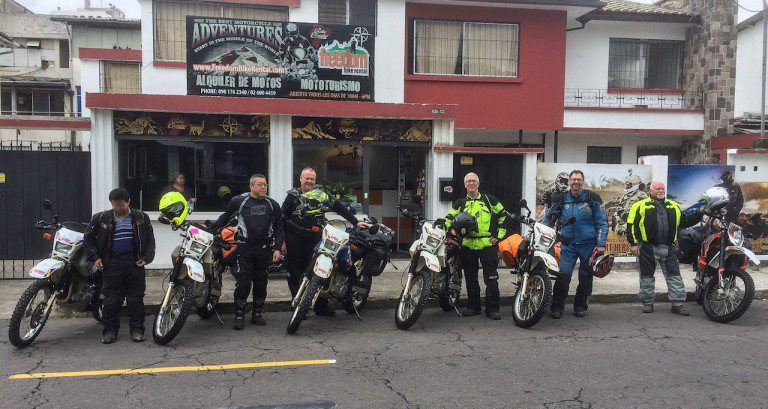 We ate at a fair-sized restaurant right across the street from the hotel, enjoying coffee and dessert at another little shop down the block, and I was continually impressed with the offerings.

By 7:00pm I was back in the hotel room, stuffing all of my gear into the Giant Loop Saddlebag provided by Ecuador Freedom Bike Rentals, and by 8:00pm I was once again in bed, exhausted.

Tomorrow, the true adventure would begin.

UP NEXT: Riding the Guayllabamba River Canyon