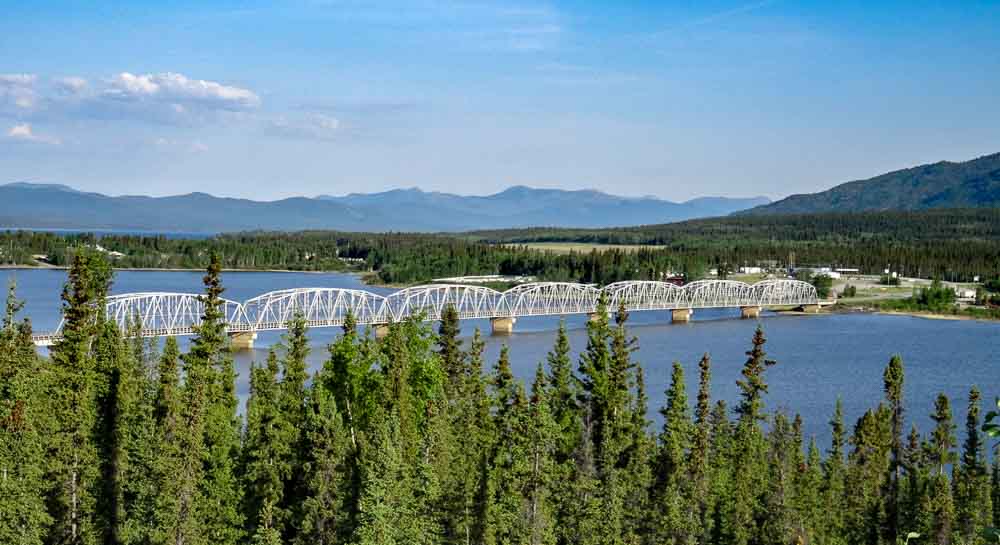 Tom and I went through our morning tear-down and pack up routine and rode 75 kilometers into Teslin for fuel and breakfast. Once again, I had to add octane-boost to my tank as the station only had 87 octane and Big Ethel loves Premium. There is a noticeable drop in mileage whenever I use less than 91 octane fuel.

During breakfast, we had the chance to chat with a few other riders to compare notes on our respective adventures. It seems most of the riders we met were heading to Alaska.

After a leisurely breakfast we got back on the road and headed to Whitehorse. Two hours later, we pulled into a McDonalds parking lot in Whitehorse to do some planning and have a coffee.

While enjoying the coffee another rider walked up to our table and struck up a conversation, asking about our bikes and our plans. It turns out that he was a retired RCMP officer who had been posted all across the Yukon and northern BC over the past 30 years. Familiar with all of the well known adventure roads in the area, he strongly recommended that we ride the South Canol road and a portion of the North leg as well.

I had researched the North and South Canol roads while preparing for this trip and fully intended to ride at least the southern portion.

Our friendly ex-LEO then strongly emphasized that we needed to get some bear spray – and keep it close at hand and ready at ALL times.

We thanked our impromptu-guide and rode around the block to check-in at Lister Motorsports – the shop that would be receiving my Priority Post package from MSW in Ottawa. I introduced myself to Micah at Listers and we eventually got around to discussing our riding plans.

When we mentioned North and South Canol roads, we spent the next 10 minutes listening to harrowing and horrific tales of recent grizzly attacks. Hmmmmm . . .

Later, Tom and I discussed it further and we came to a compromise: we would ride South Canol road, but we would not rough camp along the way. This would make it a long day, but that would better than becoming an MRE for an 800 pound omnivore – speaking of MREs briefly as well, we’d packed quite a lot as they’re good for what they do, but if you have the option to stop somewhere for food, you may as well.

We picked up an extra can of bear spray and headed out to the Hi Country RV Park to meet up with Lorie.

Tom had yet to meet theshnizzle, and within 10 minutes it was like we had all been riding together for weeks.

That’s one of the really interesting aspects of adventure motorcycle riding – or rather, riding adventure-style motorcycles. There are never any uncomfortable silences or awkward moments – you simply walk up to another rider, put out your hand and introduce yourself. And just like that, you are sharing tales of roads traveled, incredible sights seen, roads that you really gotta ride, oh – and the times that you have dropped your bike ?

As a matter of fact, sometimes that information precedes you, as was the case when I sauntered over to introduce myself to the BMW rider who was camped just across the way.

Moe was also on his way to D2D, and as soon as I mentioned that I was  Joe, and that I was waiting on a part to arrive in Whitehorse, Moe began to chuckle.

“Oh, you’re the guy that broke his footpeg off at the Yukon sign. I was talking to a couple of Harley riders that met you in Watson Lake.”

And that is how quickly word travels in the motorcycle community!

Moe and I chatted a little further, wished each other safe riding and I went back over to our campsite, letting Tom and Lorie know that I was heading into town to go to the library and access the internet – yes, to work on some writing.

I also had to complete an impromptu repair to my Macna motorcycle jacket (see my preview/review post from the 2015 Kimpex Show): one of the Velcro cuff fasteners was coming apart at the seams, literally.

I asked a local shopkeeper where I might have my jacket repaired and was directed to Bolt & Button, where Lisa took my jacket from me, suggested I go kill 15 minutes, and 12 minutes later came out to the sidewalk to hand me my newly repaired garment.

I’ll say it again: it is the people that you meet along the way that truly make the adventure.

Thank you Lisa, for offering professional service on the spur of the moment to a fellow in need, and for doing so out of the sprit of giving.

It is truly appreciated.

A couple of hours later, dinner eaten, it was time to call it a night.

After all, Tom and I had plans in the morning.

If you are ever traveling through Whitehorse, Hi Country RV park is the place to stay. Laundry facilities, well appointed, clean and hot showers, a store, firewood; if you need it, they likely have it. And the tent sites are quite large – we fit 3 bikes and 3 tents on the same site. 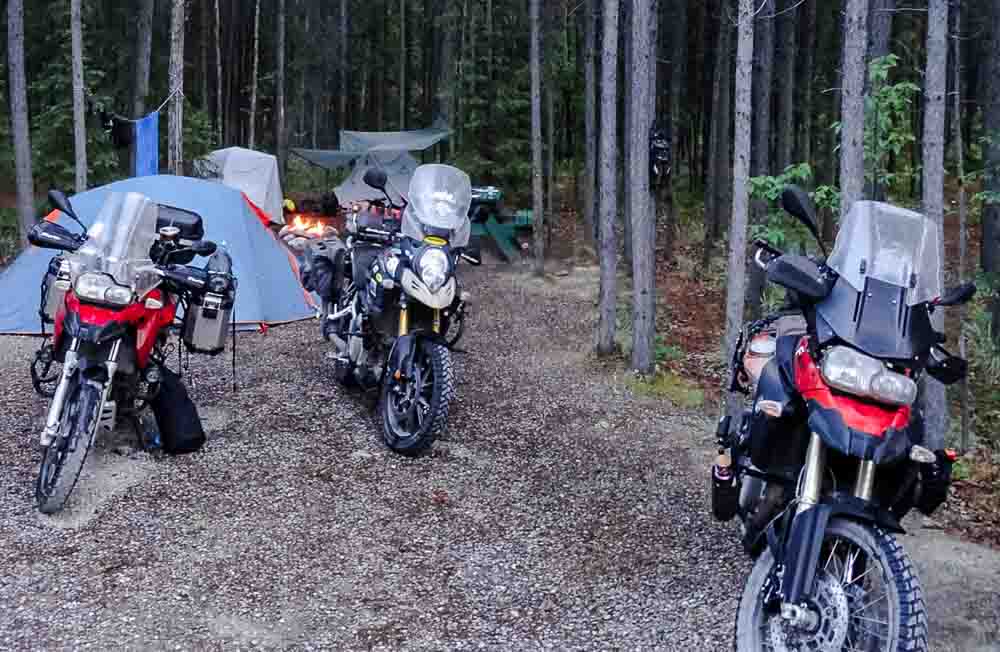 My leg, on the other hand, was not doing exceptionally well. The ankle was really swollen, and walking was quite painful.

I was not sorry to have an easy, short day.

Next up: Riding South Canol Road, and learning to pay attention to the Weather.