Tom and I awoke excited about the adventure that lay ahead of us: we were geared up and gone before 0800am.

Lorie elected to sit this one out as she doesn’t really like gravel, and South Canol Road was 223 kilometres of the stuff.

We rode back to Johnson’s Crossing where I fueled up and we had coffee and blueberry scones (the biggest scones I have ever seen), and then crossed the bridge and hung a left on South Canol Road.

Less than fifty metres in there is a sign warning that this is a narrow, winding mountain road, and there are several old trucks marking the spot. Remnants of a multi-million dollar pipeline project that was the sole reason for this road being built in the early 1940’s. 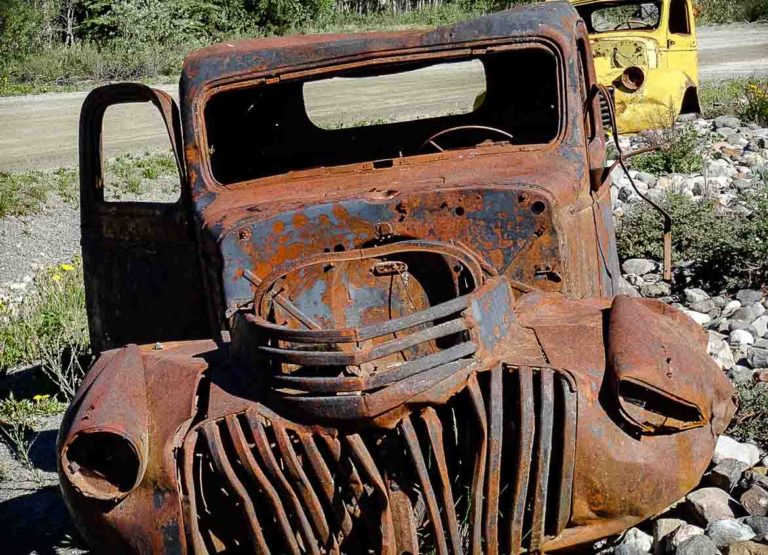 The road is not maintained during the winter months, and as a matter of fact the 511 Yukon road conditions website showed both North and South Canol roads as being closed, however Tom and I figured we would come down and take a look for ourselves.

As fate would have it, although the sign said ‘Road Closed’, the gate was standing wide open, almost invitingly, you might say. . .

We found out later that road crews were in the process of clearing winter washouts and completing bridge repairs. Starting at the south end, these crews were now well into North Canol Road.

We should have checked the weather forecast.

There are several good ride reports and webpages about Canol Road – both North and South – and all will tell you the same thing: this road is not for the faint of heart; this road is very remote; this road should not be undertaken in adverse weather conditions.

Well, we are not faint of heart. Remote is often another word for beautiful. And heck, the sun is shining and it’s almost a balmy 12 degrees.

The first 30 or 40 kilometres of the ride was really not difficult at all. Long sweepers and shallow grade hills, we were getting into the groove quite quickly. 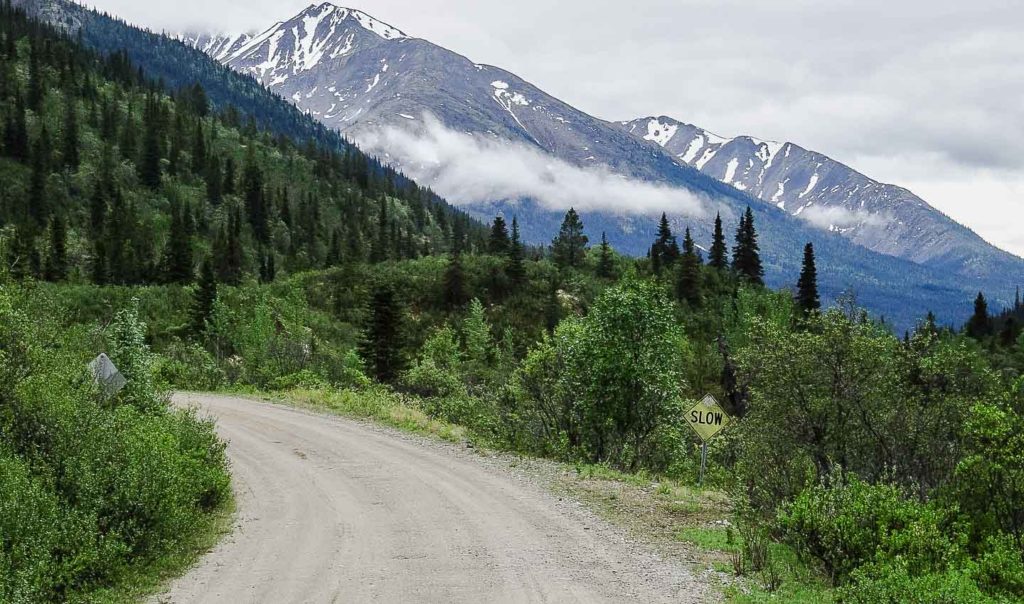 The gravel surface was often sandy and loose, the front end of the bike wandering side to side, tire seeking purchase, but I learned on the Trans-Taiga that these are the conditions where fast and loose is your best bet: get up some speed so that your front end almost floats on the surface, and keep your upper body, arms and especially your hands really loose on the bike, allowing the bars to twitch and move as the bike wanders slightly to and fro’.

Tom was quickly learning and becoming a much more comfortable gravel-road rider. 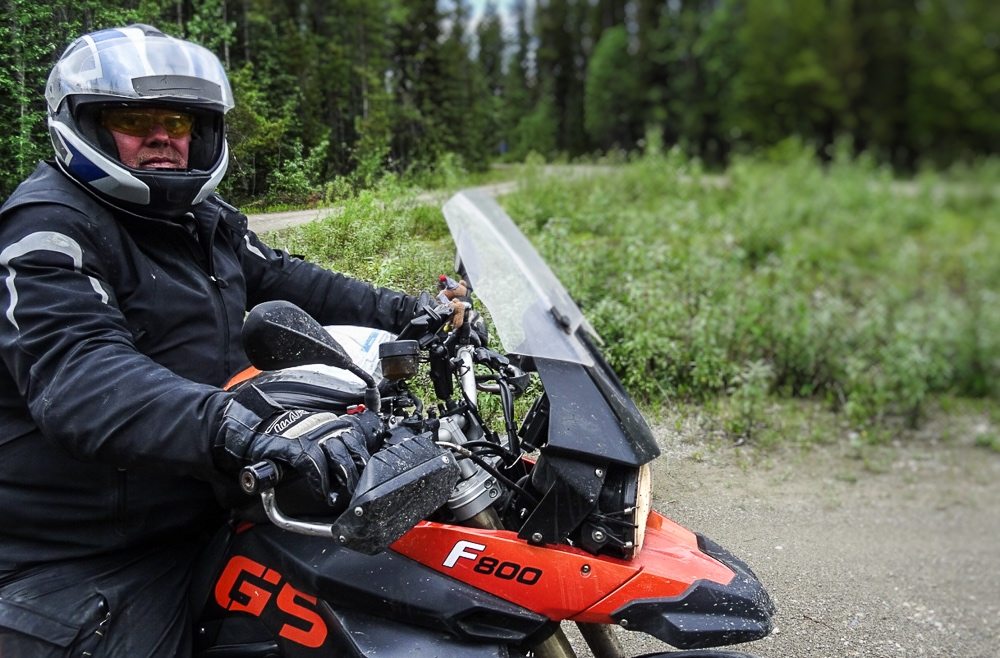 Before long we were clipping along at 70 – 80 kph, once again struck be the sheer beauty of the environment that we found ourselves immersed in.

And then things changed a little. The pot holes – of which there were many – all had standing water in them and the road surface itself was damp, but not quite wet.

As a matter of fact, the sun had hidden itself behind some grey clouds, and the air was beginning to cool . . .

Ah, the weather in the mountains was often  different than down below, but it was no cause for concern. After all there were still plenty of large patches of clear blue sky.

We were now about 80 kilometers into the 223 kilometer length of South Canol road, and the terrain was slowly but continually getting worse. What was earlier damp-but-not-quite-wet sand and gravel was now definitely wet, and becoming quite slick under our tires. It was kind of like riding on a really hilly version of the Trans-Lab when it’s wet, or that section near Relais Gabriel.

I slowed the pace, standing on my pegs but frequently checking my mirrors for Tom’s headlight. And he was always there, keeping the pace right along with me.

We finally stopped way up on the side of a mountain, the road overlooking the valley below and snapped off a couple of pictures, commenting on the ride – and the Unimog that had passed us going in the opposite direction – man, those are one mean looking machine!

I commented on the sky, and the uniform steel grey that had swallowed every bit of blue that had been keeping my spirits buoyed. 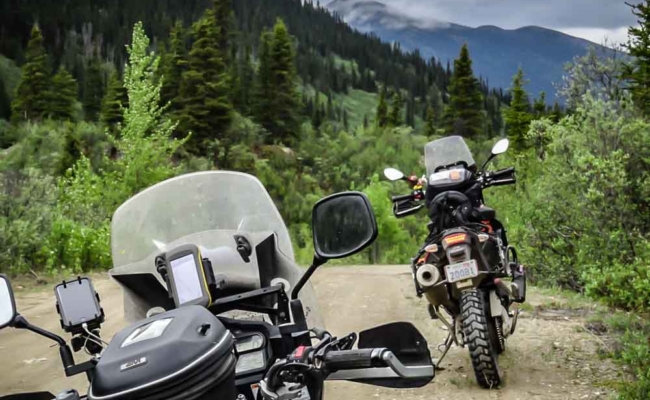 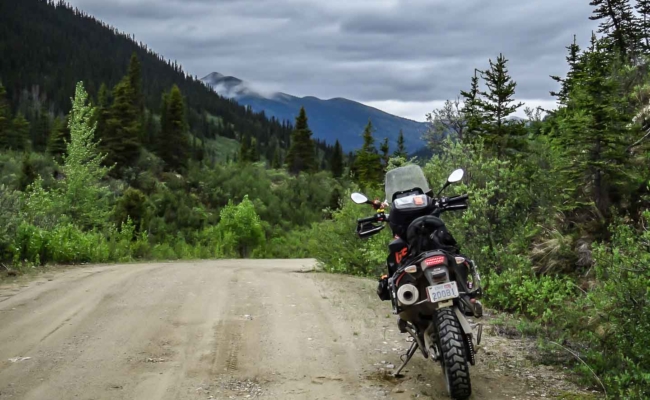 I so wanted to agree with him. But my hips and my ankles were predicting something completely different. Ya, if there is a benefit to be found in suffering from arthritis, it is the ability to predict rain with an accuracy that few meteorologists ever employ.

I pulled my raincoat from my saddlebag and put it on over my riding jacket, letting my actions speak for me.

Not 15 minutes later, the first drops began to fall.

We were now about 130 kilometers in.

With just less than 100 kilometers to go before we reached the end of South Canol road.

I started hoping and praying that the rain would not strengthen to much beyond a sprinkle. My biggest fear was not that the road might become muddy and slippery – that had already begun to happen.

No, my biggest fear was a slide. Tons of rock and earth and mud sliding down the side of the mountain, obliterating the road that we had to travel in order to get to Ross river at the end of the South Canol.

The only option then would be to turn around and head back the way we had come, hoping to get out that way.

Not something that I was at all looking forward to.

Before long the rain intensified into a steady downpour. The road was becoming as slick as snail-snot, both of our bikes sliding one way and then the other as our tires sought purchase in the ever-worsening mud.

And sure enough, Tom and I both began to see evidence of potential disaster looming. Small clumps of sodden earth, and stones the size of baseballs, were soon scattered across the road, having fallen from the high side, loosened by the rain, and littering the road in front of us.

Obviously, with me here tapping this post out you know that in the end, all turned out okay for Tom and I.

I have to say though – it was anything but fun.

The last 80 or so kilometers of south Canol road, before getting to Ross River, are the steepest, and the narrowest, and the rockiest of the entire 223 kilometers.

We were doing no more than 40 kilometers an hour – and often less than 20 – for long distances, both of us I am sure wondering when the hell this particular hell was going to end.

And then we came to the end of South Canol road. I threw my arms up in the air in a moment of private victory, mouthing a silent f#@k you to Mother Nature, and thinking with more than a little satisfaction that Tom and I had likely just joined a pretty small, some might say elite group of adventure riders.

The ones who have ridden South Canol road in the rain.

The downside following that little moment of victory?

We still had 5 hours of riding to ahead of us to get back to Whitehorse. And oh, joy, the Robert Campbell highway is really shitty gravel . . . no, sorry, let me correct that: really shitty WET gravel – from Ross River all the way to the Faro turn off.

Sure, that’s only 75 kilometres, but enough already!

We got gas at the 24 hour cardlock in Ross River, and Glen, the attendant on duty let us warm up in his office trailer for a few minutes, before we got back out onto more wet, slimy gravel.

Actually it wasn’t that bad. I picked up the pace, skimming over the surface at 90 to 110kph, slowing every once in a while if I lost sight of Tom’s headlight. The worst part was the cold. It had dropped to 6°C, and we had been riding in the pouring rain for 2½ hours or more by this point. I had lost all feeling in my hands, and was generally chilled right through – though thankfully I was completely dry with the exception of my hands.

Tom and I rode numbly to Faro, where we managed to find a small cafeteria that was open in the town’s only hotel – and possibly only business venture of any kind.

We had soup and a sandwich and warmed up our chilled bodies for an hour or so before getting back on the bikes and pushing on to Whitehorse.

When we got to Carmacks, 182 kilometres later, we stopped again for fuel and coffee, briefly toying with the idea of just getting a room for the night, but nah, there was only one more push left to go: another 185 kilometres.

I have to say, that was probably the longest 185 kilometres that I have ever ridden.

My hands were so cold that even with my heated grips on high, I could not feel anything.

Not even the burns that blistered into my palms because the grips were so hot.

I showed my palm to Tom when we pulled into our campsite, both of us so stiff that we struggled to get off of our bikes.

Then, to cap things off, I placed my new Icon riding gloves that I purchased from 613 Motorsports before I left Ottawa on the warm stones surrounding the fire pit to dry out.

I neglected to pay attention to the fact that Tom was stoking the fire.

If only I had paid attention to the weather . . .

Up Next: Hot Springs, Awesome Pizza And A Rustic Hotel

Not only do you need to pay attention tot he weather…that snail snot is slick stuff! ?

Hahaha, it sure is! It makes for many ‘holy crap’ moments, lol