Lorie was up, packed and on the road before I even rolled over in my sleeping bag – it must have been about 06:30 when she pulled out, eager to get to Chicken, Alaska and then Dawson City.

I, on the other hand, woke up long enough to book a motel room in Whitehorse for the night from an app on my iPhone, than rolled back over and fell asleep until well after 0900

Yes, the long, cold ride yesterday had definitely tired me out. And it was sprinkling on my tent as I woke up, so I was really looking forward to getting that motel room.

Tom and I headed to the Airport Chalet restaurant for breakfast on a recommendation from Moe – or Mike, I’m not sure, but it was definitely one of the other D2D riders that we had met at the campground. Good coffee, and delicious scrambled eggs and pancakes definitely put a warm smile on my face, energizing me right through the tearing down and packing up of our campsite before heading to the Stratford Motel to book in.

Tom and I had already agreed on the days goals: tighten and lubricate our motorcycle chains, and go to Takhini Hot Springs.

Alternating between the 2 is a luxurious experience, and we easily killed almost 3 hours in the pools, chatting with other travelers and getting recommendations on roads to ride as well as real estate recommendations in Prince George.

I am really starting to consider a viable location in BC as a hub for adventure motorcycle tours . . . But that is a subject for a later post.

And then it was back to the motel for a great night’s sleep.

Ah, another slow, easy morning. We took our time, in no rush for anything.

It was 6 degrees and raining, after all.

Our goal for the day was to head off to Dawson City – about a 7 hour ride, or closer to 8.5 hours with fuel and food stops.

A return visit to the Airport Chalet restaurant for breakfast gave us the caffeine-induced energy to hit the road towards Dawson City. The rain continued to fall, and it had only warmed up to about 8 degrees Celsius, but thankfully, after another brief coffee infusion at the gas station in Carmacks about 2 hours later, the sun began to shine and the weather became truly spectacular.

Tom and I set into an easy pace of 5 or 10 over the posted limit, and in what really felt like no time at all we were at Stewart Crossing – the junction where the Klondike Highway crosses the Stewart River and heads off to the east into silver-mine filled mountains along the Silver Trail, or further west to Dawson City.

There is a traveler’s information kiosk at the junction, and truthfully I do not often stop at these as they generally aren’t staffed and I guess I just never took the time to see what I might learn. However, I pulled into this one as there was a picnic table, and a car was parked in the gravel parking area.

You can bet that I paid careful attention to the gravel as I pulled my bike to a stop and got off.

And it was here that Tom and I met one of – if not the most interesting character thus far on the D2D Adventure. 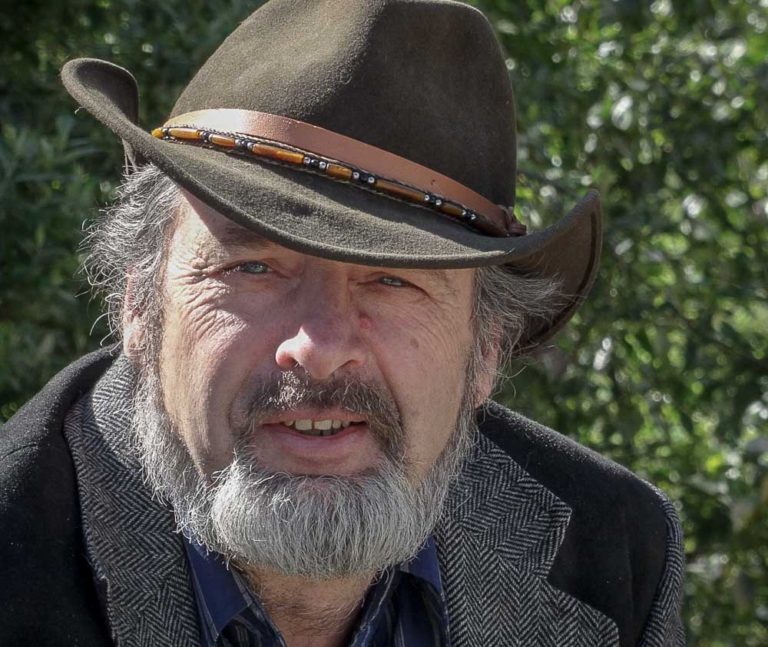 Dave is a throwback to the late-60’s / early-70’s. Long, wavy hair, a crushed-leather cowboy hat, bolo tie and a relaxed manner and way of speaking that put me in mind of someone who can hold a room in his palm, hanging on his every word.

Dave is a bit of a Klondike man, but rather than hunting gold or silver, Dave’s passion is fossils and his little kiosk has an incredible collection that he has gathered during his forays into the wilds of the Yukon. Versed in the story behind each one, Dave’s eyes took on a certain gleam as he explained to Tom what each fossil represented, and from approximately what time-period it’s organism originated.

At one point Dave mentioned that it was not often that anyone even gave his collection a second glance. It was very easy to see how pleased he was that Tom had taken an interest.

I sat outside in the ever-warming sunshine, looking at one of the brochures from the rack inside the kiosk when I noted that we were near Keno, one of the side-trip destinations that I had planned on making when I first started putting this adventure together back in November of 2016.

I asked Dave, when he was finished discussing Precambrian and Cambrian critters with Tom, how far Keno was, and if it was worth the trip.

Dave looked at me with that same glint in his eye and said simply “you can’t come to Stewart Crossing and NOT go to Keno.”

Dave then went on to tell Tom and I all about the local lore and legend of Keno City, recommending that we book a room at the Keno Hotel “if you like rustic.”

Dave also recommended that we stop in Mayo, a town along the Silver Trail on the way to Keno, and look for Mike’s Pizza.

“Best pizza in the Yukon, or so I’ve heard.” Dave stated.

Interestingly enough, that was the second time that I had heard someone mention Mike’s Pizza up Keno-way.

Well, when it comes that strongly recommended . . .

Tom chatted a little longer with Dave, and then we headed off up the mountain towards Mayo.

Dawson City would just have to wait.

The road was hard packed gravel, nice and wide and we were able to keep a good steady pace. We did see one black bear come up off the shoulder, and Tom actually tried to get a little too close to it for my liking, but the bear was not interested in these two strange creatures that seemed to growl from their mid-sections.

A short while later we were sitting at a table in Mike’s restaurant, the ‘Keno City Snack Bar – Mayo division.’ 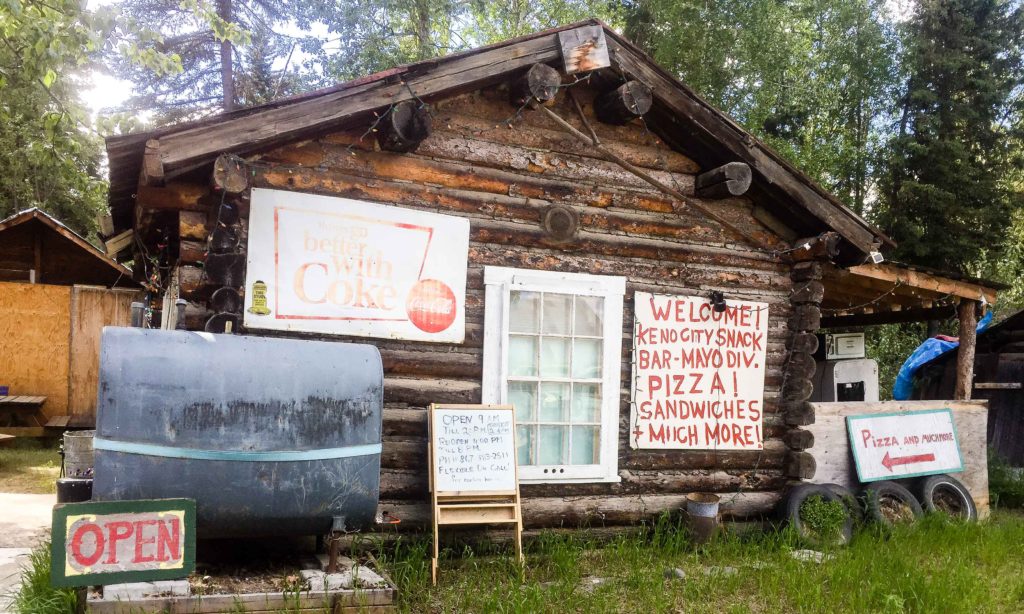 I know, it’s not much to look at, but books and covers, right?

There was one other customer eating his lunch at the long table to the left of the door, and Tom and I accepted his offer to join him. I apologize for not making a note of this young man’s name, as he had quite a story to tell.

It seems that a few weeks earlier, this fellow had been making the drive from Calgary back home to Mayo where he was about to start a new job and drove a little too long, fatigue setting in and causing him to fall asleep at the wheel.

His 1/2 ton truck left the road and rolled down the embankment, smashing the encroaching larch bushes and coming to rest in the ever-present evergreen trees.

A broken neck, dislocated shoulder, several bumps and bruises – and yet here he was, enjoying his lunch and telling the tale, recounting just how lucky he was to be alive, and facing a full recovery.

We all agreed that the universe has plans yet for this young man.

If you had seen the pictures of his truck, or the surgical scars on his neck, you would know exactly what I mean.

Mike served up our pizza while Tom and I were listening to this young man’s horrifying tale, and in truth it was a welcome distraction.

As a motorcycle rider, I often hear too many tragic stories of lives and limbs lost in the blink of an eye. Having suffered my own ‘by right’s it shoulda killed me’  wreck, I really don’t understand the macabre attraction that some  – many – people have to hearing of the tragedies suffered by others.

I hope that it gives each and every one pause to consider just how fortunate they are, and how precious – and tenuous this life is.

Tom and I dove into the pizza with an almost reckless abandon, and the subject matter turned to tales of our adventures and where we were heading next.

I have to tell you – that pizza – absolutely delicious, and I have no doubt in my mind that Mike Mancini makes the best pizza in the Yukon.

Bellies full and happy to have had my adventure enriched by 2 more souls, Tom and I got back on our bikes and headed further north and east along the Silver Trail, bound for Keno City.

Upon arrival, my immediate thought was ‘wow, this really is a desolate, abandoned ghost town’ 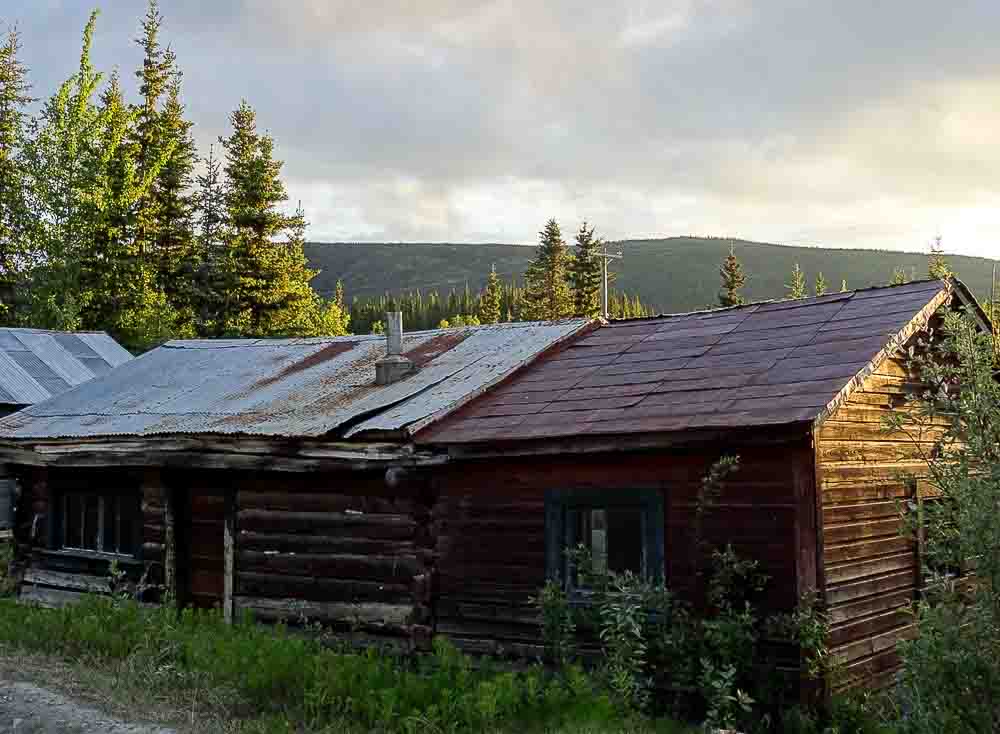 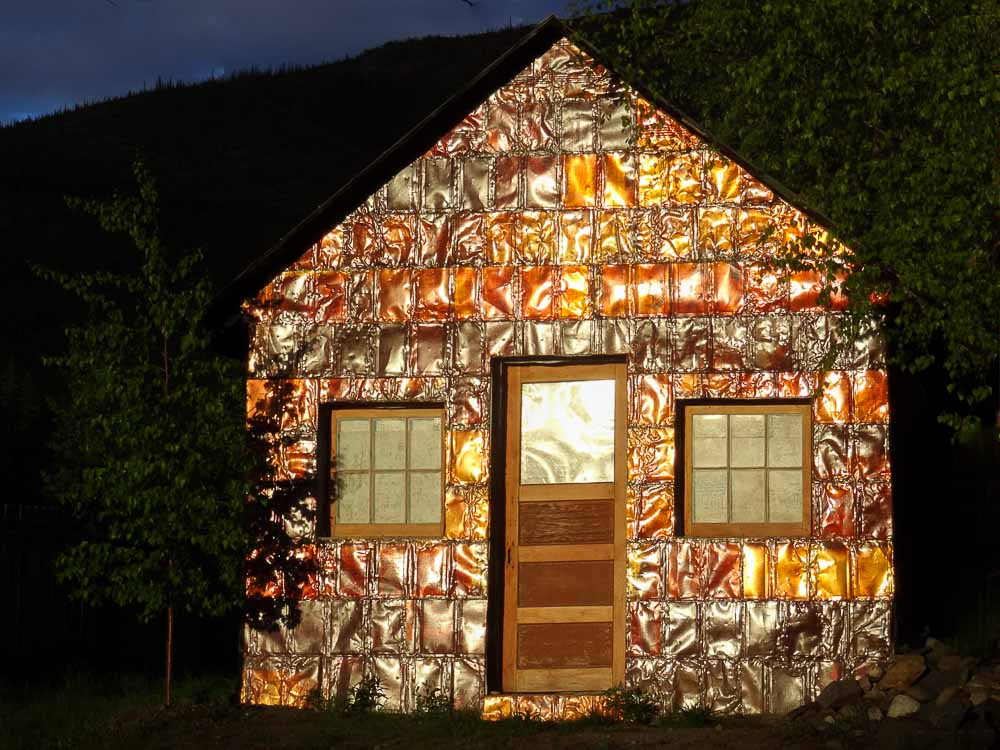 I turned left, driving past the Keno City Mining Museum and realized that those buildings were in good repair and appeared fresh – a hopeful sign. 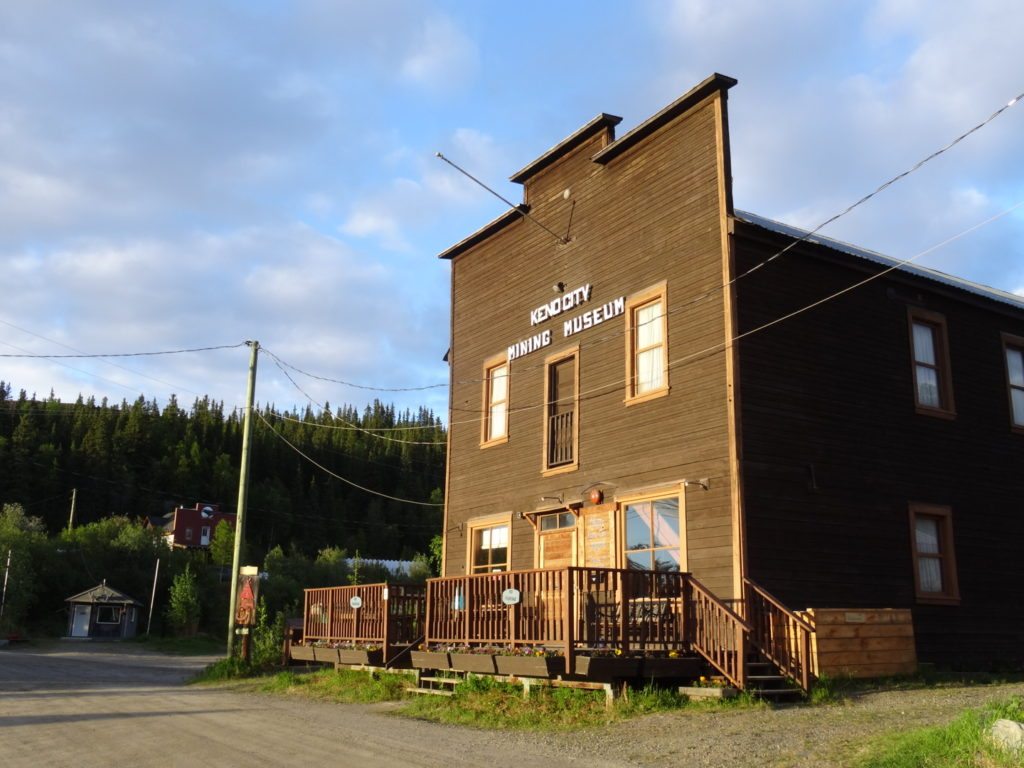 Turning around and heading in the opposite direction, Tom and I pulled our bikes up in front of the Keno City Hotel. 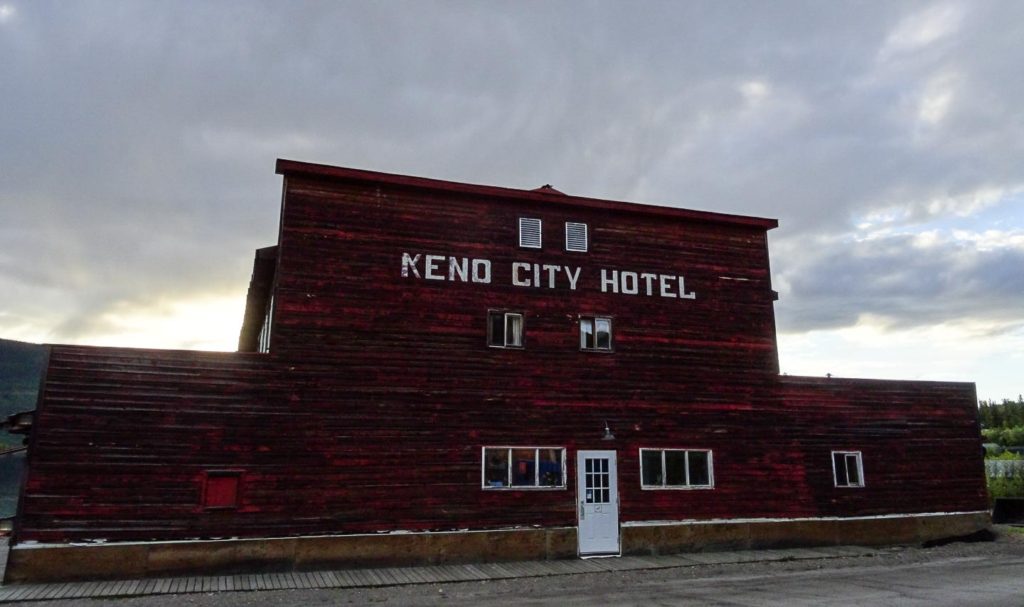 Rustic, weather beaten and maybe not quite as fresh looking as the Mining Museum, this building absolutely exuded character and charm. You could almost hear the laughter and music of 100 years ago chiming on the breeze as dust blew from the boardwalk, inviting us into the past. . . 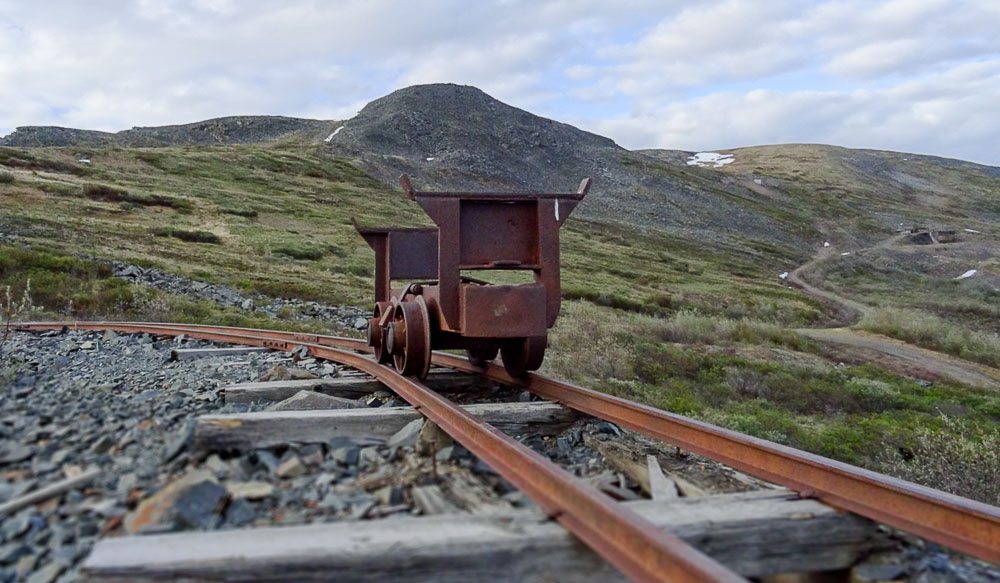 Up Next: Leo, Keno Hill and Abandoned Mines

Hey Joe – Hope you are able to keep track of the fire situation out in BC re your routes. Looking lovely up there, where you are.

Hi Sandy,
Thankfully I am safe and sound, back home in Ottawa now. I am continuing the 2 posts-per-week cycle until the story is told ?

Welcome back. I was thinking how much potential firewood exists in those mountain areas and how little warning there could be when fires start.
You do move fast tho – did you get to do/see everything you wanted?

I was not able to ride the new road from Inuvik to Tuktoyaktuk, but I saw so many places that I didn’t plan on, like Bella Coola and Williams Lake, and some truly incredible off-the-beaten-path places like Keno City (next post) and Telegraph Creek that I have absolutely no regrets. The D2D Adventure turned out to be so much more than I ever expected, and I have a growing list of must-see spots for next year!

Oh and yes, the entire west and northwest of Canada can become a tinder-box during a dry spell.
I saw one forest fire on my way home near Kleena Kleene, BC
It was incredible to see just how fast it grew and spread.
Today the province is in a state of emergency due to several forest fires.
I pray they get some rain soon!