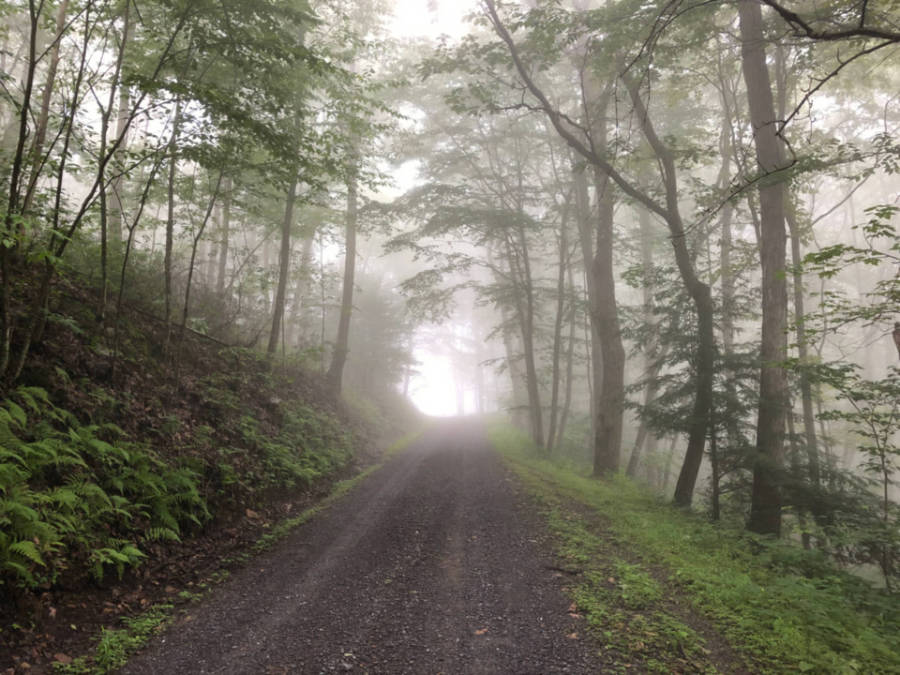 Tackling the MABDR for a second time

If you read my last post then you know that I decided that tackling the MABDR for a second time was to be my main riding goal for this season. I managed to get out and ride the Puppy Dog Route with my friend Alain in early June and had a great time – so much so that I am planning to ride it again with two more riding buddies in late July as a part of our Mount Washington ride – but having had to bail out on day 3 of the MABDR last year left it at the top of my ‘must-rides’ list for 2019.

Well, in a phrase: Mission accomplished!

The original plan last year was to see my friends Claude and Ron join me on the MABDR adventure. Life happened and Ron was unable to join, so Claude and I headed for the mountains on our V-Stroms.

This year the plan once again was for the 3 of us to ride the MABDR, however it was Claude who was unable to make it so Ron and I headed out for Damascus, Va together on Sunday, June 30. Ron was riding east from Toronto on his KLR650 while I headed west from Ottawa on Big Ethel, my 2014 Suzuki V-Strom.

We met on Hill Island on the Canadian side of the international border and headed into the USA on an overcast and cool morning that would turn into a hot and sunny afternoon. This was to be the least enjoyable day of the entire adventure simply because we spent the entire day slabbing it on Interstate 81 – an absolutely horrible road for motorcyclists mainly due to the incredible amount of traffic, the incessant drone of the the knobbies and the lack of shade from the oppressive heat. However, when your destination is almost 14 hours travelling time away, the interstate is generally the most direct route.

Our goal for that first evening was the Mountain Creek Campground just outside of Carlisle, Pennsylvania. That made it about an 8-hours-in-the-saddle kind of day, almost 10 hours all told what with fuel and food stops, so we were both quite happy to get off of the interstate near Carlisle and ride some really beautiful little 2-lane to the campground. It was after 6:00pm when we arrived, and almost 7:00pm by the time that we had our tents setup, gear stowed and went looking for a place to eat.

It turns out that Mount Holly Springs, one of the points of interest along the MABDR route, is a mere 10 minutes away from the campground so off we went in search of some vittles. As we approached the town we came to an old Inn with a Harley parked out front and, going on faith that Harley Davidson riders know where to find good food we parked our bikes and walked inside.

I assure you that the food and ambiance alone are enough to validate adding the Holly Inn as a POI on the ride, but there is much more to this piece of living history than just good eats and local charm. The Holly Inn possesses historical importance that, for me anyway, kind of set the tone for the rest of the adventure.

I was no longer simply just riding through several states, over various mountains and through myriad valleys and hollers.

I was riding through time.

You see, the Mid-Atlantic Backcountry Discovery Route leads it’s riders very close to, and in some cases right through some of the most historically significant locations of the entire United States of America.

And also through some lesser-known but history-rich locations.

“Here Lies A Confederate Soldier Known But To God”

There is a photographic history of Mount Holly Springs and the Holly Inn adorning the walls of this storied old building. Reading about a Confederate soldier who met his untimely demise at the Holly Inn while marching to the battlefields at Gettysburg allowed me yet another lens through which to view and appreciate my life and my travails.

When Claude and I were down here last year we met several other riders who went out of their way to show us some awesome roads, both asphalt and gravel – and I had reached out to two of them – Greg and Robert – before leaving Canada.

Greg and I had made arrangements to connect on Monday somewhere near the start of the trail in Damascus, Virginia. That meant that Ron and I another 6 hours of tortuous riding on Interstate 81 or, we could throw a side-trip in there and ride some of Skyline Drive and turn that into 10 hours of riding. Which is exactly what we did.

Sometime in the future I am going to return to the Blue Ridge Mountains and ride Skyline Drive again as a destination ride rather than a side-trip because quite honestly I was so focused on how long it was going to take us to get to Abingdon Virginia that I was not able to truly enjoy the ride. My only notes from the day read: Pretty but slow – 35mph limit

Ron and I eventually got off of Skyline Drive and hit the highway once again, making a beeline for Abingdon and the Super 8 hotel. Though the skies were clear we had been riding in 95 degree heat with high humidity and we were both looking forward to air-conditioning. The fact that the hotel room only cost us an additional $20 more than last nights campground made it an even easier decision to make, lol. We made it to Super 8 at 8:30pm – exhausted from a combination of highway drone, trucks, traffic and heat.

Tuesday – The Snake421, starting the MABDR and the Back of The Dragon

After an incredibly good night’s sleep Greg met us outside of the hotel early on Tuesday morning. It took about 30 seconds to settle my internal debate: do we ride the Snake 421 before we start the MABDR or do we wait until we have covered the first couple of hours on the MABDR itself and then ride the Back of The Dragon from Marion to Tazewell?

“Why not ride them both?” Greg asked. I looked at Ron. ‘I’m good with that’ he replied.

A little over 90 minutes later we were stopped at the Shady Valley Country Store on highway 421 in Tennessee, shopping for stickers and T shirts and taking a short break before heading to Damascus and the start of the MABDR.

I have mentioned it before, and I will say it again: if you are ever in the area make a point of riding the Snake 421 – you will not soon forget it!

We stopped at the 7 Trails Grill for a bite when we got to Damascus and then made our way to the beginning of the trail, stopping for the obligatory photo at the waterfall that marks the official ‘starting’ point. Just like last year we rode the MABDR only as far as Marion, Virginia as this happens to be where the ‘Back of The Dragon’ starts and, well, the weather was looking a little grim too. 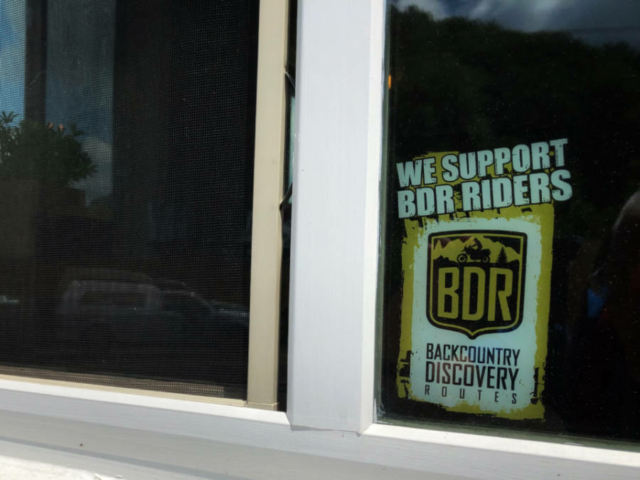 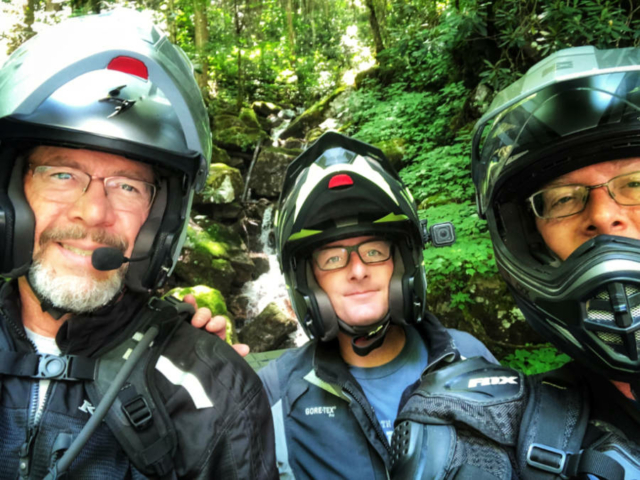 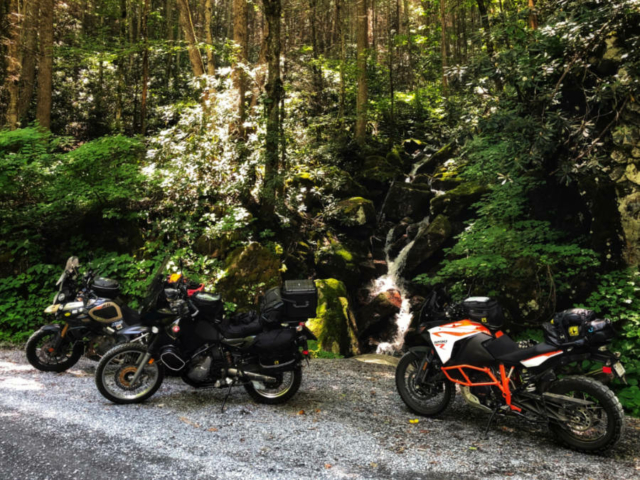 A room at the Red Roof Inn was the perfect solution. A swim in the outdoor pool removed most of the road dust and I took the opportunity to remove all of my gear from Big Ethel, lightening her by 50+ pounds before heading out to once again tackle highway 16 from Marion to Tazewell.

And this is a great point in the ride to take a break, otherwise I’ll never get this post published.

Next up: The Back of The Dragon; Burkes Garden and more of the MABDR

Great reading bro – hurry up with next installment!

The next post is almost ready to go Kim – thank you for your patience and for continuing to ride along!

The next post is almost ready to go Kim. Thank you for your patience, and for continuing to ride along!