Categories Menu
Home » ADVENTURE » Adventures Out East: One Beautiful Island to Another

Adventures Out East: One Beautiful Island to Another 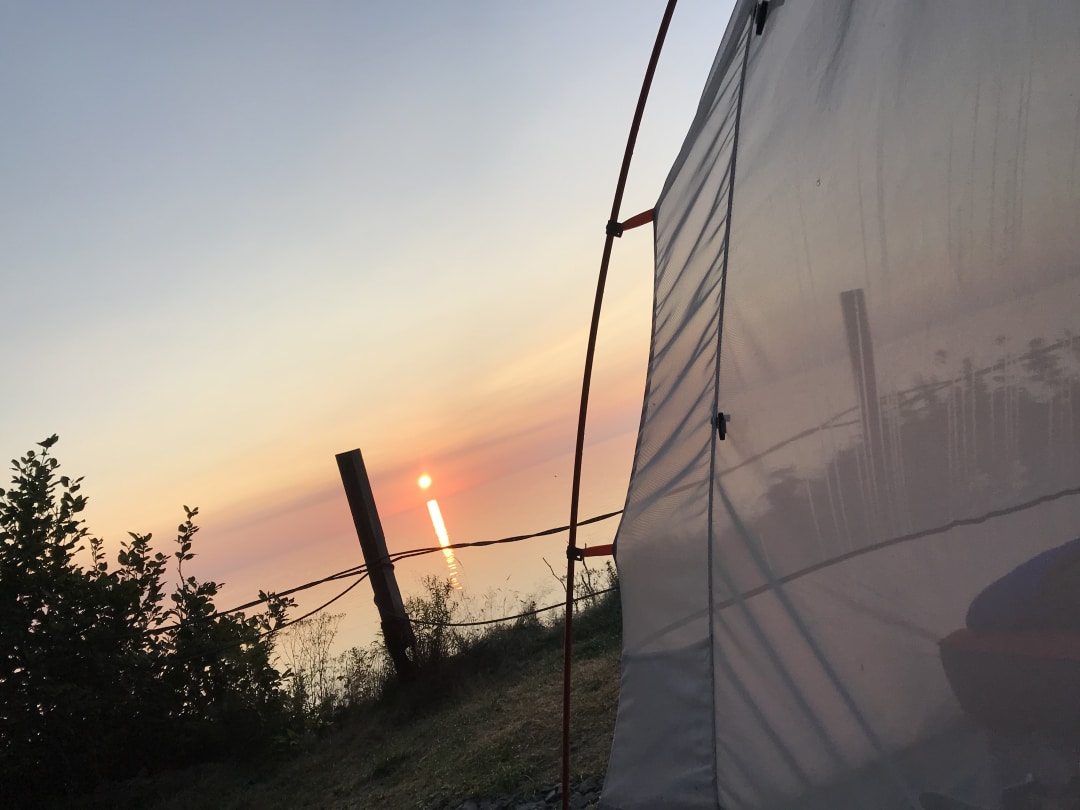 I awoke on Tuesday morning just before dawn to a glorious sunrise on the beautiful island of Grand Manan. I watched a seal that was swimming in the calm waters just below my tent, and even got to see a whale ‘logging’ for a minute on the surface. I was too mesmerized by the sight to even bother grabbing my camera from my tank bag, but I did manage to capture the sunrise.

Within 12 hours I would be setting up camp on yet another beautiful island. 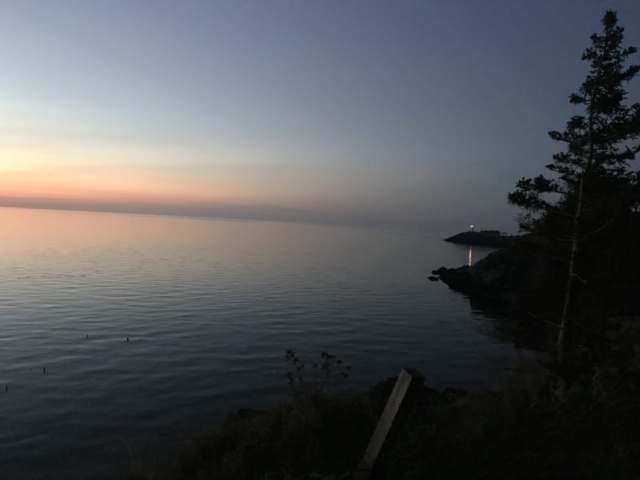 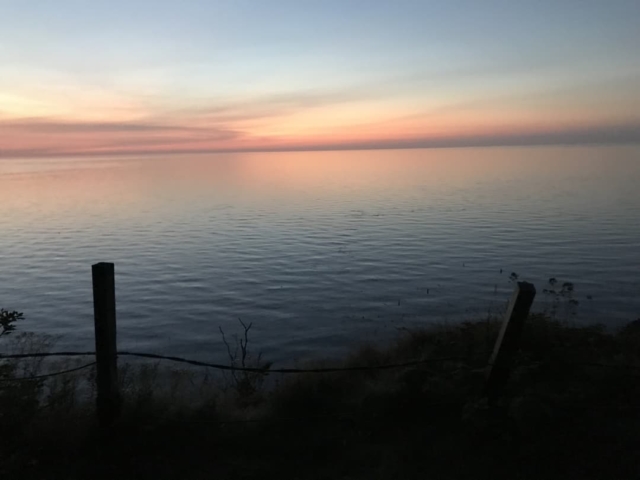 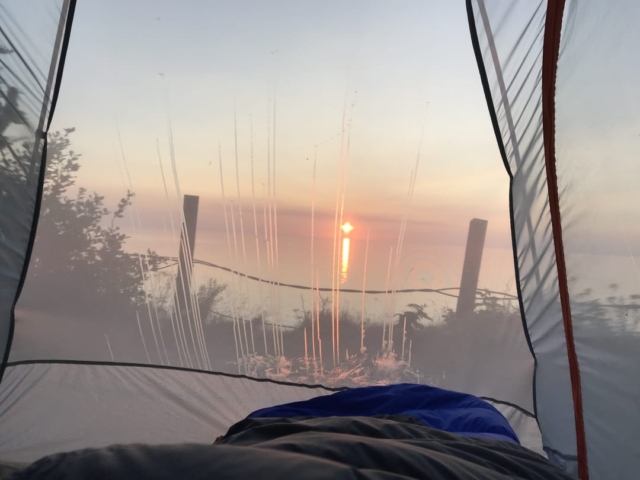 After getting caught up on my trip notes I slowly packed up my camp, accidentally dropping my iPhone on the only large rock in my campsite and breaking my new screen protector (I had just had it replaced a week before leaving on this trip) before heading back towards the ferry terminal to have breakfast at one of the local restaurants. There I ate my bacon, scrambled eggs and one pancake while listening to the three woman at the table across from me try to come to an agreement about just how difficult it was to travel together. Each was voicing their complaints about the others, to the point where one of the women simply got up and walked away, frustrated to the point of tears.

I felt so sad for them. Here we were, in a veritable paradise, and they were as unhappy as could be.

The scene provided yet another opportunity for me to reflect and feel gratitude for my life and my opportunities.

And my comfort with travelling alone.

I had a reservation on the 1:30 pm ferry back to the mainland at Black’s Harbour. While finishing my second cup of coffee at breakfast though, I realized that I was completely satisfied with my experiences on the island and decided to see if I could change my reservation and board an earlier ferry.

I was in luck, and an hour later I was sailing on the 11:30 am ferry back to the mainland. Just one more advantage to maintaining a fluid rather than rigid schedule.

My plan was to ride into Nova Scotia after docking at Black’s Harbour, however a quick check of the weather while aboard the ferry changed that plan as well. There was heavy rain forecast for that evening and the next day in much of Nova Scotia, but PEI was calling for warmth and sunshine! Can you guess where I decided to go?

(I am posting several links in the next section that I hope will provide you with enough inspiration to get out and explore this little piece of paradise for yourself.)

When I began planning this journey my intention once on Prince Edward Island was to return to the cabins in North Rustico where Mike, Jeff and I stayed back in 2015 during our Trans Lab Adventure, however I found $160.00 per night to be an unnecessary expense for a solo rider and decided to check my options. I stopped at the Information Centre immediately after crossing the Confederation Bridge and picked up a map and got a couple of Provincial Park recommendations from the lady behind the desk. 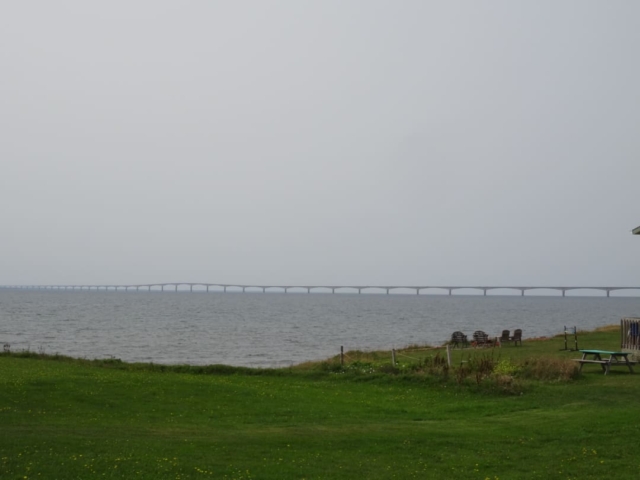 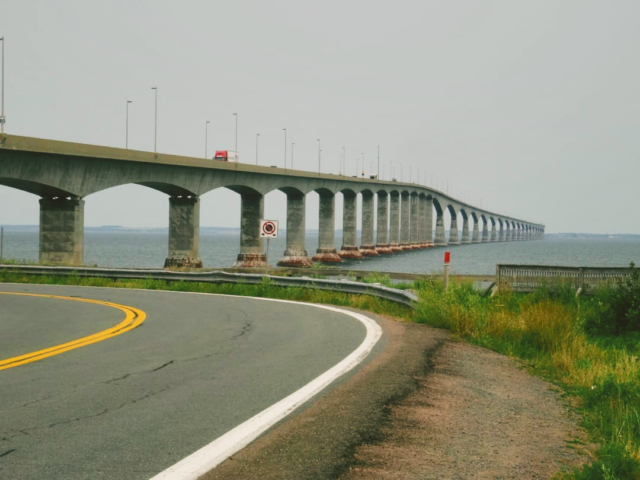 25 minutes later I was setting up my tent at Linkletter Provincial Park. This park has really nicely treed tent sites, each with a picnic table, fire ring and potable water and there are also clean, hot showers and a well appointed laundry facility – all right on the ocean – for $30 per night. 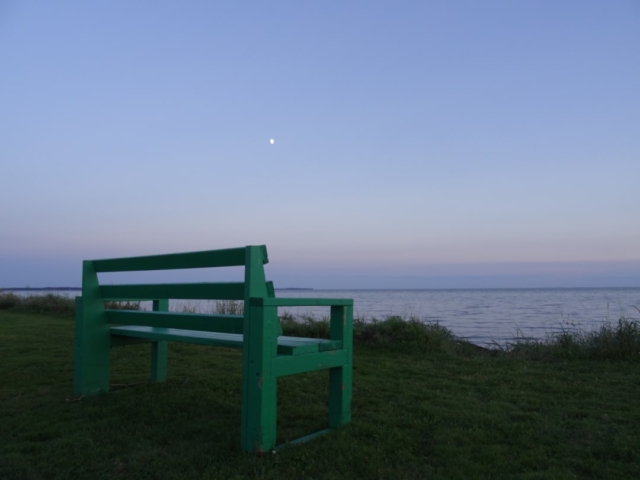 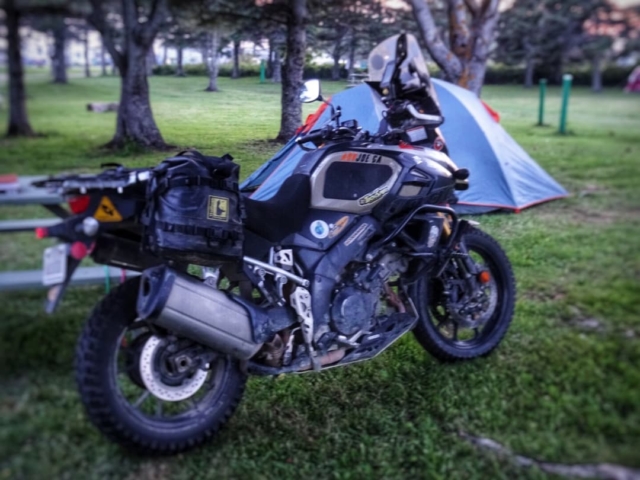 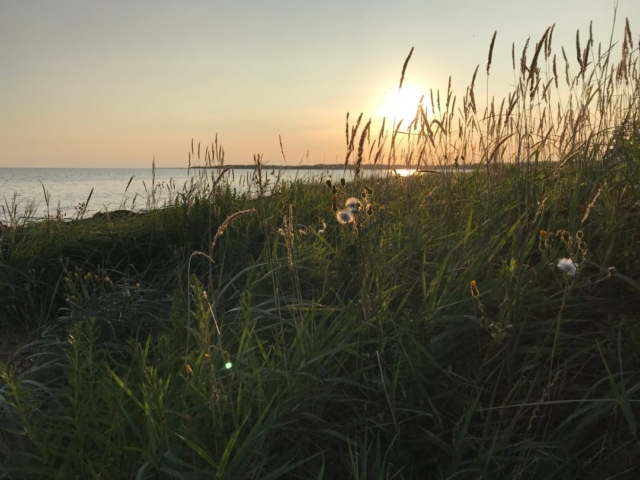 I performed a little motorcycle maintenance (chain cleaning and lubricating) and enjoyed a camp supper of re-hydrated Pad Thai – very spicy – and watched the sunset over the Northumberland Strait with several other travellers before being lulled to sleep by the sound of waves crashing on the shore. I had awoken to a glorious sunrise on one beautiful island and watched an incredible sunset before bed on another. Can it get any better than that? 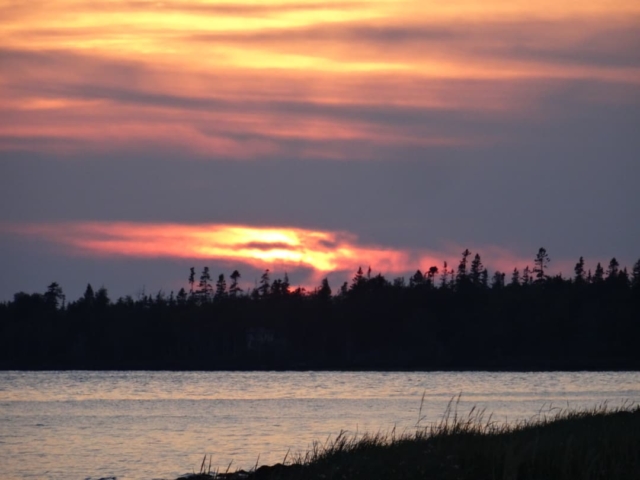 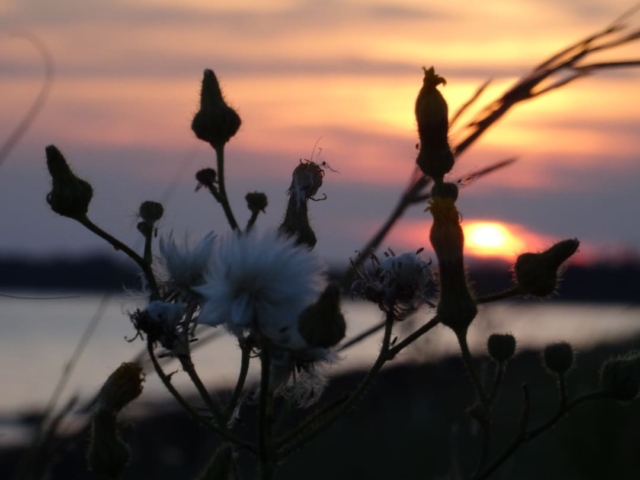 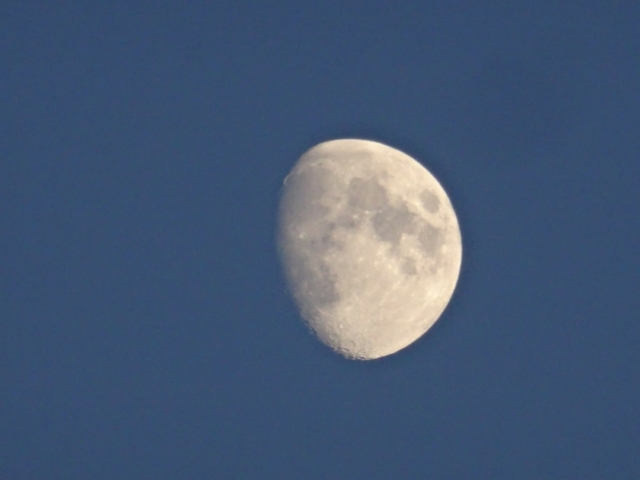 No plans, just enjoying the ride

Wednesday morning I once again awakened to what I have come to understand as the soundtrack of the east coast: waves crashing, gulls calling and laughter tinkling on the wind. I had yet another great night’s sleep in my tent and was excited to see what the day held in store for me.

I ate a delicious camp breakfast of coffee and rehydrated apple crisp, packed up my camp and hit the road to – where?

Well, that was the question, wasn’t it?

I decided  to take my time and ride the coastal roads, seeking out lighthouses along the way. Leaving Linkletter Provincial Park I turned left heading west on route 11, travelling through the small lobster and fishing communities of Mt. Carmel, Cape Egmont and Egmont Bay. There is a huge Catholic Cathedral in Mt. Carmel, seemingly far too large for such a small community and I stopped to take a closer look and yes, get some pictures. 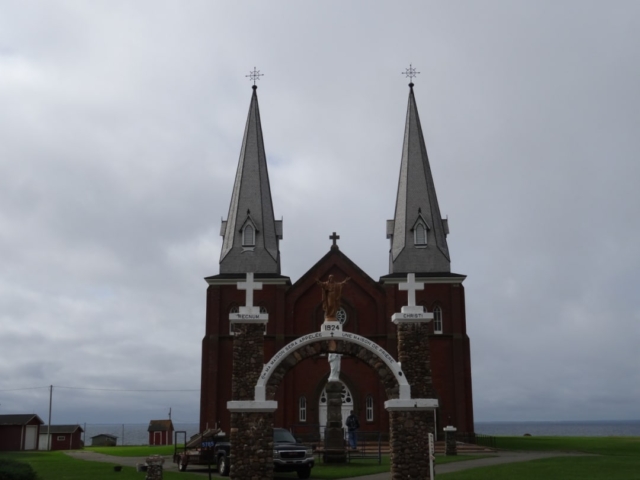 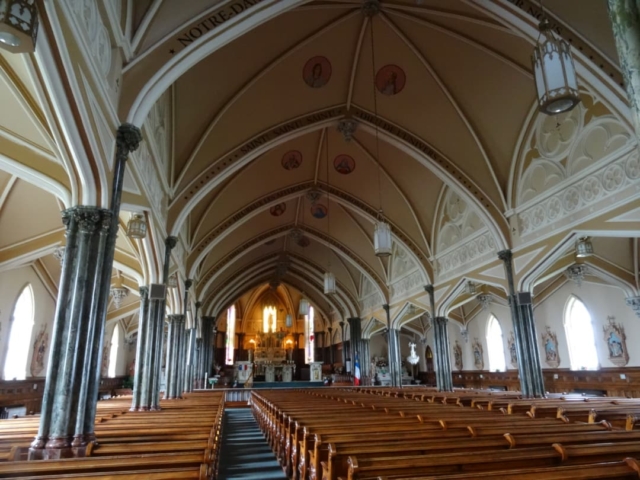 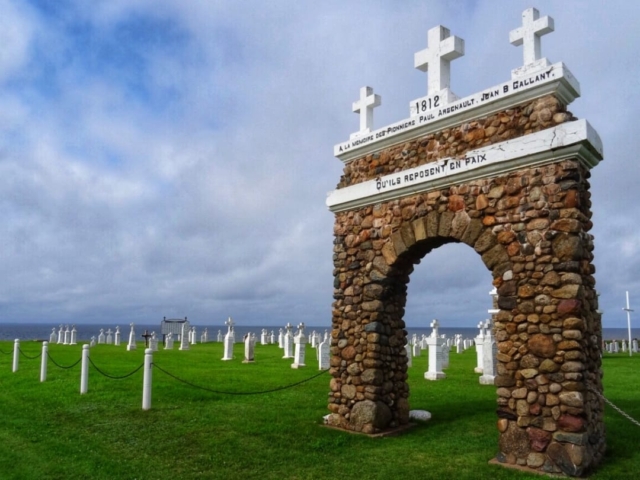 Continuing west and north on route 11 I passed the popular ‘Bottle House’ attraction but I decided not to stop as I had seen several photos taken by my friend Bonnie when she had last been out east.

I eventually arrived at West Point and the West Point Lighthouse (the sound of a gruff-voiced drill sergeant yelling “It’s about damned time boy!” in my head)  and of course, laughing at the absurdity of it all. I have never been in the service, and I may be 51 years old, but I spend most of my life in the mindset of an adolescent, imagining the movie that is my life and randomly laughing with sheer joy. I guess I was a recruit in this one, hahaha.

Yes, I absolutely refuse to grow up! 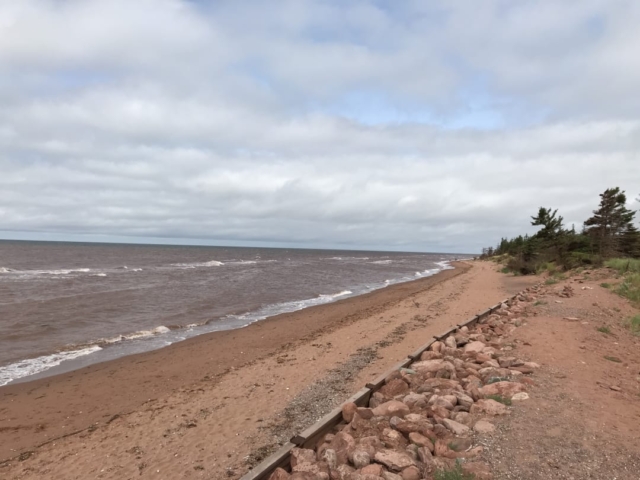 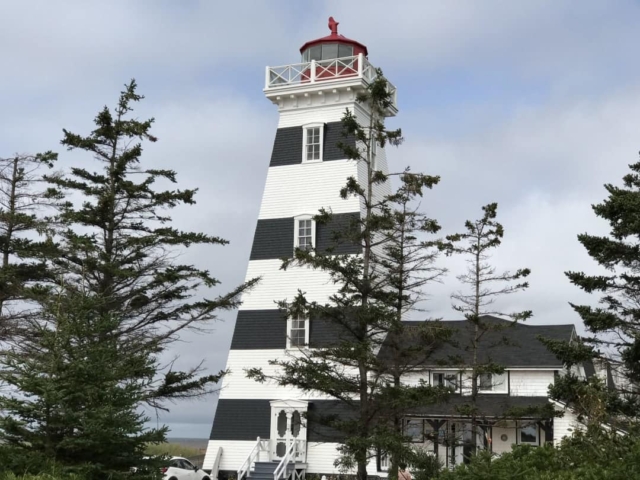 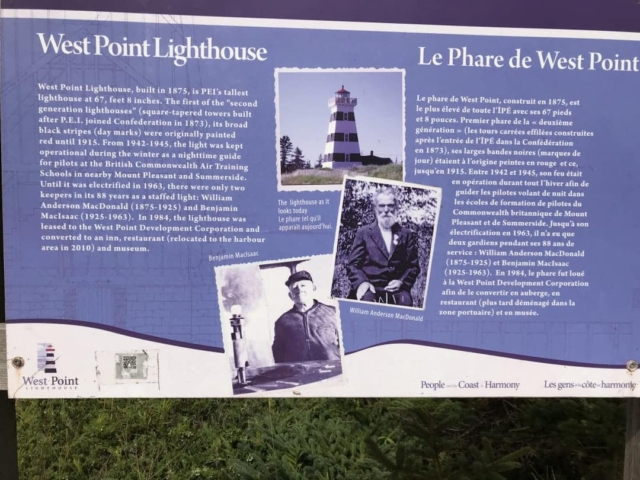 I spent some time on the beach just listening to the gulls and the waves before hopping astride Big Ethel and continuing my exploration of this beautiful place. I had only been on Prince Edward Island for less than 24 hours but I already knew that I would be making this my decompression stop after the Fundy Adventure Rally every year from here on out!

As I continued my ride west and north from West Point I found myself smiling broadly as I rode through several more small communities with really interesting names where I learned a thing or two along the way. Such as riding through Skinners Pond and discovering that it was the childhood home of Stompin’ Tom Connors  or riding through Christopher Cross and discovering that the hot rod scene is alive and well on PEI. 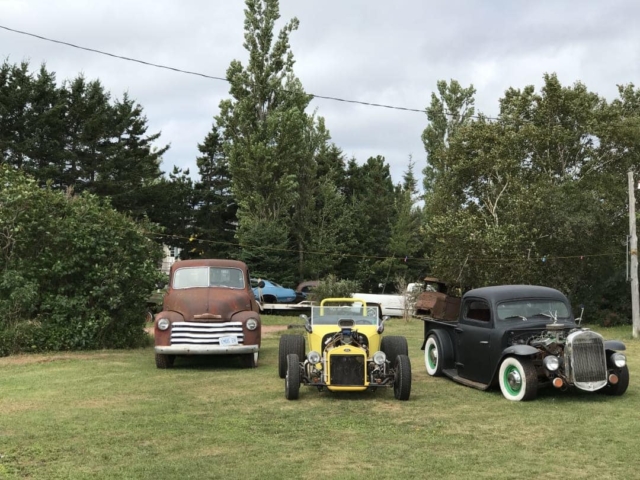 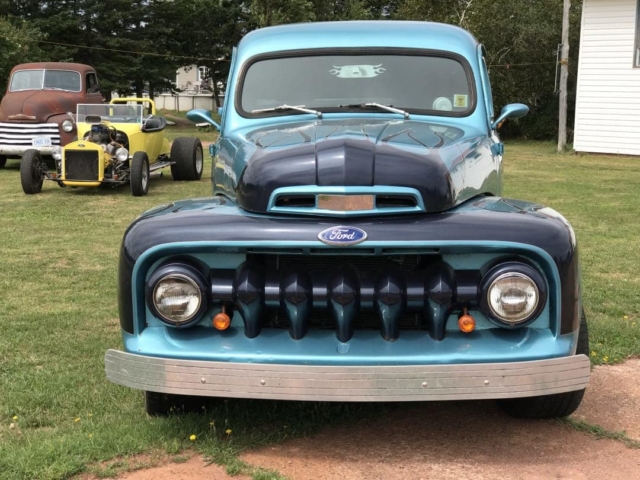 I even went to Norway

I hung a left onto highway 182 from the 14 and headed into Norway looking for the North Point Lighthouse. I didn’t find it here, but I did find some really big wind turbines and a really big crane and some really beautiful cliffs along Norway road. The crane was huge, with 140 tonnes of counter weight on the deck and a boom that was easily 50 meters long. I found myself wishing that I could have witnessed this behemoth performing its tasks – it would have been really cool to see such a huge, live Tonka Toy in action! 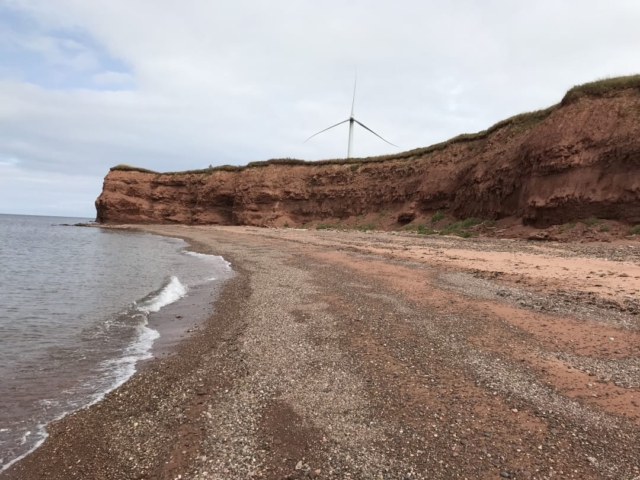 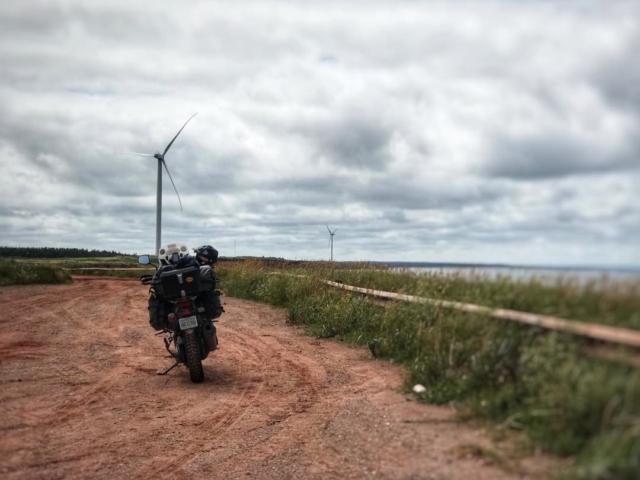 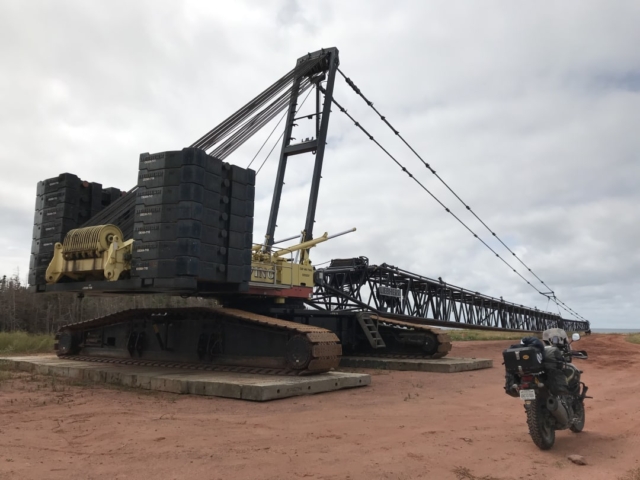 I explored the beach here as well, making a mental note that it would be a great spot for rough-camping when I come back next summer before getting back on the bike and continuing my explorations of this incredibly beautiful island province. 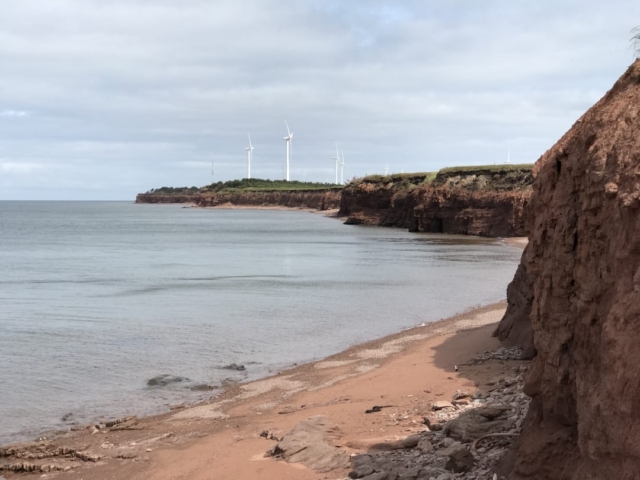 And you know – I think I will leave you here, at this point, before we get to North Point. Let’s save that for next week. There is so much left to say about Prince Edward Island, and I truly hope that I have been able to give you at least a small glimpse through my photos and my descriptions. In many ways, the best is yet to come!

No matter how you look at it, Prince Edward Island is beautiful.

cool , good for you to have enjoyed a differant adventure on the coast at this time of year . a true biker .

I had such a great experience out east Bill! I’m already looking forward to my return – maybe with my snowmobile this winter ?