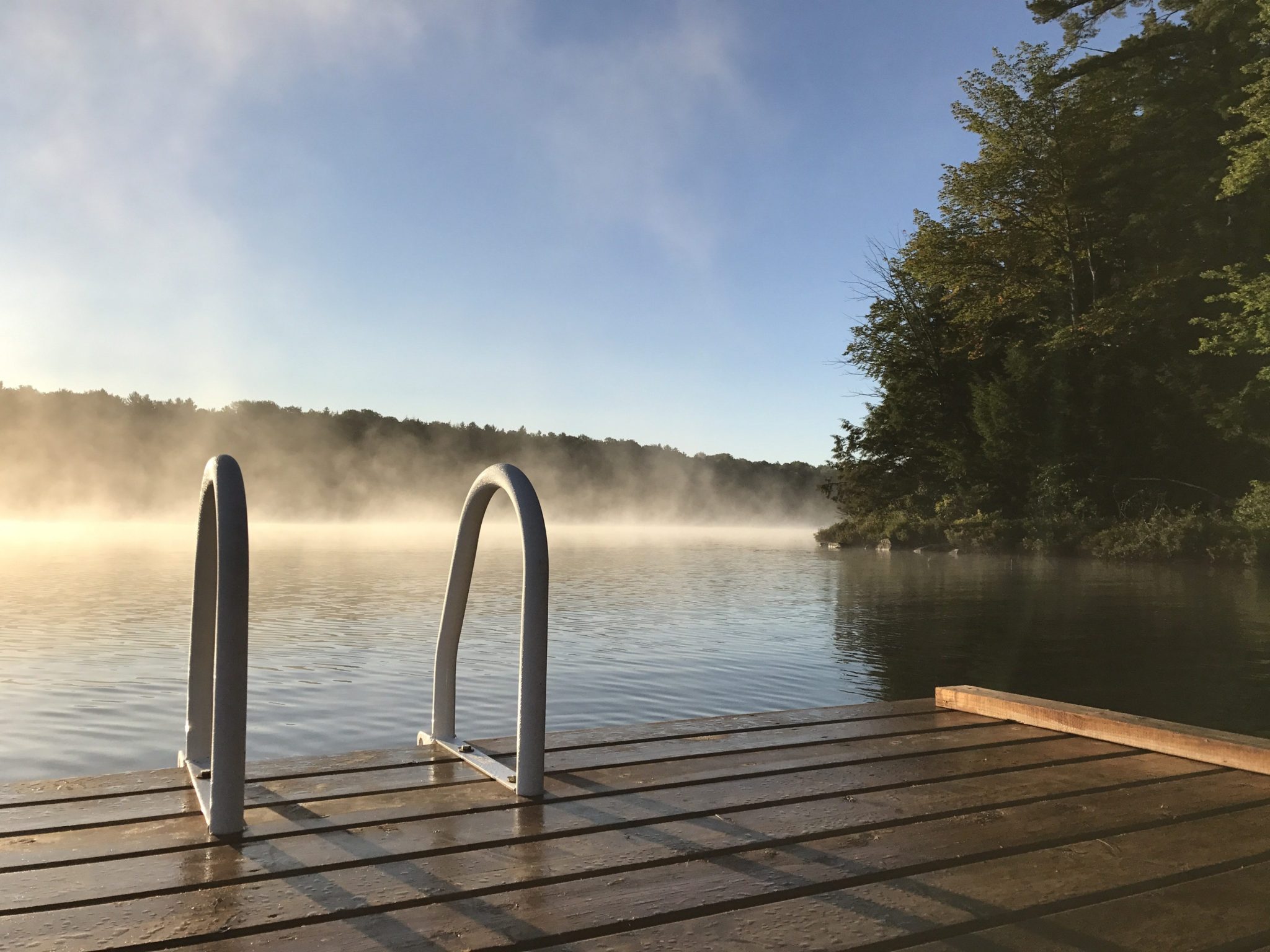 In early September I packed a couple of changes of clothes, my sleeping bag and my laptop into my Wolfman Expedition saddle bags, hopped astride Big Ethel and headed out to Bracebridge Ontario for the 4th annual Horizon’s Unlimited Ontario Travellers Meeting.

I had only been home for 3 weeks and was still nursing the broken ribs that I had suffered at the Fundy Adventure Rally in mid-August, and there were a couple of days where I thought of just bailing on the event altogether, staying home instead to lick my wounds.

But that would be too much like old behaviors.

Besides, I had always had a great time at the HU Ontario event in the past – and I was giving a presentation on my trip to the Yukon this year – so my own kick in the ass was all that I needed to get me into the right mindset.

I had also just sold my fully-farkled DR650 the week before, so this would be an opportunity to test the only two theories that exist in motorcycle ownership:

Honda Canada always has a fleet of current models available for test rides at the Horizon’s Unlimited Ontario Travellers Meeting, and Clinton Smout has been bringing a bunch of BMW’s to tempt the uninitiated into the world of Bavarian adventure bikes. 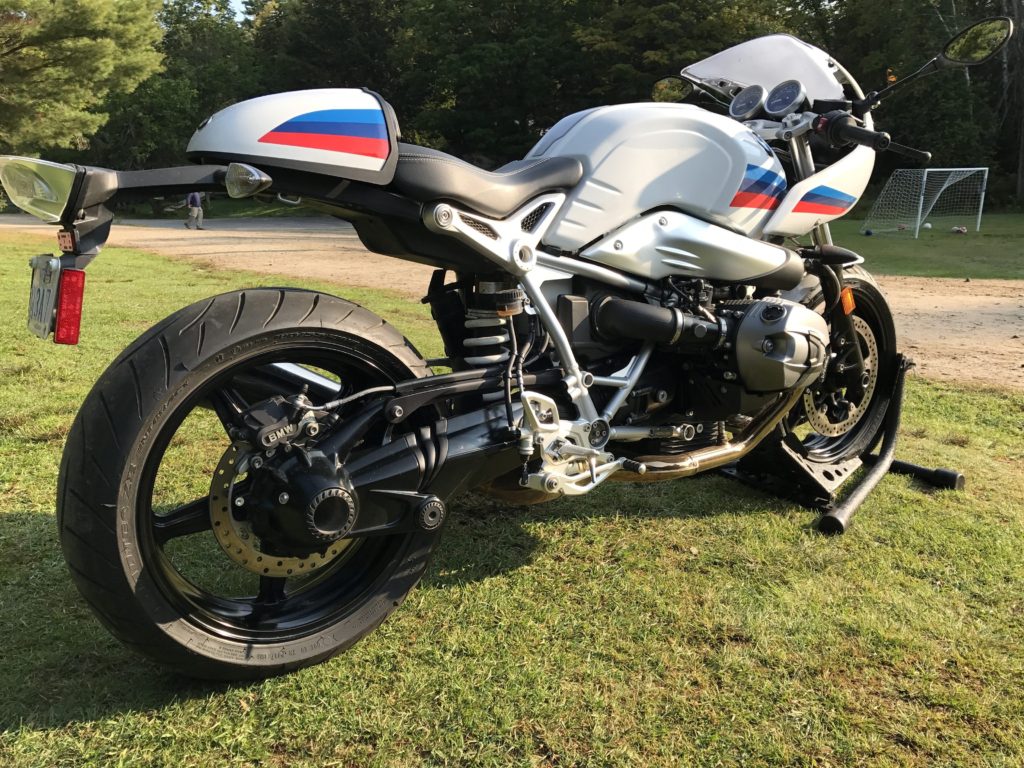 I have actually made a point of never taking a Beemer for a test ride. I am an impulse buyer, and I fear that I would like the BMW too much to resist the temptation.

Because I live in an apartment building with no secure parking, I choose not to keep my bike at home. Currently Big Ethel resides in a friends garage in Kanata, but on this day the big V-Strom was at my buddy John’s house in Innisville, Ontario.

On my way out of Ottawa, heading to Innisville to grab the bike, I stopped for fuel and coffee in Carleton Place and it was there, in the Tim Horton’s parking lot that I saw this bike with what might be the worlds biggest top case. 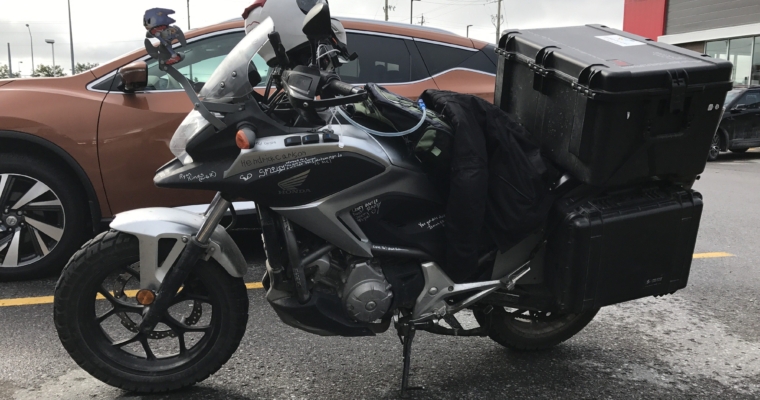 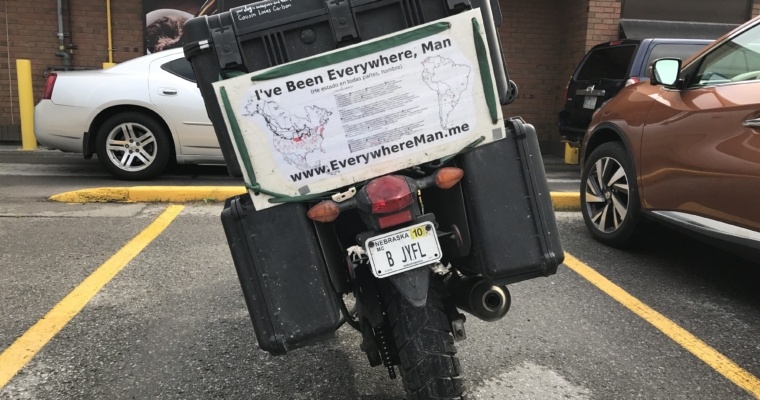 I parked my Malibu in order to get a closer look, and then headed inside – I really wanted to meet the owner of this mid-sized Honda with the extra large-sized top case.

It took all of 4 seconds to recognize that the guy sitting at the table tapping away at his laptop was the rider and I ambled over to confirm.

“Are you the owner of the world’s biggest top case?” I asked.

“It’s not that big is it?” came the reply from behind a broad grin and smiling eyes.

And that was I how I met Brett Anderson, also known as everywhereman. 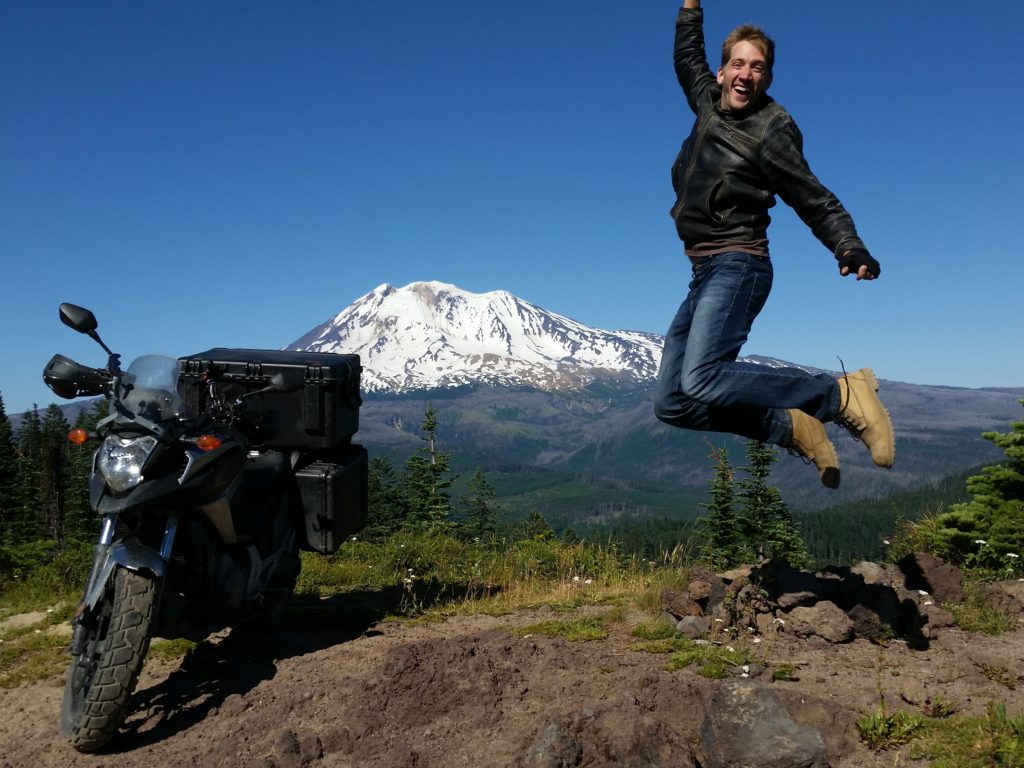 Brett is from Nebraska and likes to listen to country, story-telling music.

Then, apparently, he likes to live the story.

If you are familiar with the song, then you know where this is going.

If you’re not, well, check out this wicked-good blog that Brett is writing about his current adventures.

Actually, read the blog anyway, whether you know the song or not – it is that good!

Brett and I chatted for a few minutes – really just long enough to introduce ourselves and tell each other a little about our current travels – as I was a little pressed for time.

Brett had not heard of Horizons Unlimited before, and I hope that my enthusiasm about the HU Travellers Meetings motivates him to attend and even present on his travels some day. 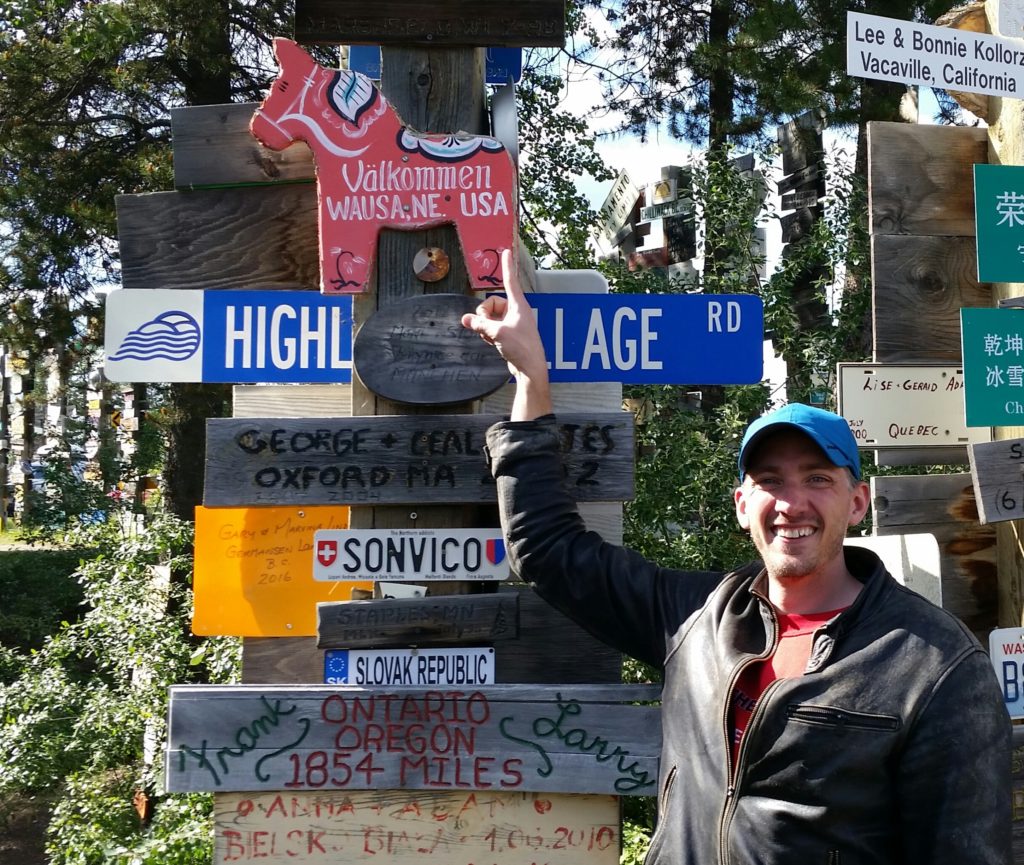 I asked Brett to send me a few pictures for this post – Mount Adams, Watson Lake and Salmon Glacier are all courtesy of everywhereman. 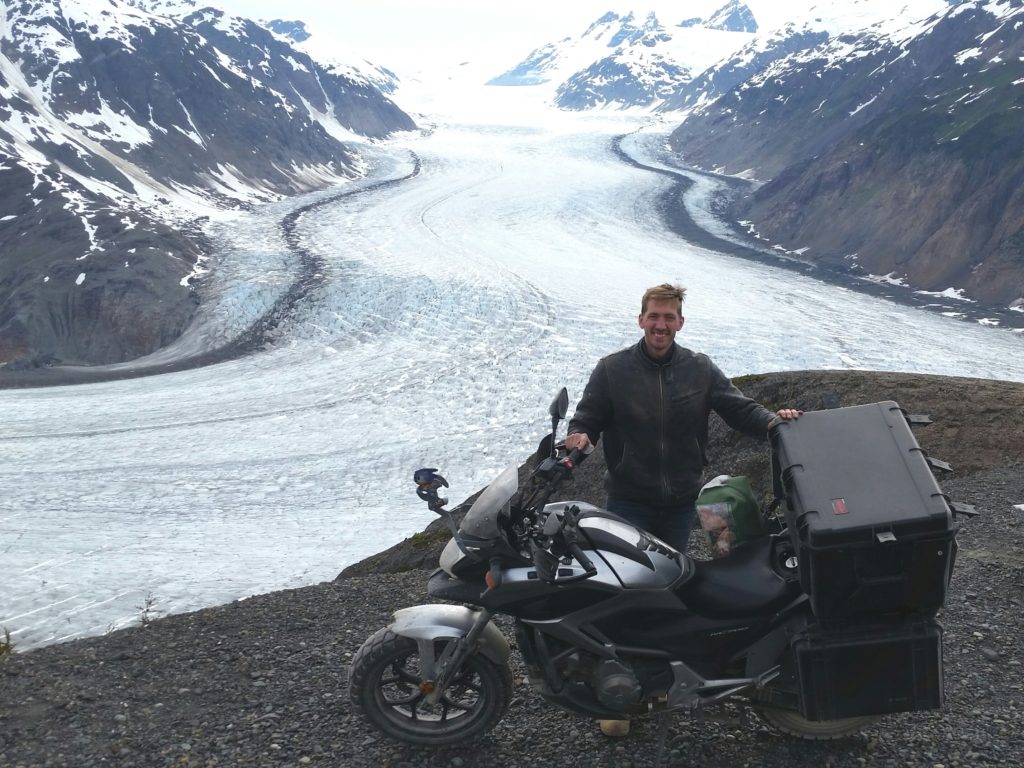 One thing is for sure – I am going to do my best to cross paths again with this young man down the road some day.

After all-to-brief a chat, I was back on the road heading to Innisville to park the car and get on the bike.

Once I was sitting in the saddle and on the highway heading to Bracebridge I fell right into the zone, at once completely aware of my surroundings and one with my bike, in and out of cloud cover and some light showers, dancing down the highway towards highway 62, where I turned north and headed up to Bancroft before turning west again on highway 118 and heading into Bracebridge.

It was a chilly ride, and though the skies threatened heavy rain I never got more than a quick shower, which suited me just fine!

I arrived at Camp Tamarack at around 4:00pm and went inside the main dining hall to register and to chat with Greg Powell, the lead organizer for the HU  Ontario Meeting.

The premise for the Horizons Unlimited Travellers Meetings is simple: like minded individuals from around the globe congregate in a given location for 3 days of camaraderie, sharing, learning and talking all things overland travel oriented. It is not simply about motorcycle travel (though riders make up the lion’s share of attendees) but is inclusive of all forms of getting from point A to point X. Unimog’s, RV’s, Westfalia’s, bicycles, and every other type of vehicle can be seen at an HU Travellers Meeting.

The highlight of the weekend is, for me at least, the presentations of epic adventures that are put on by the travelers themselves.

Needless to say, my adventure-travel itinerary continues to grow. I can see myself in New Zealand before too long . . .

As mentioned at the beginning of the post I also presented at this years Horizons Unlimited Ontario Travellers Meeting.

My slide-show and narrative were, of course, about my recent travels through Canada’s north during my Dust 2 Dawson Adventure.

As is always the case at one of these gatherings I met loads of great people – and an Instagram sensation to boot!

An up-and-coming recording artist, Kassie Tyres has been providing the musical entertainment at the HU Ontatio Meeting for a few years now. Also an avid motorcycle rider and traveler, Kassie has an inner-spirit that will absolutely carry her to unimaginable heights!

You can check out her music – and buy it too – right here kassietyers.com/music

Unfortunately, the turn out was a little low this year for the Horizons Unlimited Ontario Travellers Meeting – there were approximately 120 attendees, which is significantly lower than the 200 to 300 hundred that have arrived in the past. 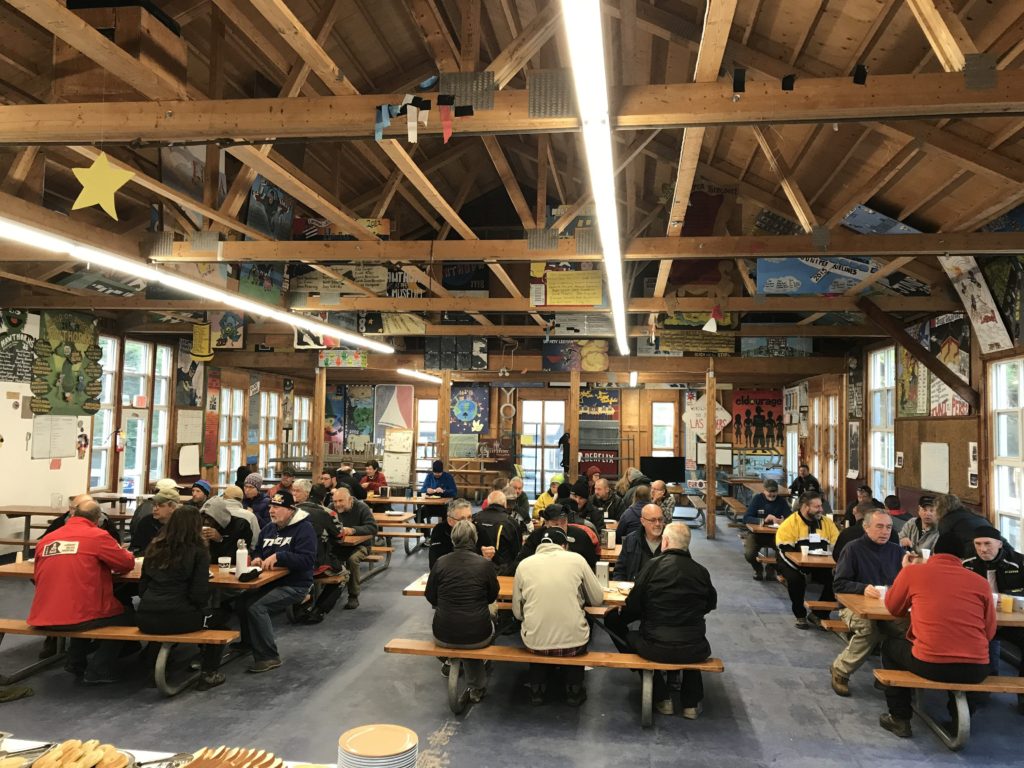 There were, I believe, 2 main contributing factors:

1) the weather – it was cold, overcast and at times, quite rainy

That would explain why there were only a few Americans at the Ontario meeting – they were all in North Carolina!

Oh well, not to be daunted, we all had a great time, learned something new, found a must-see travel destination, and made some new friends.

You can’t ask for much more than that now can you?

I’ll sign off this post by saying thank you to Greg Powell for once again doing a great job of keeping the ship sailing true (and you too Liz) as well as to Jean and Ross Copas for managing all of the technical aspects for the presenters, and to all of the volunteers who always go above and beyond to ensure that a great time is had by all. 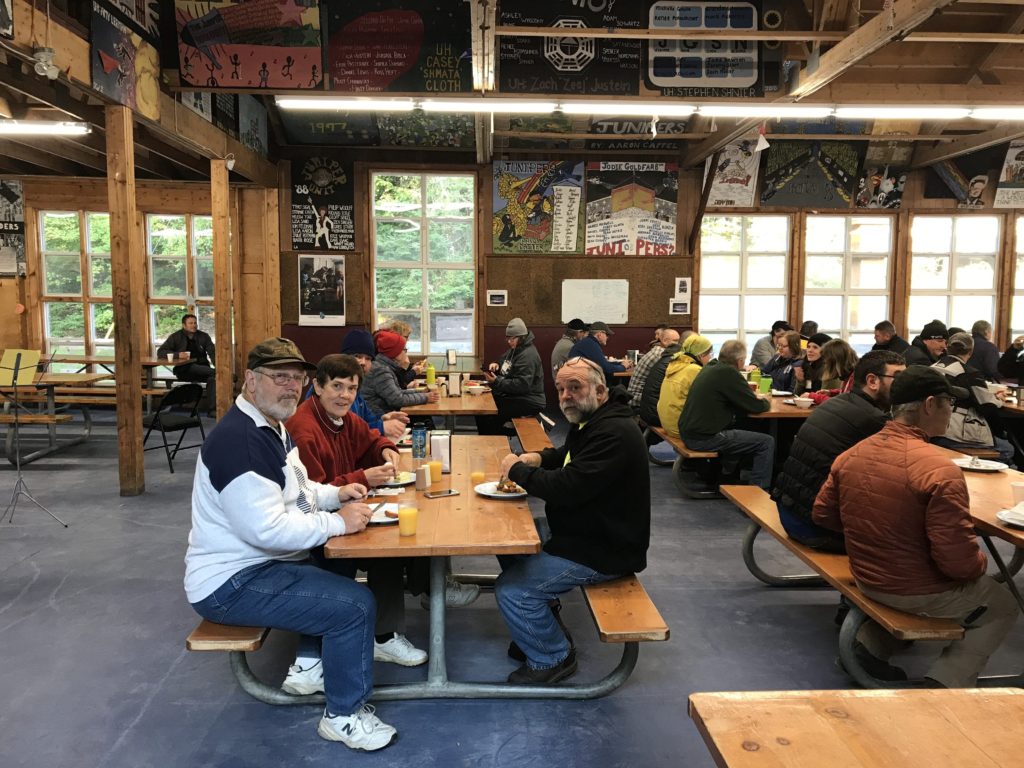 Oh – and the kitchen chef and staff – awesome! Thank you so much for feeding us all so well (even if you did offer me too many desserts, hahaha) The food, as always, was excellent.

Oh – I almost forgot – everywhereman Brett definitely does not have the world’s biggest top case. 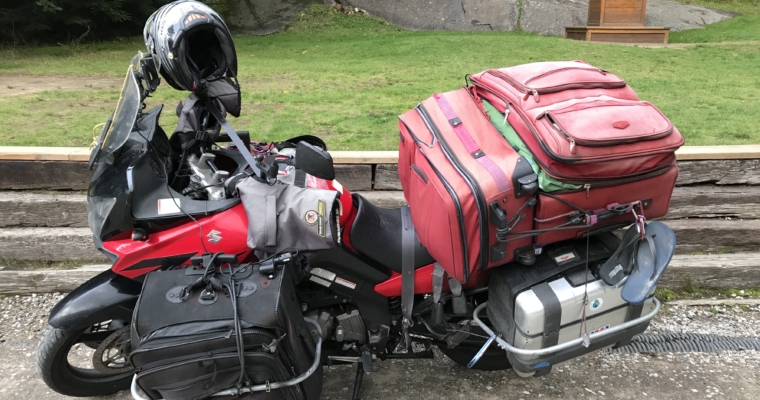 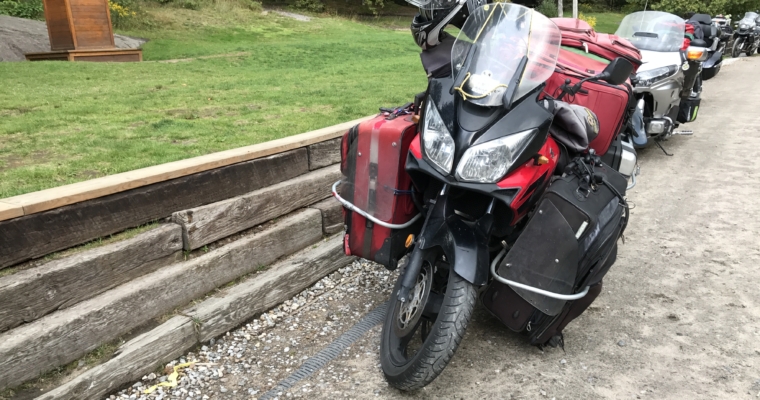 See you all again next year – and who knows, maybe Brett will add destination to everywhere, man.

As always, thank you for riding along.

I’ve been reading Brett’s “Everywhereman” blog and just came to the link to your page that he included in one of his posts. Of course, I had to click on the link and read your account of your meeting with Brett. I really enjoyed reading your well written article. You have a way with words that draw in the reader. Keep writing (and riding).

Thank you so much Pam, I truly appreciate you taking the time to leave kind words.
Thank you for reading and riding along!