I know it’s getting repetitive – but I slept like a log once again in my sleeping bag, situated beside a briskly flowing river that sang its babbling tune to me all night long.

Lorie and I ate a camp breakfast together and then we split up once again, Lorie heading off towards Prince Rupert, and me setting about changing my headlight bulb before hitting the road.

Thirty minutes later my task was completed and I stowed everything away. I was ready to hit the Yellowhead again and make my way to Prince Rupert. 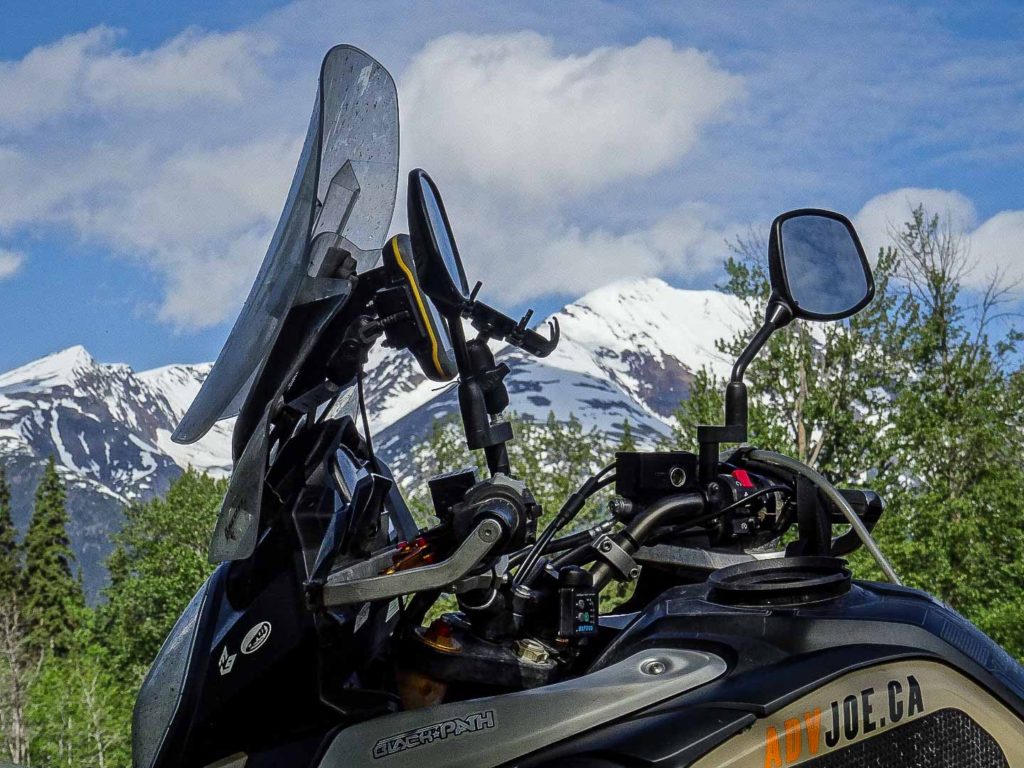 I rode through many small towns along the way. In Moricetown I met some some fellow adventure riders and stopped to chat for awhile.

Somewhere along the way I got back into the headspace for the ride that says “I am not on a schedule, I am on an adventure” and the whole world opened up to me again.

I started seeing the opportunities for a great picture that weren’t on anyone’s post cards or calendars; I became more open to what was being offered, and hung a left turn here, or a right turn there. 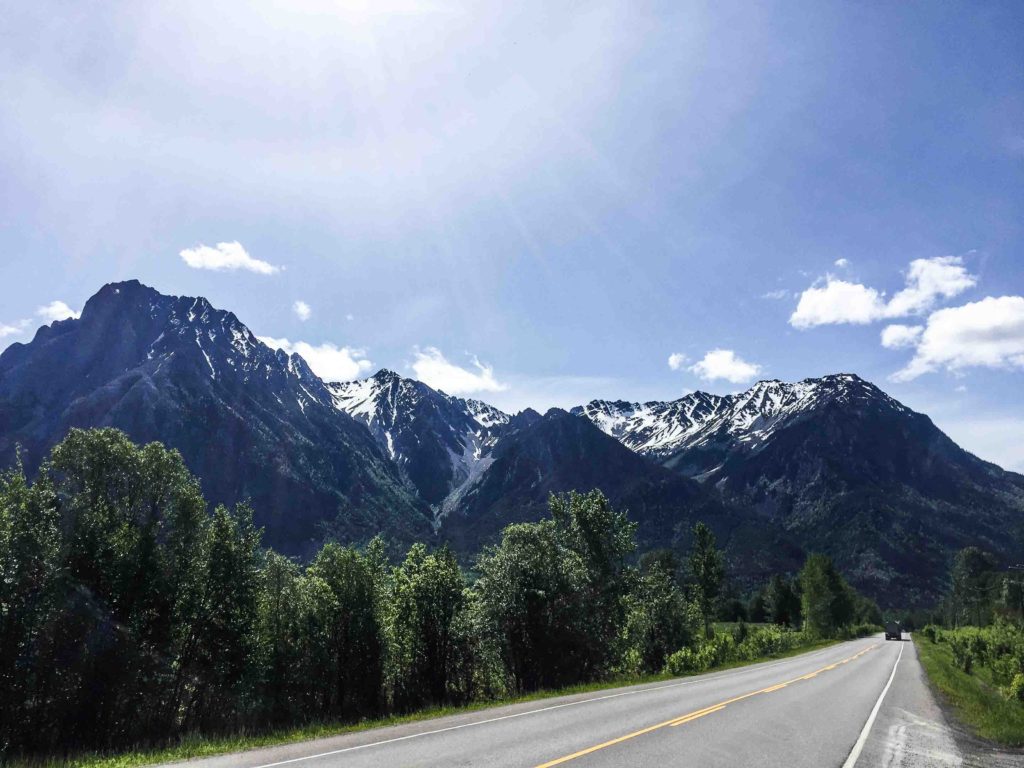 It truly did become zen-like. I was in each and every moment. All of my senses became heightened, most noticeably my sense of smell. The spruce, pine, and fir trees filling the air with a scent like an intoxicant that left me feeling euphoric.

Then down into lower elevations . Now deep thick roadside grasses and weeds filled the air with a green fragrant essence. It made me think of childhood days spent walking through meadows behind the house where I grew up, cicadas song laying the musical background track to my boyhood adventures. 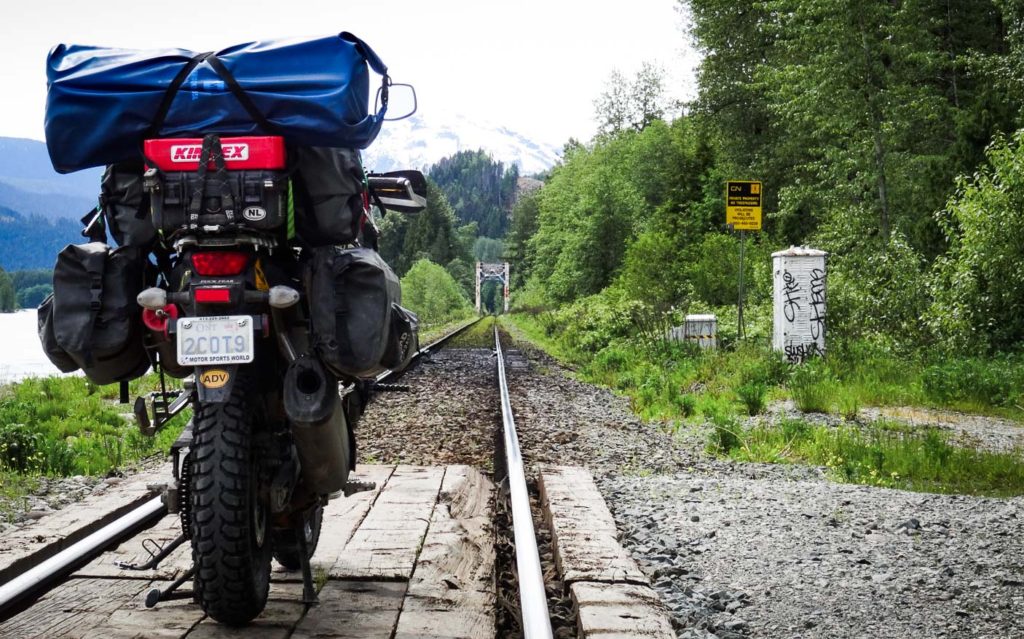 Riding along the highway, keeping pace with a freight train, cuing the engineer with a pump of my arm to blow the whistle, bringing a 12 year old’s smile widely across my face.

I was a child again. And in love with life – with my life – seeing through a child’s eyes, and with a childlike sense of wonder. 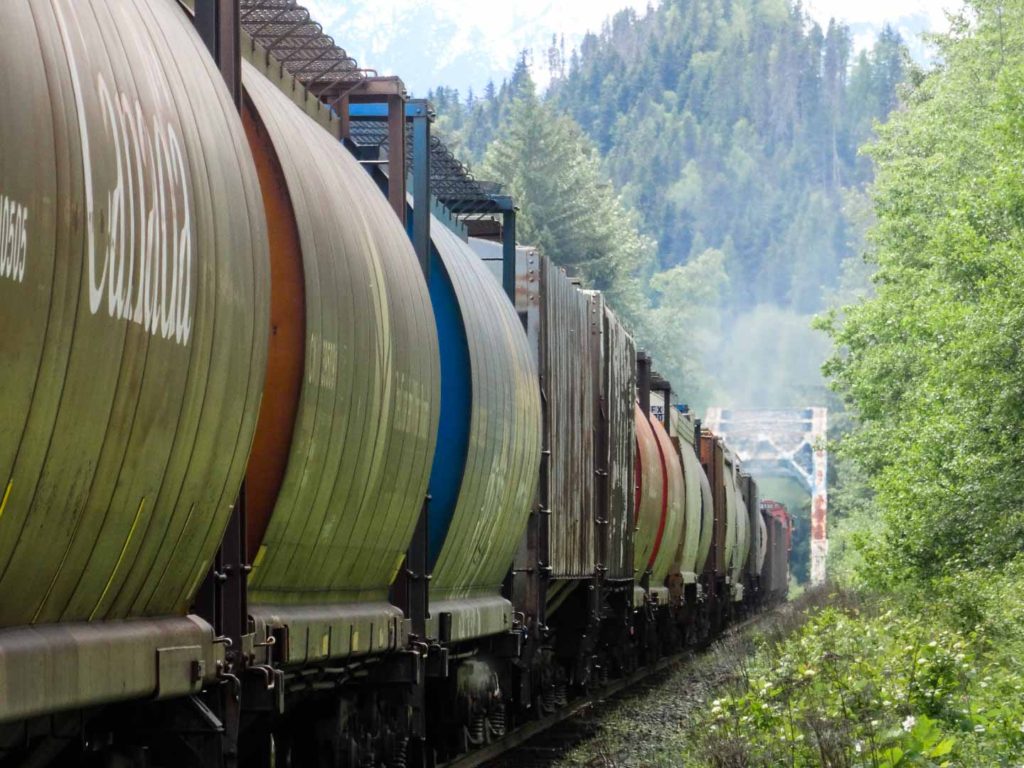 There is no drug, nor drink that ever gave me that. This is a high that is not only purely natural, but that comes from within – soul deep.

I have to wonder if this isn’t close to the experience that shamans, monks, and elders talk about. A kind of transcendence.

Maybe wondering about it means it’s not.

As I rode through and past Terrace, BC I saw a familiar form on a familiar bike approaching.

Theshnizzle and I waved as we passed in opposite directions, each following our own personal quest on a larger adventure.

I pulled into Prince Rupert a short time later. 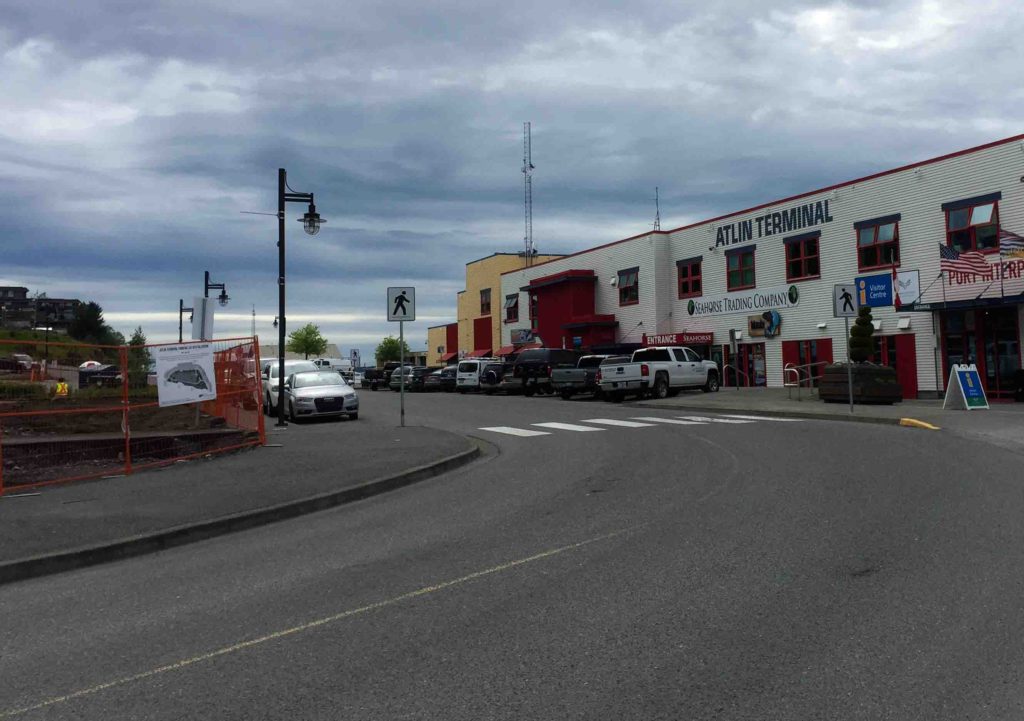 I wanted to get my boots into the Pacific, so I asked a couple of fellow riders where I might be able to do so and was directed back the way I had come – about 12 kilometers or so – to try at Ridley Island.

A polite and friendly security guard, almost sadly, told me that it just wasn’t possible to enter the secure compound of the AltaGas propane export terminal.

Feeling partially deflated, but not defeated, I continued to Port Edward, noting that Skeena drive seemed to come really close to the coast. I followed that wonderful little strip of asphalt deep into the forest along the spit, the bay – and the Pacific – so close, and yet still out of reach. I did, however, serendipitously come across the North Pacific Cannery, now a museum and a really interesting piece of local lore. 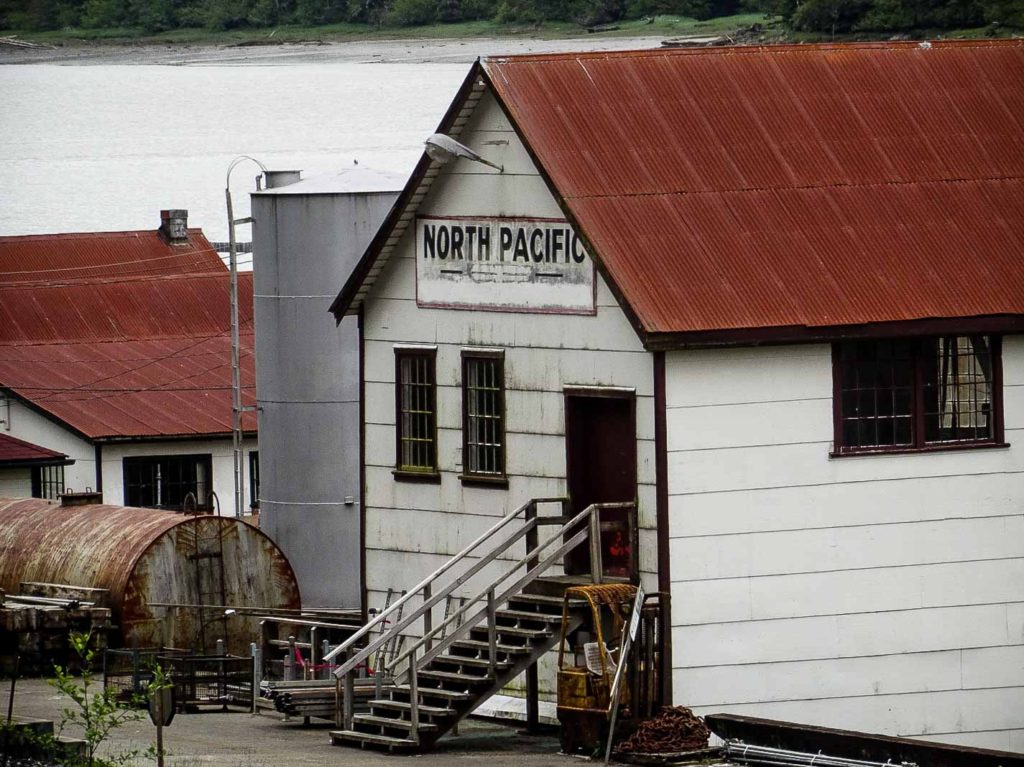 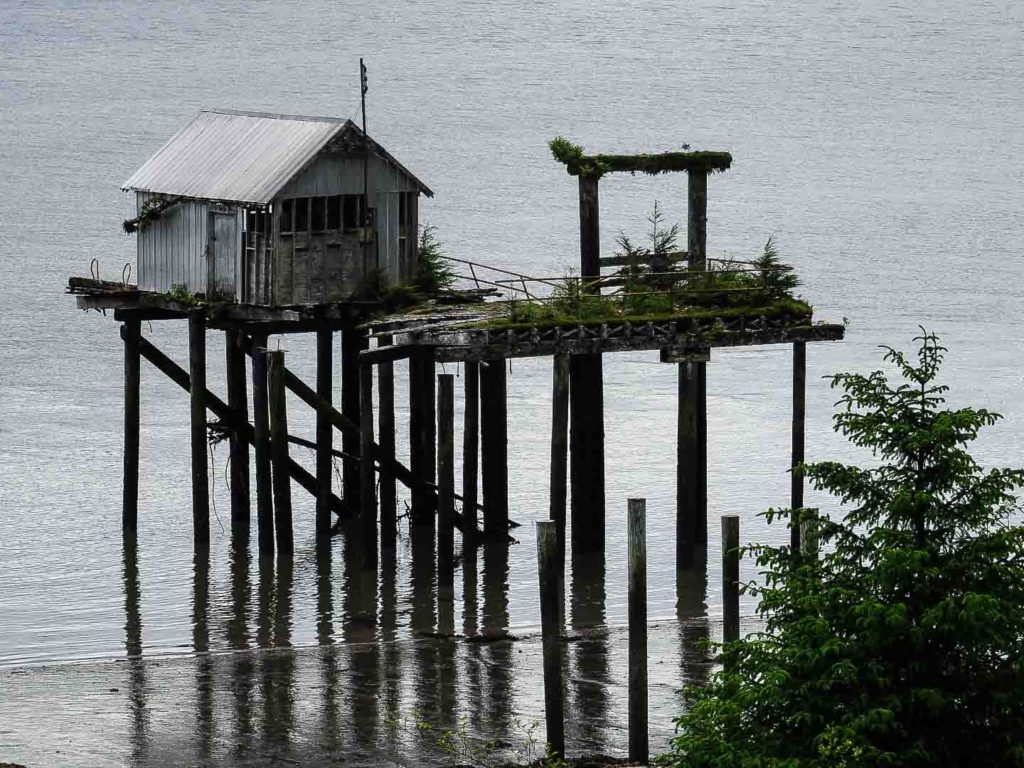 I enjoyed the moments as best I could, but honestly, I was still focused on getting my boots into the Pacific Ocean.

Now feeling somewhat defeated, I headed back into Prince Rupert and got a room at the Moby Dick Inn.

I spent about an hour on the computer in the lobby, which is where I typed up the last post that you read, and called it another wonderful, most-excellent day.

Up next – Boots in the Water, and Making Acquaintances In Stewart

My favorite post yet! The reason I finally got a bike this year. Still doing some local “training”. 🙂 Yesterday was a 370km ride from Ottawa to Gananoque via Morrisburg and following the St-Laurence Seaway. Leaving August 18 on a 5000km trek that will take me around Gaspésie, New Brunswick (All of the Eastern coast), Nova Scotia (Cabot Trail, Peggy’s Cove, Halifax), back up to Southern NB and heading West through the White Mountains before heading back to Ottawa. 🙂

Only 2500kms of experience so far and it is by far, the best “head clearing” tool/activity I have ever experienced!

Awesome! Talk about jumping in with both feet – well done Claude. You will absolutely love riding the east coast – the Cabot Trail is a beautiful ride.
I’ll be out that way in August as well ?
Thank you for dropping in and commenting man. Enjoy the ride.

I love that Zen feeling and have experienced I it on numerous occasions…most often when on my motorcycle. Geez…I wonder if there’s a connnection ?

Much like a kayaker finds that moment on the water, or a free-climber on a rock face, we find it on 2 wheels, the stars of our very own moments.
Thank you for continuing to ride along Bonnie.

Love the train pictures. The first time I went to the west coast I went by train. I only remember it in old photographs though – I was 3 at the time.

It was like I was drawn to the railroad crossing. There was a set of tracks behind my childhood home where my brother and I spent a lot of time as young boys, playing and exploring. The train coming by shortly after I stopped was a sequence in a perfect series of moments.

That last picture of the cannery is really special. It definitely evokes feelings and thoughts of what it might have been like, with people and boats, in its day. One of many photos that would make great jigsaw puzzles on line.
Definitely get the “on an adventure” attitude – the best

Hey thank you Sandy. That’s one of the most illustrative comments that I’ve received – I truly appreciate that!