Categories Menu
Home » BLOG » As one adventure ends, so another begins

As one adventure ends, so another begins 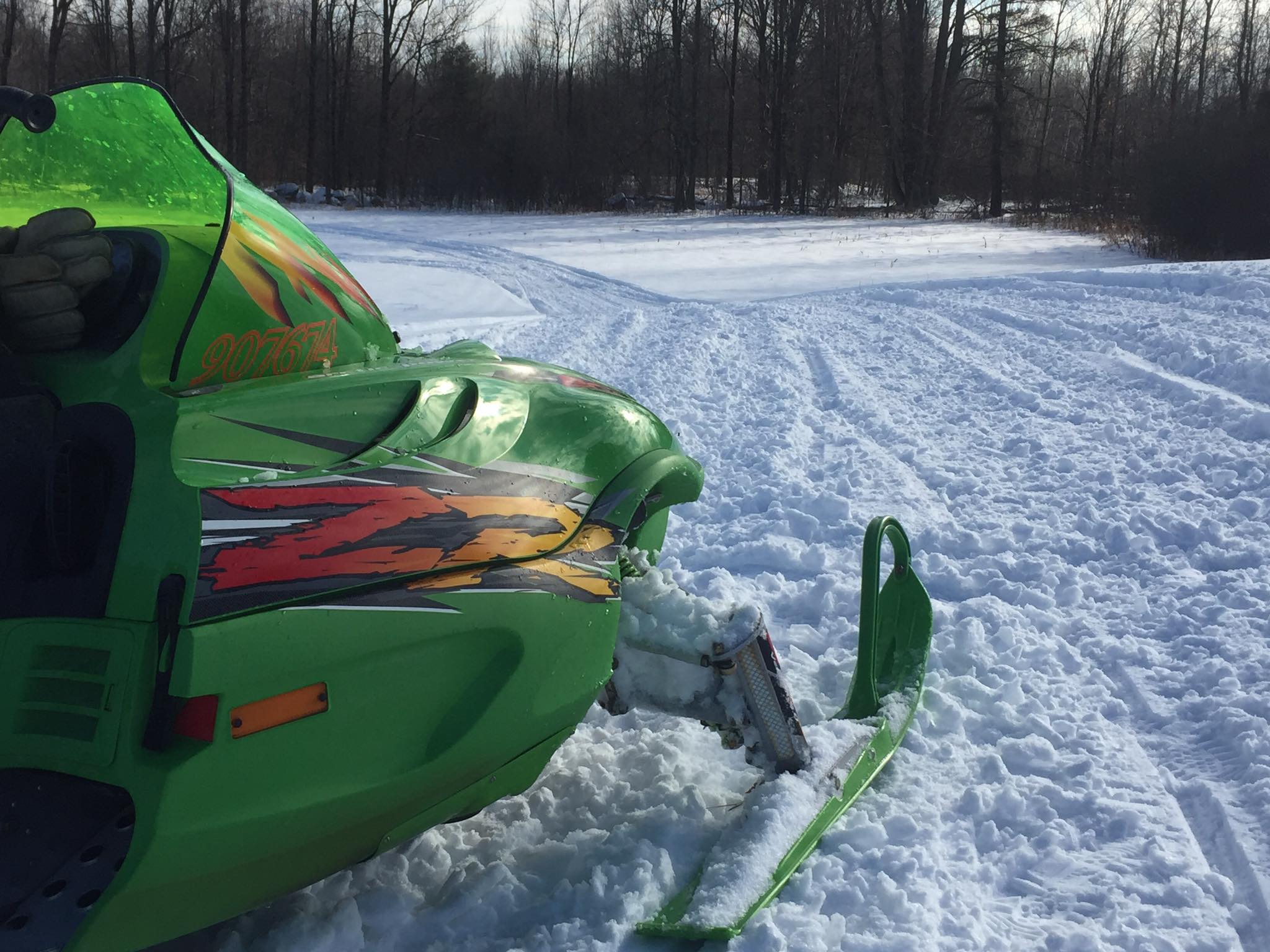 Back in December I wrote a post about my new adventure cure for the season of my discontent.

This winter I began an incredible exploration of Ontario’s snowmobile trails aboard a 2002 Arctic Cat ZR800.

The Big Cat at sunset

Even at 15 years old, this sled commands attention. No matter where I go, other riders will strike up a conversation about the mighty 800cc Cat.

No, she will not wheelie on demand. And she certainly will not break trail in fresh powder over 20cms deep without bogging down and getting stuck.

But get her out on the lake, or a packed trail and this a-little-long-in-the-tooth machine will gladly teach a few new dogs some old tricks. More than one rider on a gleaming 2017 sled is still making excuses, I am sure.

I spent the winter as I do the summer: riding with like minded people, enjoying the camaraderie that comes along with shared passions.

In the instance of my winter adventures, my riding partner has been my buddy John. I asked John in late November if I could store my new toy in his garage since he lives out in the country and right on the OFSC trail network.

John didn’t even own a sled at the time, but parking my sled in his garage planted the seed, and a few weeks of walking past my gleaming green machine was all it took to nurture that seed into a sled of his own.

A bit of searching the ‘net and a few hard-earned dollars later and John had a 500cc Ski Doo parked next to my ‘Cat.

The really cool part about all of this – John and I have been friends for many years, but with different interests we really never saw much of each other.

Over the last few months we have covered 3000 kilometers of snow together, as far away as the Abitibi Canyon in Northern Ontario, giggling like two little kids as we shared the excitement of a new-found passion. And our friendship has deepened because of it.

We started the season hanging out on the local trails by necessity. After all, it was not exactly the stellar sledding winter that was predicted – at least not in Eastern Ontario. Much of the OFSC trail network remained closed for a large chunk of the season, and in this area in particular the network relies on thick river and lake ice. If the ice is thin, the trails are closed.

So we explored around Perth, Smiths Falls, Carleton Place, Sharbot Lake and Arnprior. Getting out on day-long adventures, learning the local trail system and learning our machines. It took several hundred kilometers to understand that in general, the limitations were ours, not our machine’s.

As soon as we started to gain confidence and believe that it could be done, impediments like water crossings and mud-holes became part of the adventure instead of a place to turn around.

No need to turn around – it’s only mud

John and I discovered some of the beauty that exists in this part of Ontario that remains hidden until winter, when the snowmobile trails grant access to secrets unattainable in all but the winter months. Sadly, there are riders out there that abuse the privilege of riding on private property, and we lose more and more trail access each year. I will undoubtedly rant about that in a later post.

Abandoned, but not forgotten

As the winter grew long we both became more and more interested in taking a sledding vacation. John sent me a text one evening asking what I thought about heading up to Cochrane, and then maybe Shining Tree.

The very next week we loaded up our sleds and hit the road. Our first night was in Kirkland Lake, then we drove on up to Smooth Rock Falls where we staged for 3 epic days of riding, the pinnacle being a 330 kilometer rip from The Moose Motel in Smooth Rock Falls down to Cochrane and then up to Abitibi Canyon and back to The Moose.

Sometimes you just have to stop and stare

We met a bunch of great people, rode on some of the most incredible snowmobile trails to be found anywhere, paid $3.00/litre for fuel, ate a $10 bowl of chili and even though we lost the brakes on the ½ ton on the way home it was a wicked good time. Hell, losing the brakes on highway 11 in Matheson Ontario was just another part of the adventure.

I want to give a shout-out to Harley Phibbs who hooked the trailer with my sled on it to his ¾ ton and drove me and my ‘cat to Kirkland Lake while John rode with his roadside assistance flat bed driver.

And then, just when we thought the season had ended, Mother Nature decided to drop another 15 centimeters of snow on the Ottawa valley this past Thursday. There was only one series of trails open in the entire province below Kirkland Lake: Pembroke west to Madawaska.

So Saturday morning we loaded up, drove to Pembroke, offloaded at the Irving’s Truck Stop and got in one last adventure for the season. The weather was warm and sunny, the trails were in decent shape considering, and 290 kilometers was added to the odometer.

From the look out near Spectacle Lake Lodge

Great trails and conditions for the last ride of the season

John and I agree that this will be a must-do ride next season after a decent snowfall – the trails up around Barry’s Bay and Madawaska are really, really nice.

For now though, the season has come to an end. Our sleds are parked, and over the next few weeks we will perform end-of-season maintenance and properly store our sleds for the summer.

I will get my bikes out and begin what is going to be a life-changing chapter in my life.

All the while, thinking about the winter to come. . .

I really miss snowmobiling. Hopefully with the pending move to the snow belt I’ll be back on a sled soon enough. In the meantime it’s 2 wheel freedom

They are distinctly different, yet at the same time very similar passions. Both pursuits lead us into some amazing adventures, . . .like Abitibi Canyon, haha

Envious! It’s been 25 years since I owned a sled.

Keep your eyes on the ‘for sale’ ads this summer James – there are deals to be had!

There’s a bed, meals and trails for you here in Halifax if you need a place to crash during your trip!

Author
AdvJoe
Reply to  Jake B

Awesome Jake!
Thanks brother – I will definitely take you up on that.

And through out this season’s adventures neither of us had a break down that left us out on a trail. You never really knew exactly where you were at most times. I give credit to the power of prayer. As I looked to my higher power this morning as we were just getting started at 6am Joe stopped me and asked if I had lost an idler wheel as he just ran it over. Sure enough but I made it home without. Or the trip where I was stuck on a wooden bridge crossing. My duel carbide on my skis… Read more »

Hey thank you too John.
I am already eager for the Gaspé ride next winter. For now it’s atv’s and adventure bikes brother.