Hacienda Cusin to the Caskafessu, Mindo 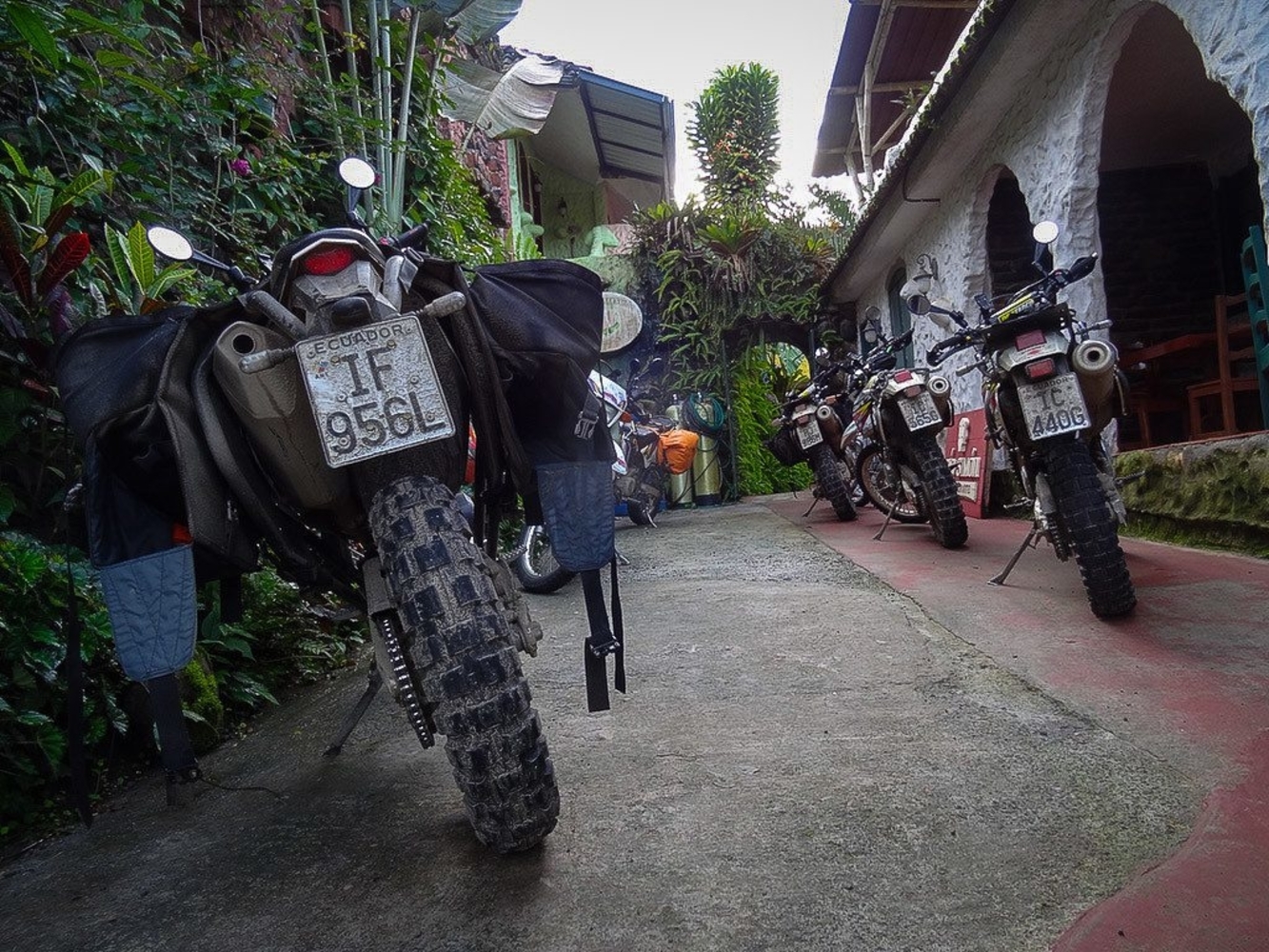 As I mentioned at the close of the last post, the morning brought a whole new sense of wonder. The first thing that I noticed as I awoke was the raucous clamour of birds flowing in through my open windows.

I got up, showered and brushed my teeth, and looked outside at the world into which we had rode our motorcycles under cover of darkness the evening before.

There was a heaviness to the air – it had rained overnight – and it felt like it could start again at any time.

I mention this only because even with the weightiness of the air, the scenery into which I wandered left me feeling so very, very happy. 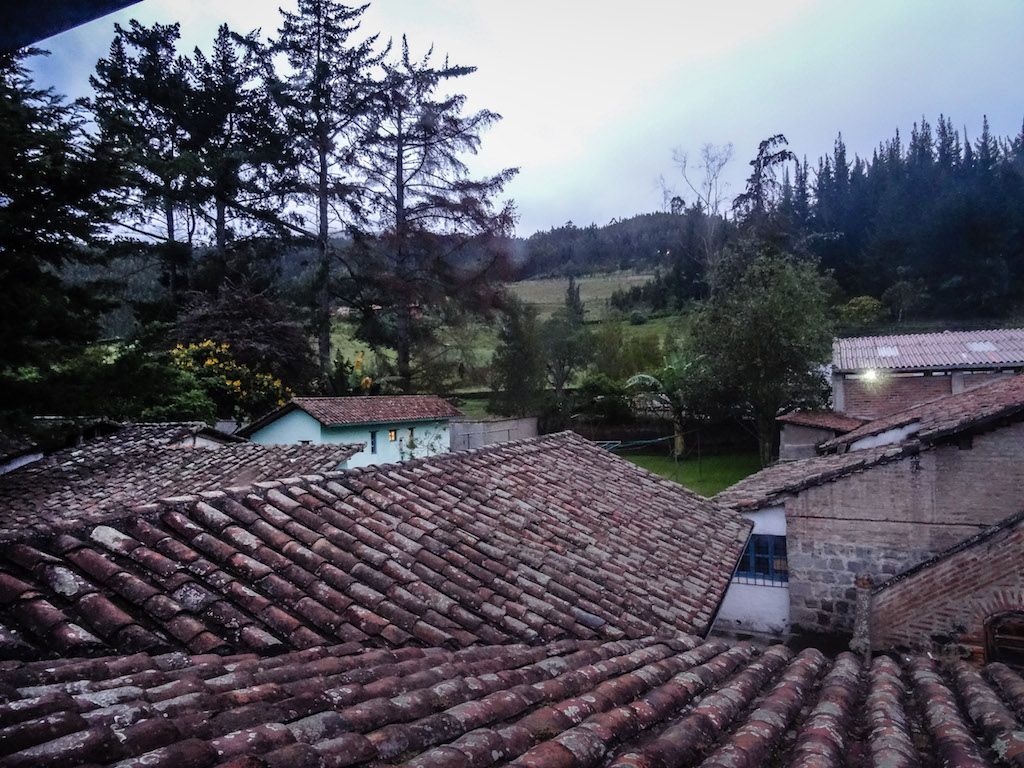 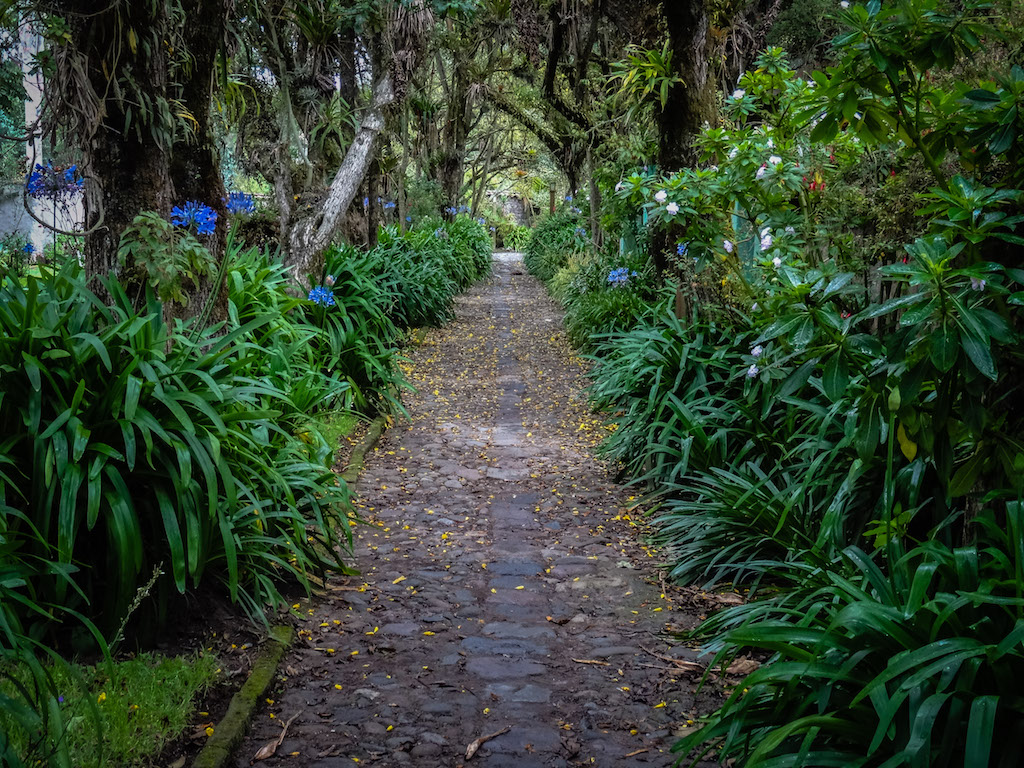 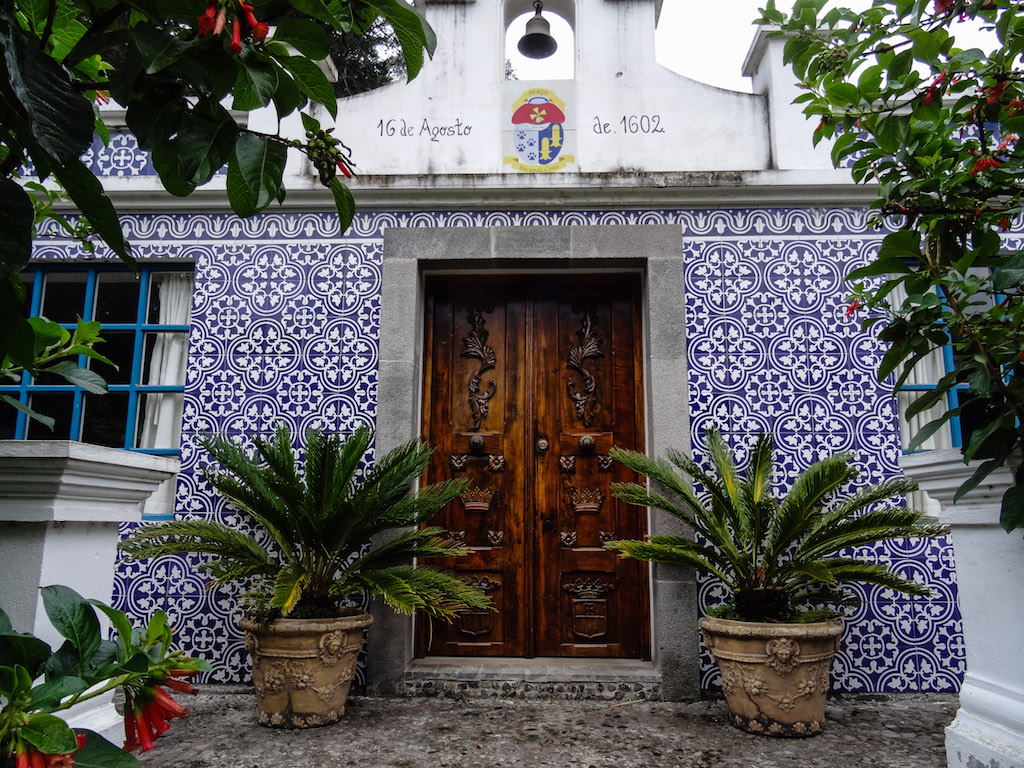 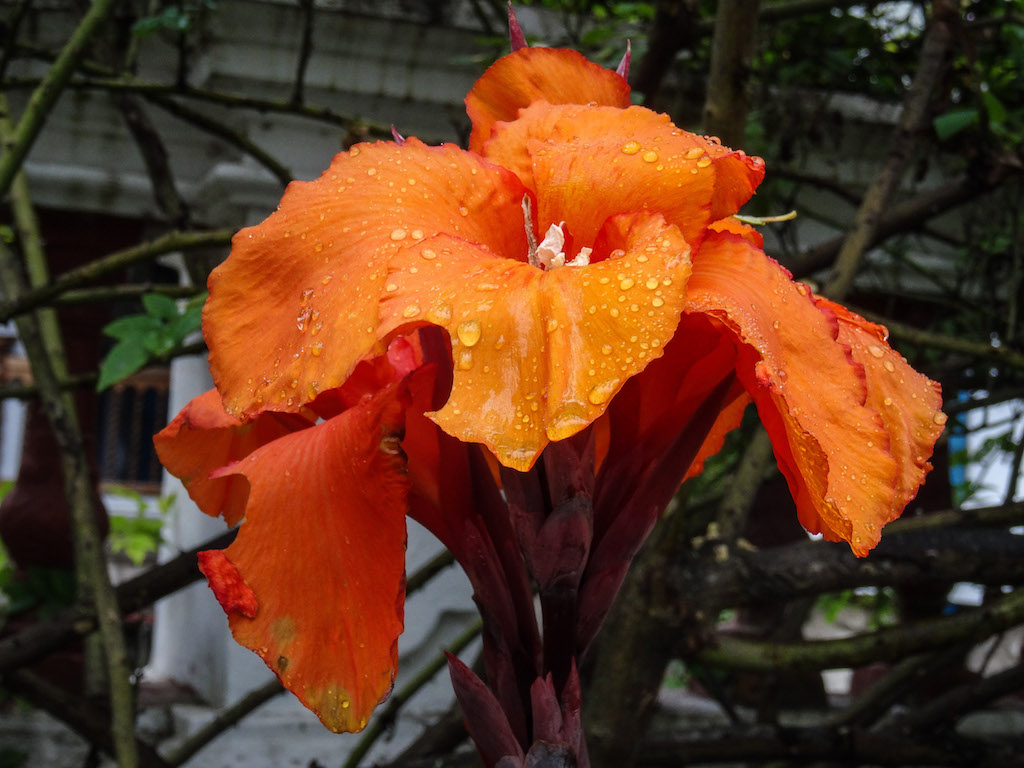 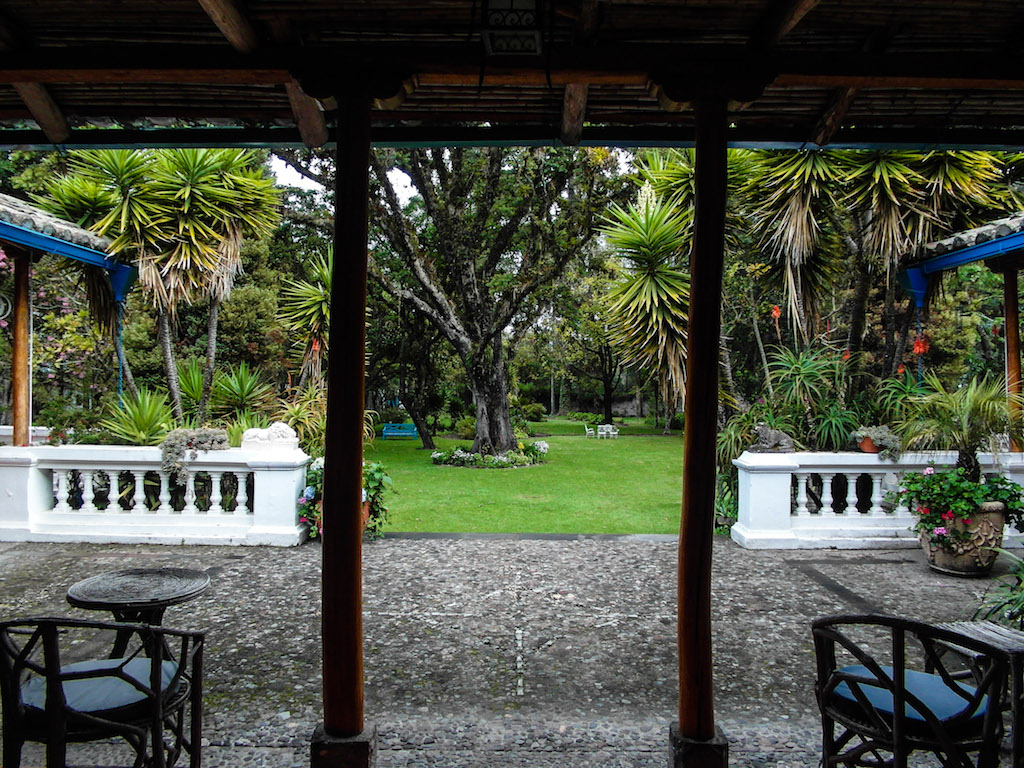 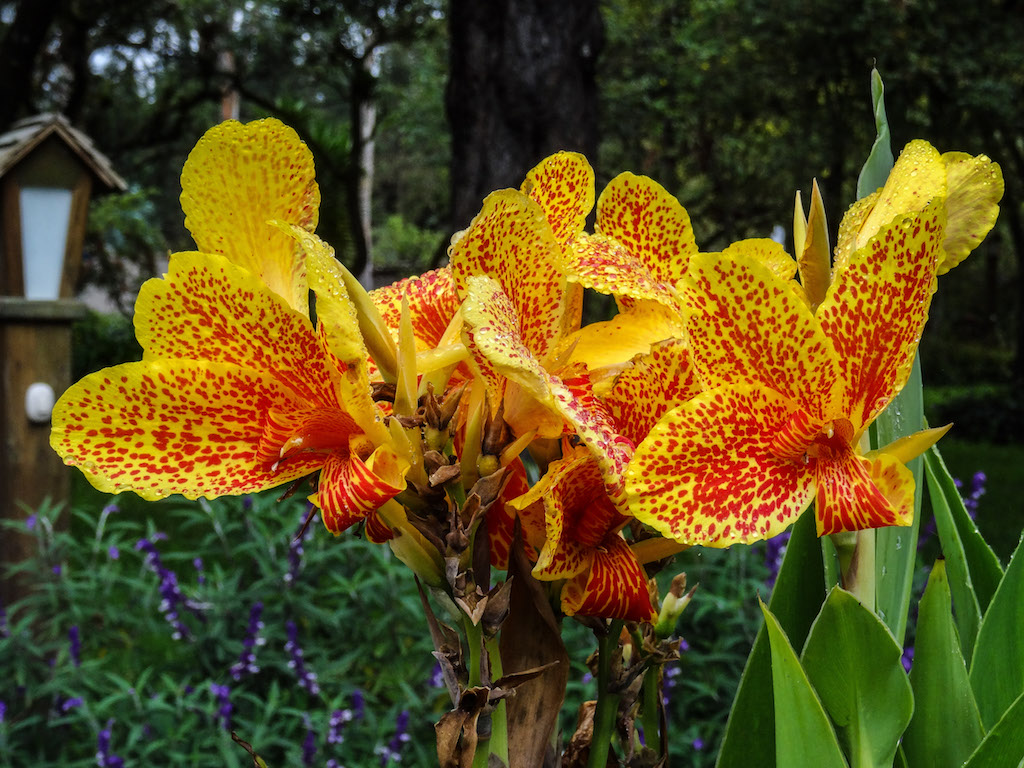 The Hacienda Cusin hotel is a restored estate with a monastery dating back to the 17th century. And all of it is simply beautiful. I found myself wishing that we had a full day to explore the entire property. However, I made do with a 15 minute walk through the gardens before joining the guys for breakfast.

After eating more delicious eggs and fresh fruit with some yogurt and granola, we headed to our rooms to get our gear together and pack our bikes.

As I made my way to my bike with my Giant Loop luggage over my shoulder, I noticed Flash and the Indian Adventure rider were already suited up, bikes running.

“Yeah, we’re gonna go ahead and take-off, instead of waiting around while you guys get ready.”

Not a question, but a statement.”Ok then, see you guys later” was all that I could think of to say.

Apparently the idea of a six-man group ride was now completely out the window.

Again, I mention this only to serve as a reminder that if you are going to embark on a tour like this, especially with riders that you have never met before, take the time to make sure that everyone has at least agreed upon the what-if’s – and be ready for the differences in riding style, demeanor and personality. These things, when left unexamined, have the ability to sour the experience. Fortunately for us, we were able to agree to meet up at each day’s lunch spot, or at the very least the end-of-day lodgings for coffee’s and a rehash of the days ride.

And so it was that on the second morning of the ride we found ourselves going forward as two separate groups – 2 men in one, and 4 in the other.

Yun, Roger, David and I got ourselves all geared up, did a last-minute social-media check-in, and hit the road.

It was to be a pretty long day.

We rode out of San Pablo del Lago and made our way to the first waypoint of the day, the artisans market at Plaza de los Ponchos.

We stopped here to immerse ourselves in the bustle of daily life that attracts people – native and tourist alike – from all over the country and the world. A truly immersive experience, bartering here is expected, and part of the experience. David managed to get an excellent deal on a couple of handmade alpaca hats, and I found a beautiful silver bracelet that I picked up for my friend Susie, as well as a nice pocket knife for myself. There is definitely something for everyone in this tightly packed, colorful and busy square.

There are also many artisanal shops along both sides of the main streets surrounding the square, with local shopkeepers happy to show you their wares. 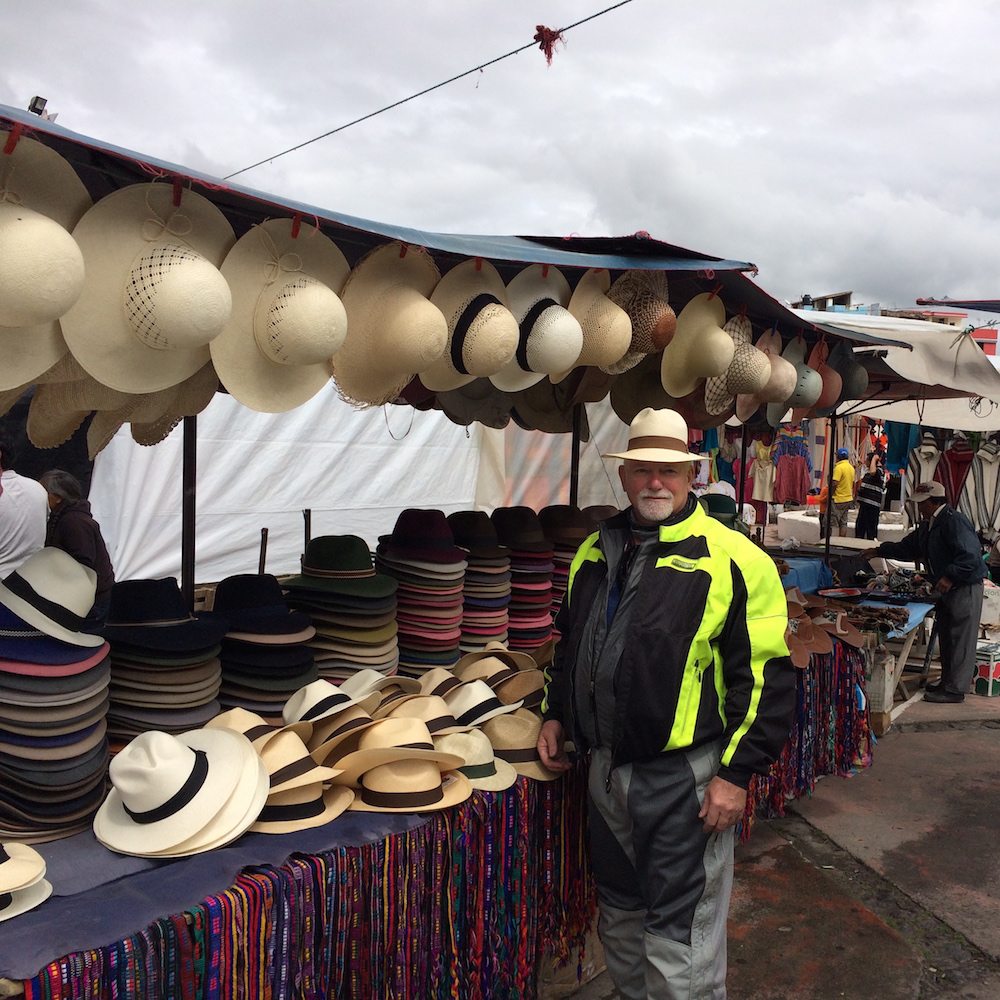 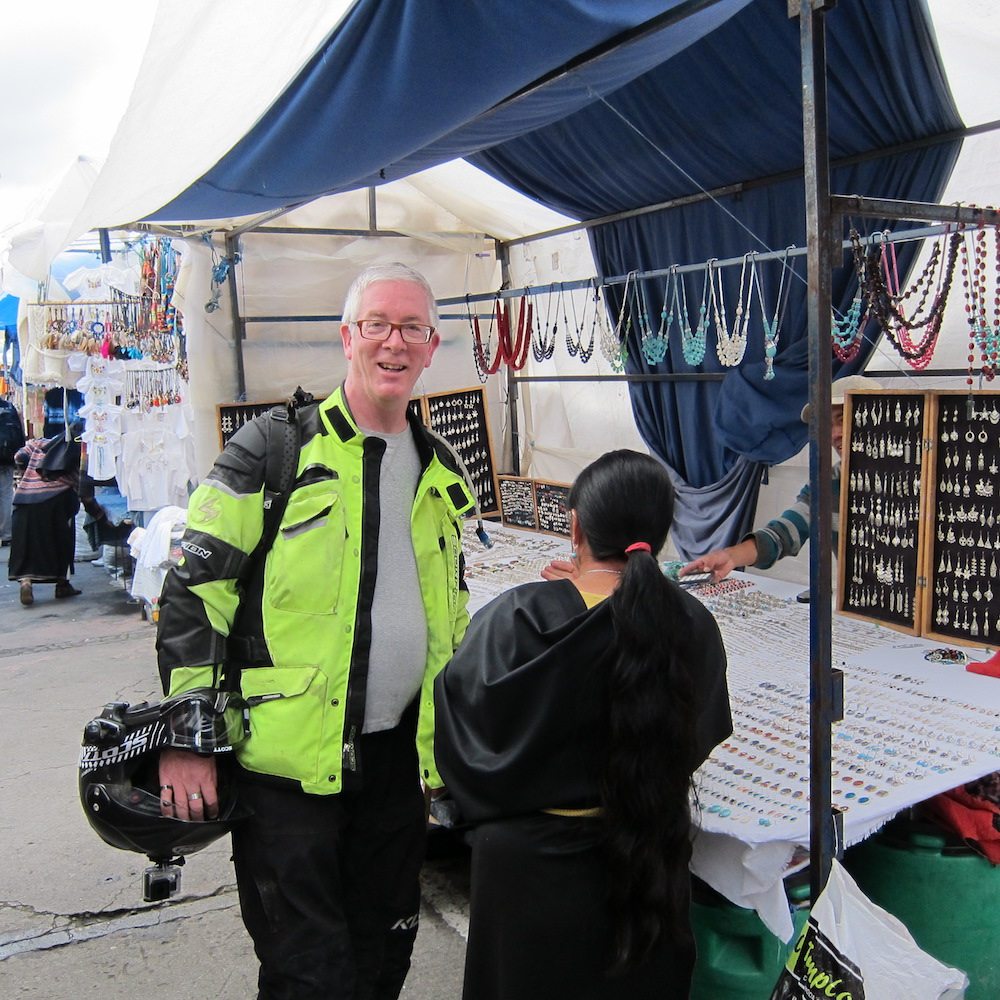 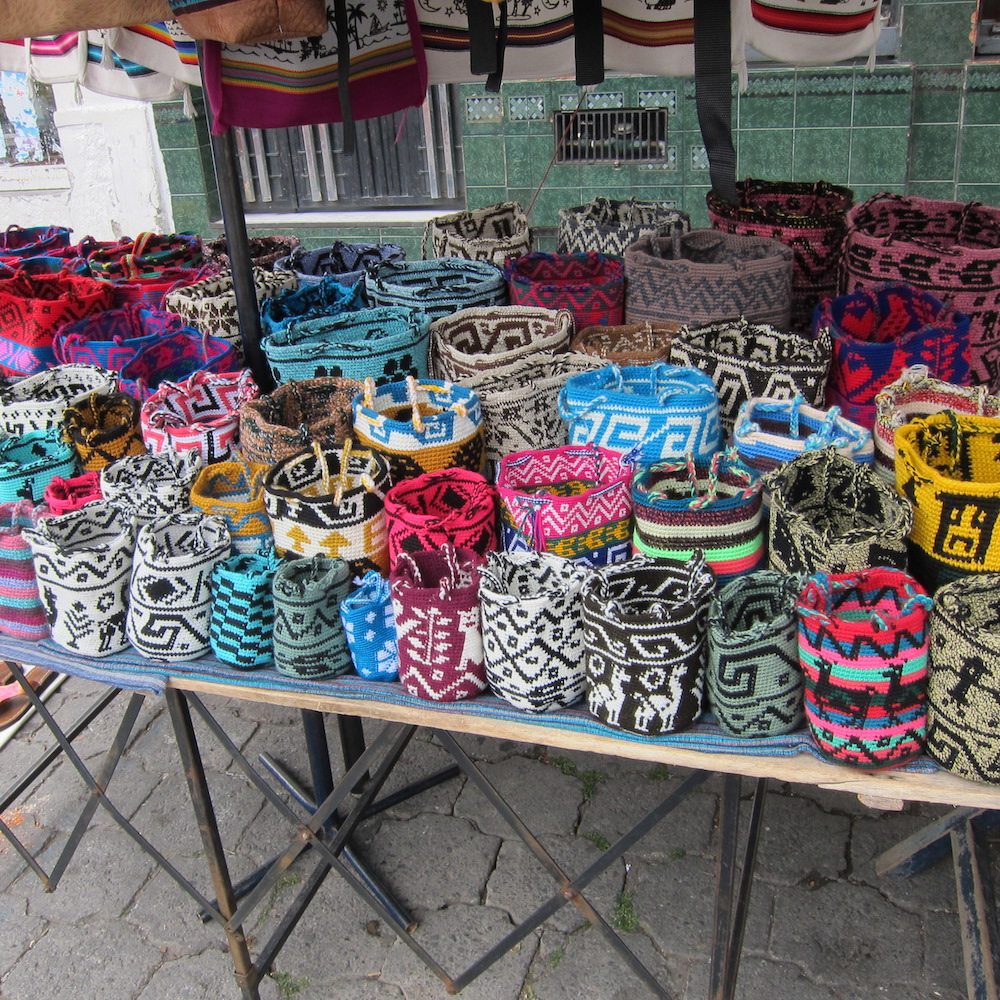 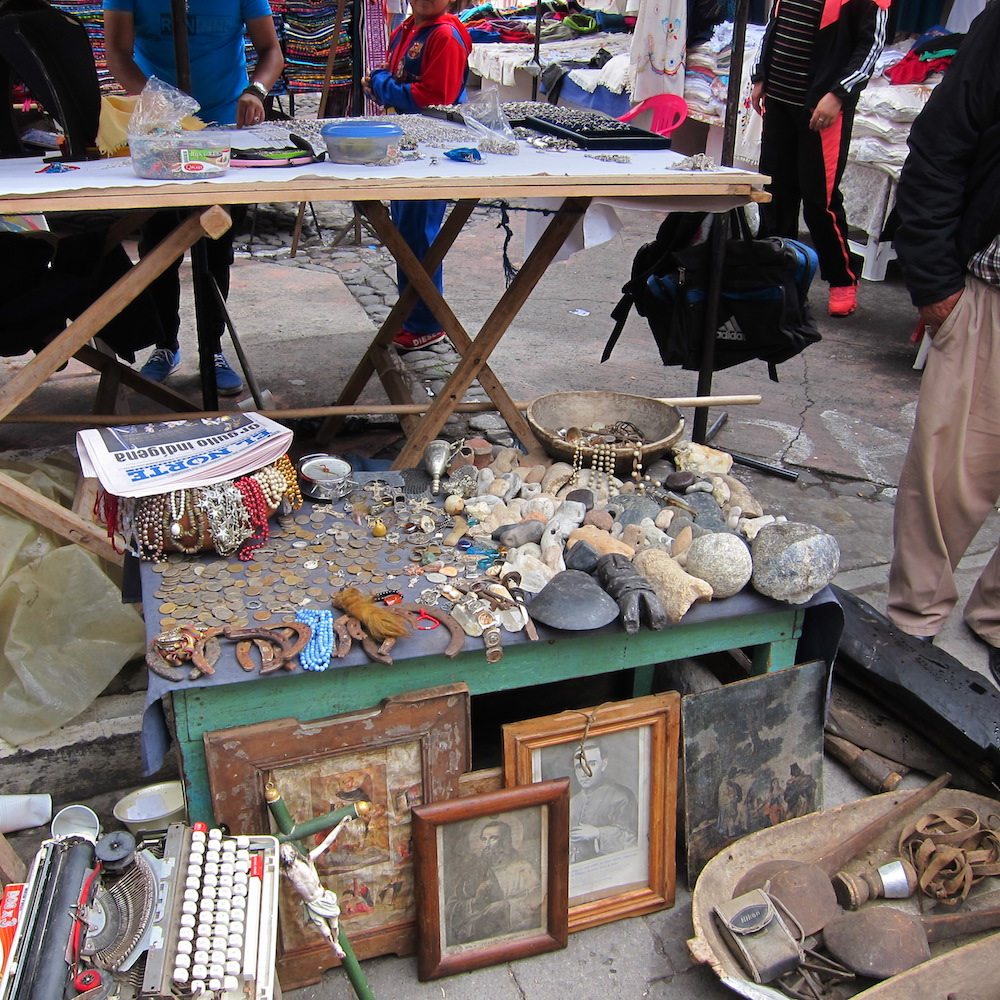 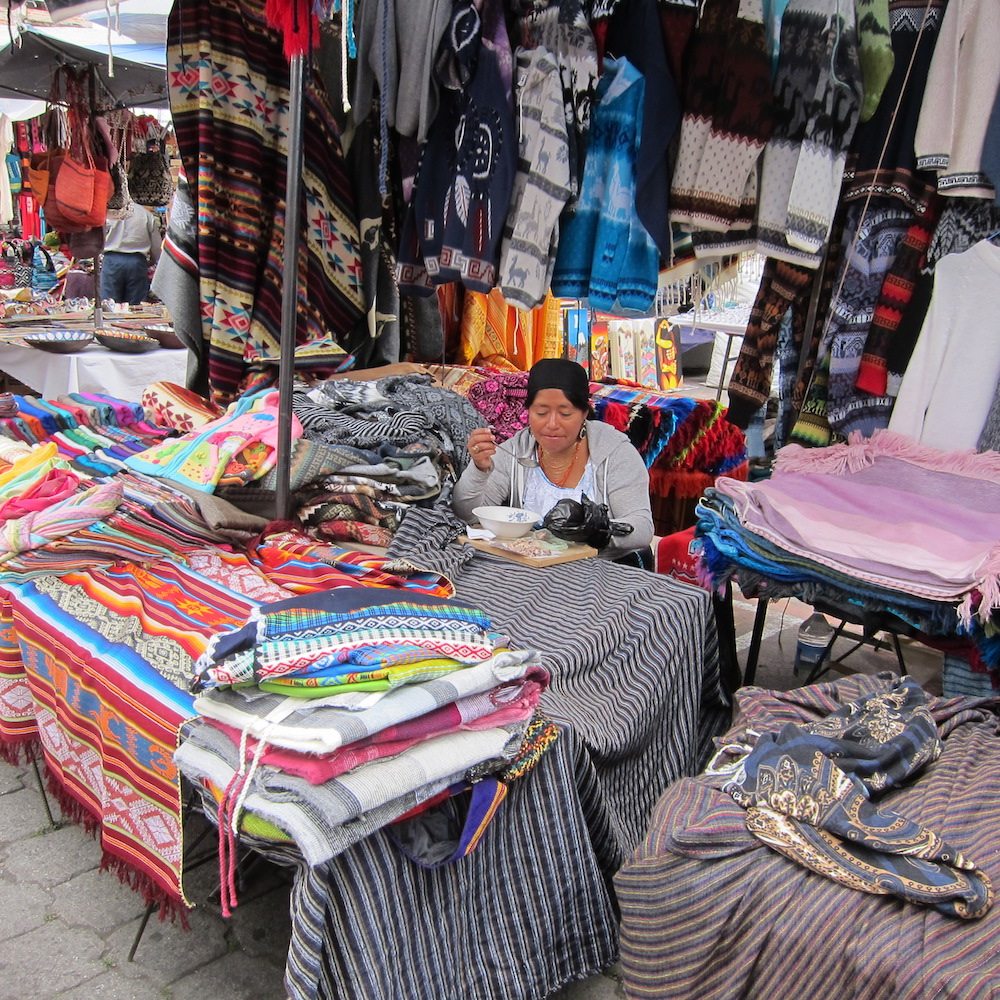 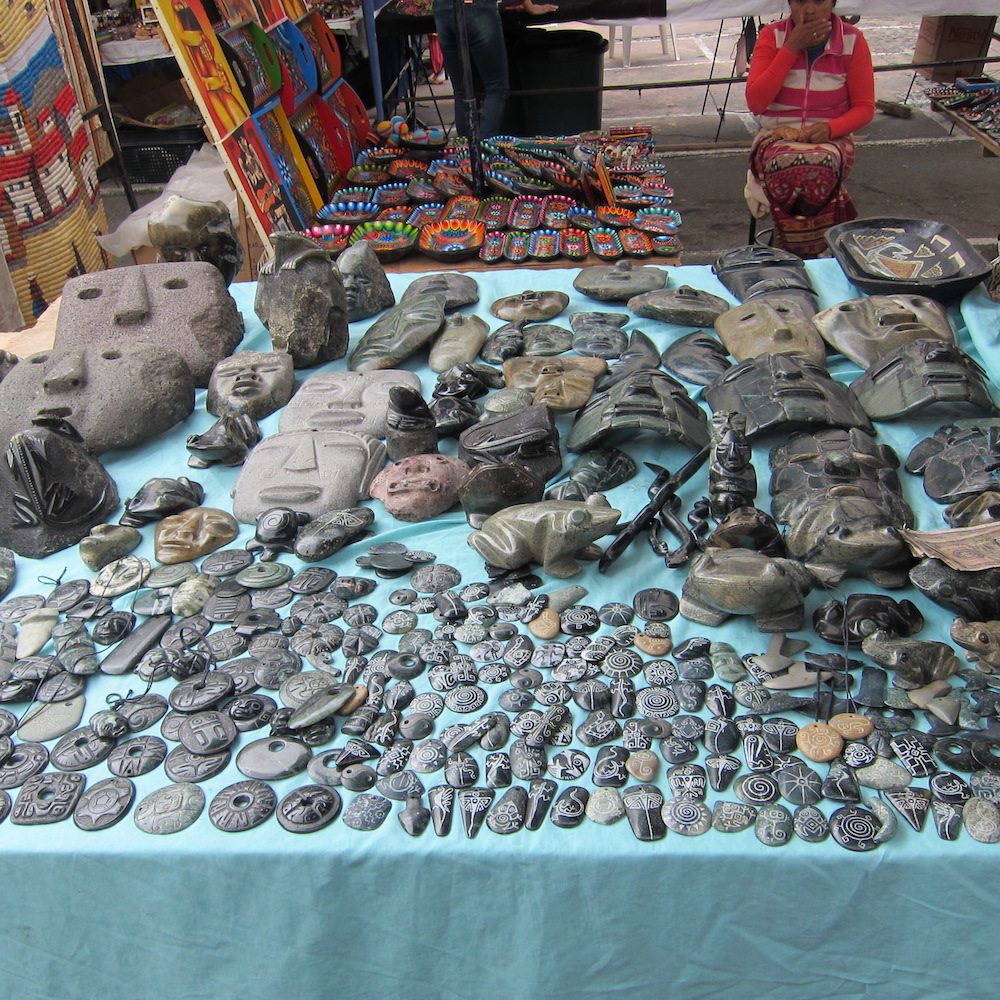 After leaving the market we made our way back into the mountains, heading for our next stop, Lake Cuicocha. We stopped along the way at a lookout, taking the opportunity to grab a couple of pictures of the sprawling valley below, and it was here that our two other riders happened to spot our bikes as they went zipping by in the other direction. It seems that Flash and Indiana had already been up to the lake and were now making their way on towards the next stop, Apuela. We all chatted for a few minutes, comparing notes about the ride to this point, and then carried on in our separate directions. 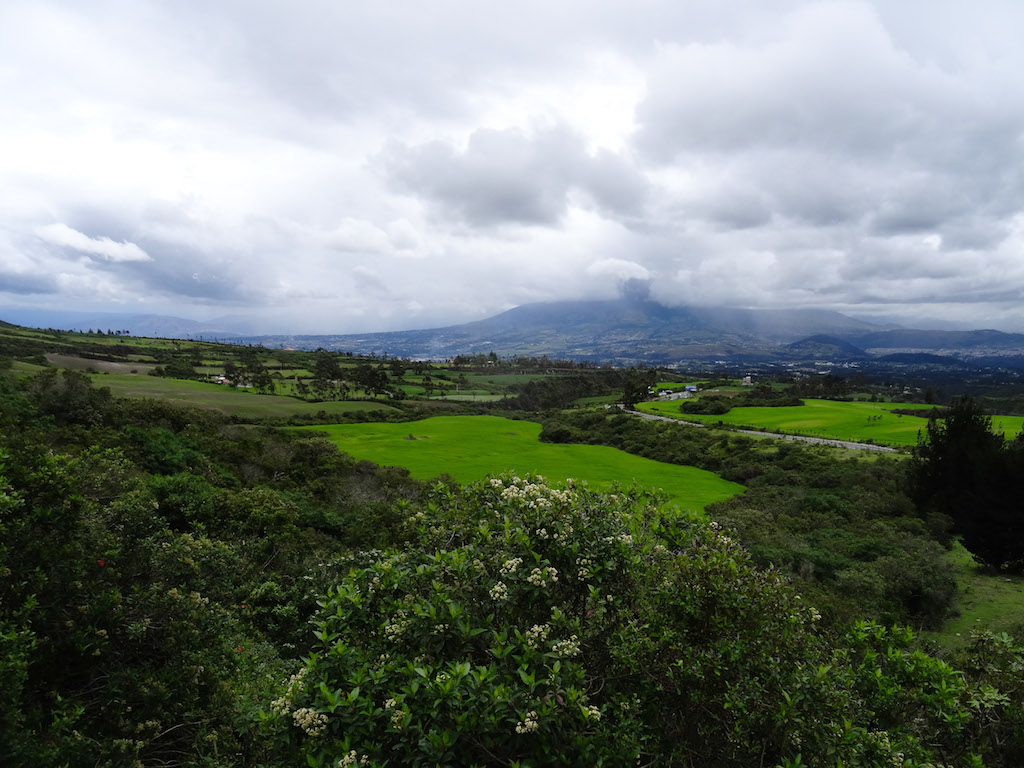 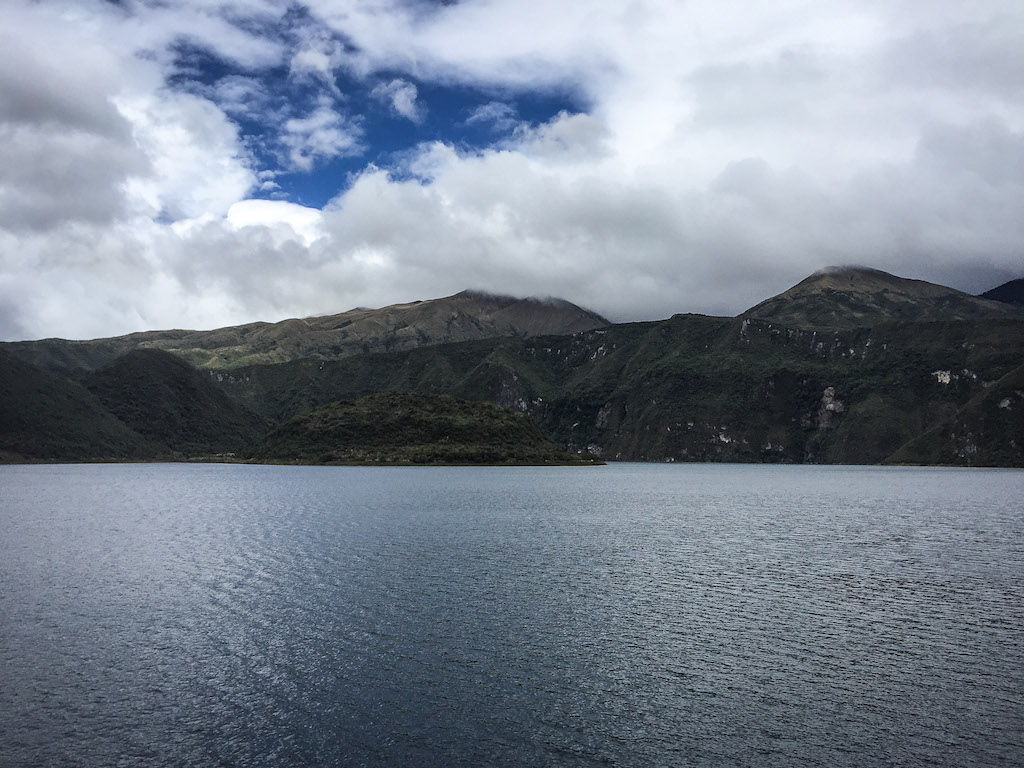 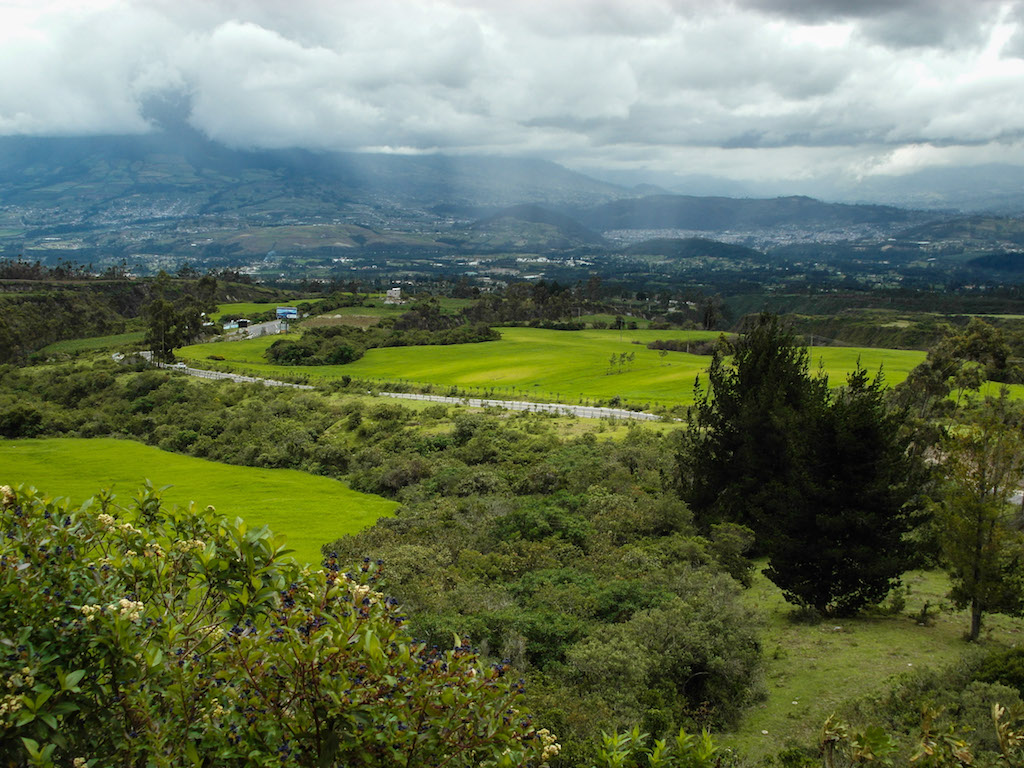 It would later turn out that Flash and Indiana had missed a truly awesome off-road option between Lake Cuicocha and Apuela, however they certainly had adventures of their own.

The lake sits in a large national park, and the literal translation is Guinea Pig Lake, so named for the guinea pig shaped island in the middle of the lake. There is a large restaurant down at the lakeshore, and yes, prominently on the menu is cuy, or guinea pig. 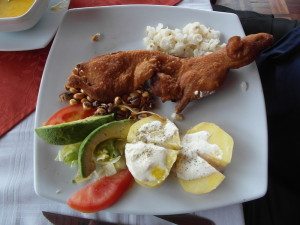 David, our ever-intrepid adventurous eater, ordered the national delicacy and we all took turns sampling it. And yes, it is true – it tastes a lot like chicken!

Court had mentioned to all of us before we left that, if we were so inclined (and if the road was not washed out) there was a really fun and challenging dirt mountain road leading from the lake to the next town – Apuela.

I asked the park employee at the gate house if the road was in fact open, and he gestured to my bike, smiling widely and saying “si el camino esta abierto” which I took to mean “yes, and you’re gonna love it!”

It was. And we did. What a ride, snaking up into the Andes again on what amounted to not much more than a goat path in places.

Before too long this little road gave way to more really nice new asphalt, and we once again began a descent to the valley below. Stopping once again along the way to snap a few more pictures, Yun and I spotted the exact same thing at the exact same time. Far across the valley, leading from the valley floor up into the clouds was a sandy-looking dirt road that was definitely not on our itinerary.

A quick nod to eachother and it was a done deal – Yun and I were going to go ride that road!

David and Roger wanted nothing to do with it, opting instead to use rational critical thinking: the tour operator had already mentioned that we were embarking on the most difficult tour in the line-up, and doing so without a guide. If that road was not on the route, there had to be a reason. Likely attached to important things like life, limb and the ability to see our loved ones again.

Yun and I engaged no such thought processes, instead seeing only a road that must be ridden. 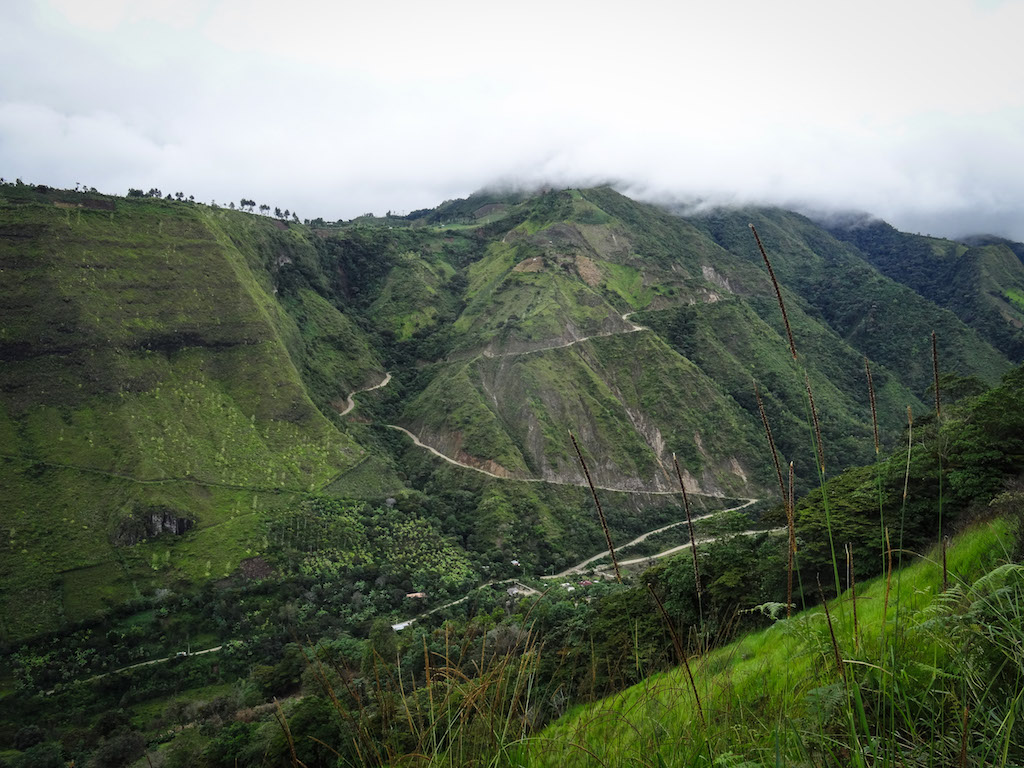 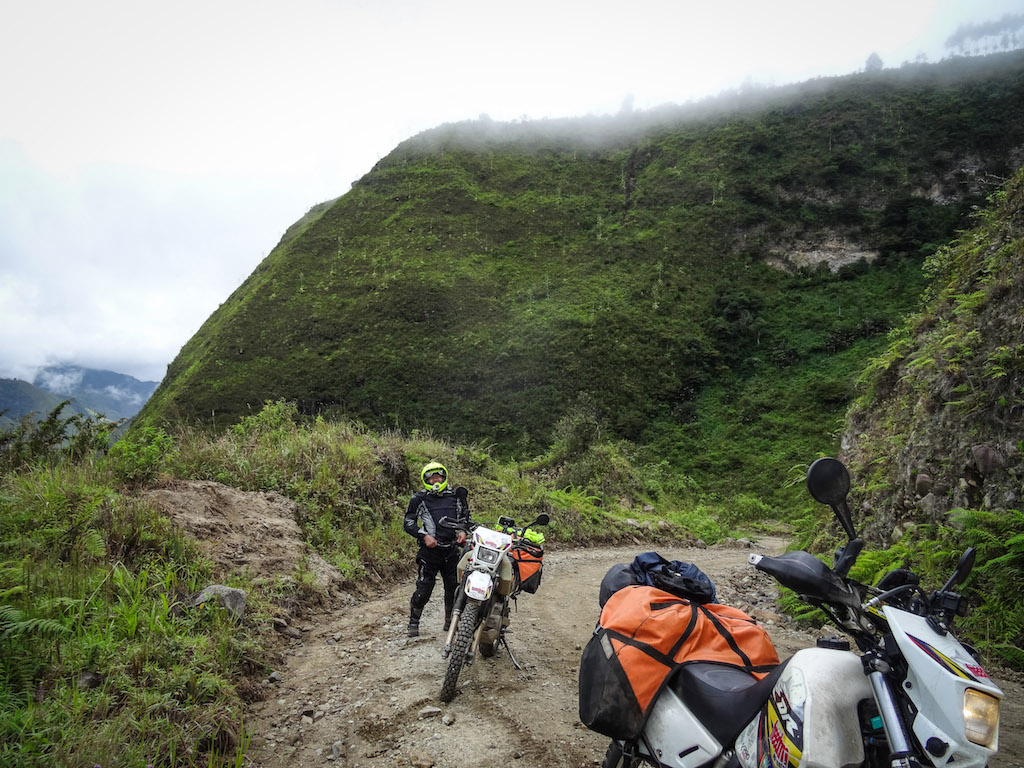 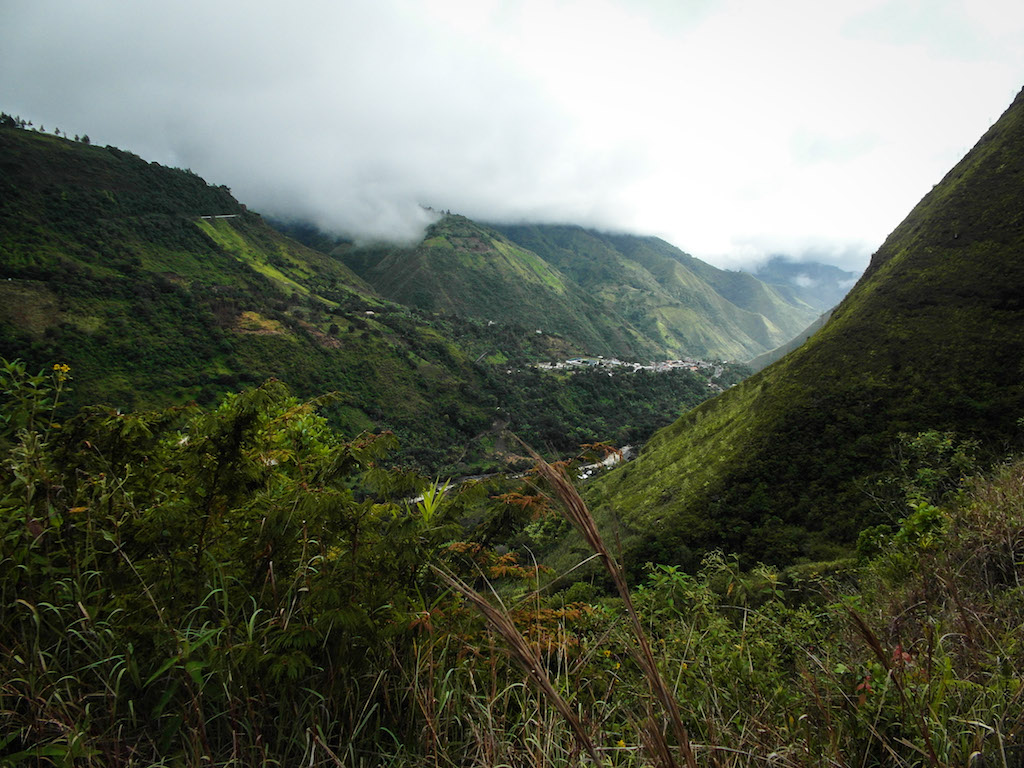 All told our little side adventure probably cost us an hour – but given the opportunity to do it again I know Yun and I would do it exactly the same way. Quite steep, and often a mix of pea-gravel, soft sand and big rocks, that little mountain road demanded all of our attention and left us smiling ear-to-ear once we got to the top. The only thing left to do then was turn around and ride back down! 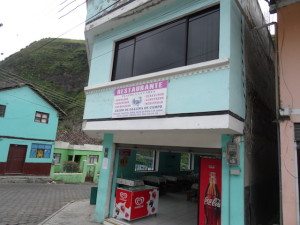 We met up with Roger and David in Apuela at a small café, and also met an expat named David who, along with his wife had relocated from the mid-western USA 4 years prior. He was in the process of building the home of his dreams on a large plot of land that he had purchased just outside of town, and I am not even going to mention the cost of the land, nor the expected cost of his 3 story home. Suffice to say that you would not believe it if I did.

We lingered in town a little longer than we probably should have, enjoying some coffee and chatting with some other adventure travelers. By the time that we saddled up to leave it was after 4:00pm, and we had been advised by the tour operator that we needed to be well on our way by noon if we were to keep to the schedule . . .

So, we made a couple of adjustments, opting to skip the next 2 waypoints on the GPS and head directly for that evening’s lodgings, the Caskafessu Hotel in Mindo.

Needless to say we came to learn why Court insisted so strongly that we adhere to the schedule as it was laid out for us.

We were faced with some amazing mountain off-road riding, and each of us was truly enjoying the ride, but it was long and over difficult terrain. By nightfall it had started to rain again – and we were not entirely sure of how much farther we had to ride – so we just kept on plugging away, dirt road to asphalt, asphalt to cobblestone, cobblestone to rocky mountain trail.

By the time that it was full-dark we were riding through the dense jungle that surrounds the Bellavista Cloud Forest Reserve. Truly in the depths of the Andean jungle, navigating by the meager light thrown by our DR650’s in a steady downpour, this was dangerous riding. We were all exhausted, not to mention hungry, and our bodies were feeling the fatigue. Trying to keep a good pace so as to arrive at our destination still in time to get some dinner, I am still thankful, and not a little surprised, that we all made it through that section of the ride without a mishap.

I would love to see what that area looks like in daylight. I have to tell you, it was creepy as hell at night and in the rain!

We finally rode out of the jungle, and onto some pristine asphalt, between 7:30 and 8:00 pm, and made a bee-line for the Caskafessu Hotel in Mindo. Arriving at around 8:20, we were all very happy to park the bikes, unload our gear and get into a nice hot shower. Flash and Indiana had been at the hotel for a couple of hours at that point, and we were all very glad to see that all had made it with no real problems.

A large bowl of home-made chili-con-carne, freshly baked bread and a hot cup of coffee topped the day off in spectacular fashion. 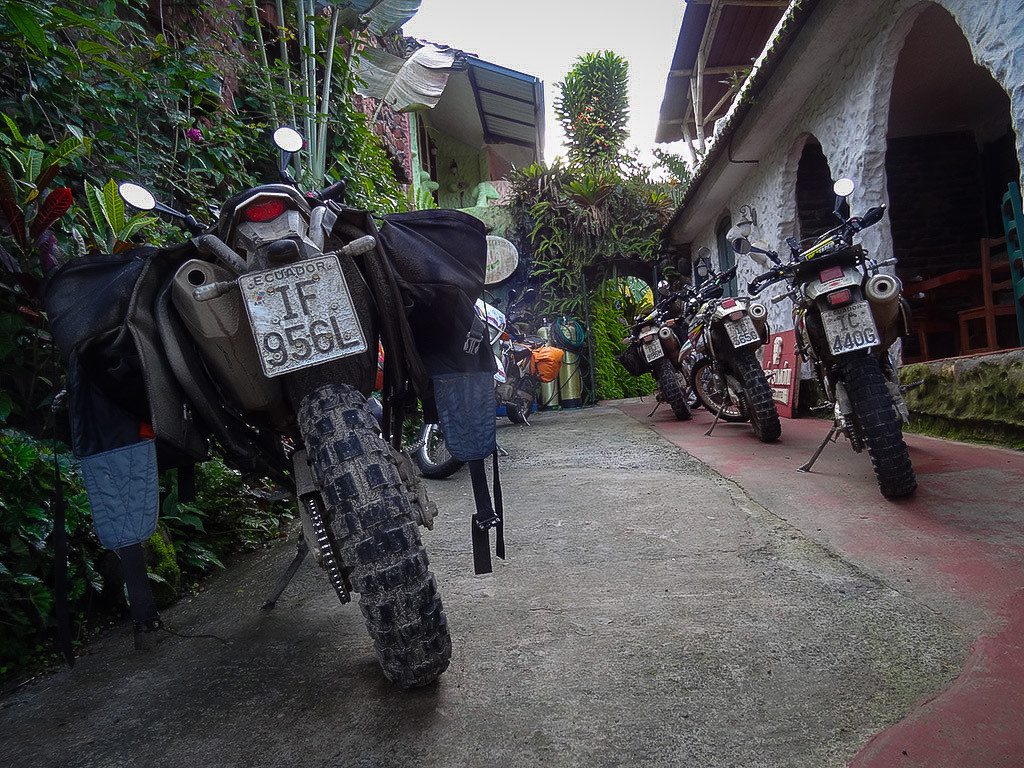 UP NEXT: Las Mercedes, Plantation Country, And My First Off