This time of year sees me paying a lot of attention to weather forecasts. Any hint of double-digit temperatures and sunshine means that the season can be extended by one more ride.

It was with child-like glee that I noted the predictions for Wednesday, November 4, 2015 – a balmy 16°C and sunny!

Since I had been watching the long-range forecast, I had started my planning the Saturday before. Throwing it out there to the FB universe that I was planning a ride for Wednesday.

I used my last 8 hours of vacation time, booked Wednesday off from work, and floated through the next few days, buoyed by the notion that I was going to spend at least one more full day in the saddle this season. 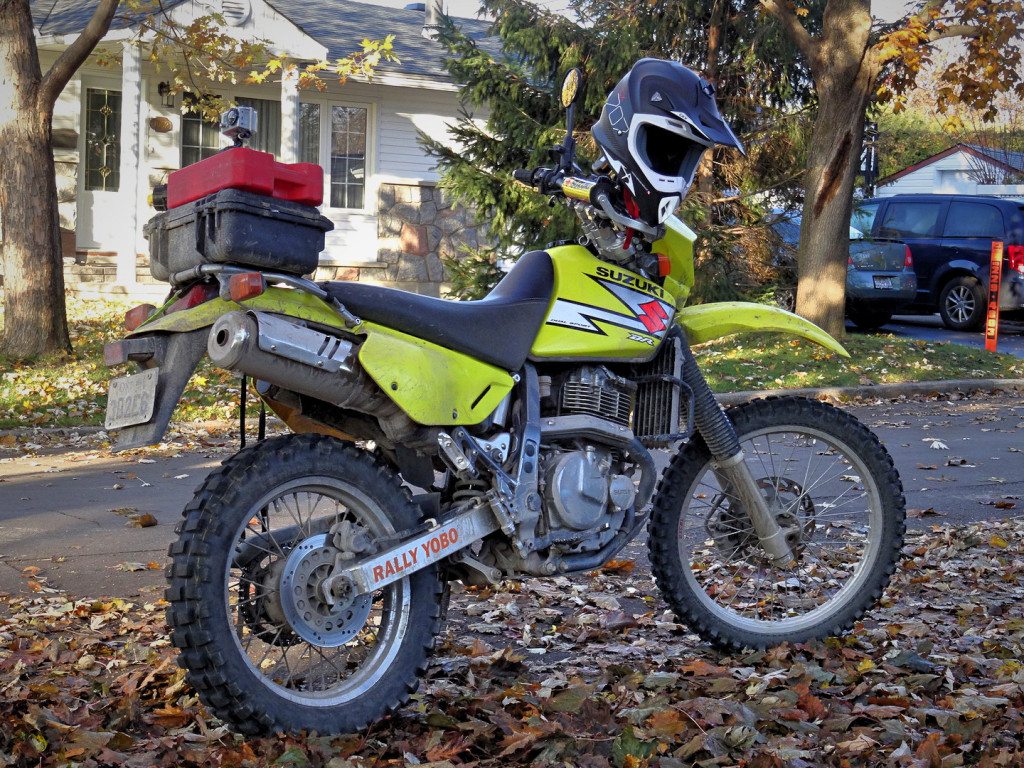 All set for the last adventure of the season

Wednesday morning rolled around and four of us – Ryan, Bud, Jason and myself – met up in Barrhaven, Ontario around 0900. The morning air was fresh at only 6°C. The morning fog burning off suited my state of mind perfectly.

After a quick coffee and breakfast at a Tim Horton’s, we were on our way. The plan was pretty loose. We were going to head to the Almonte area and ride some of the incredibly enjoyable gravel roads that criss-cross the region like a serpentine roller coaster. We’d also scoot along some of the twistiest asphalt in four counties and maybe hit a section of the K&P Trail.

We were not planning on anything too rough or off-road oriented because, although Jason was on his DRZ400, and I was on my DR650, Ryan was riding his Ural with Bud riding monkey in the sidecar.

We made our way along some back country two-lane asphalt towards Almonte, eventually turning left onto March road. Chatting on our UCLEAR Bluetooth helmet communicators, Ryan, Bud and I were laughing about the idea of taking a run through Burnt Lands, a popular off-road riding area that skirts some Provincial Park Nature Reserve Class land outside of Almonte.

This time of year, the water in Burnt Lands is deep.

Just as we decided amongst ourselves that it was probably best not to run Burnt Lands with a sidecar, Jason – who was in the lead and had no helmet communicator – hit his right turn indicator and pulled into the Burnt Lands entranceway.

We chuckled to each other about speaking too soon . . .

Once parked alongside each other we quickly had a change of mind. Ryan good naturedly ribbing Bud about how much fun it would be in the sidecar. I attached my GoPro to the Rotopax on the rear of my bike, hit record, and off we went.

Have I mentioned that the water can be deep in Burnt Lands? Well, I was leading, and Ryan, who knows the area better than any of us, reminded me that I was approaching the go around for the first deep water hole just as this happened:

Which led to this: draining the airbox. 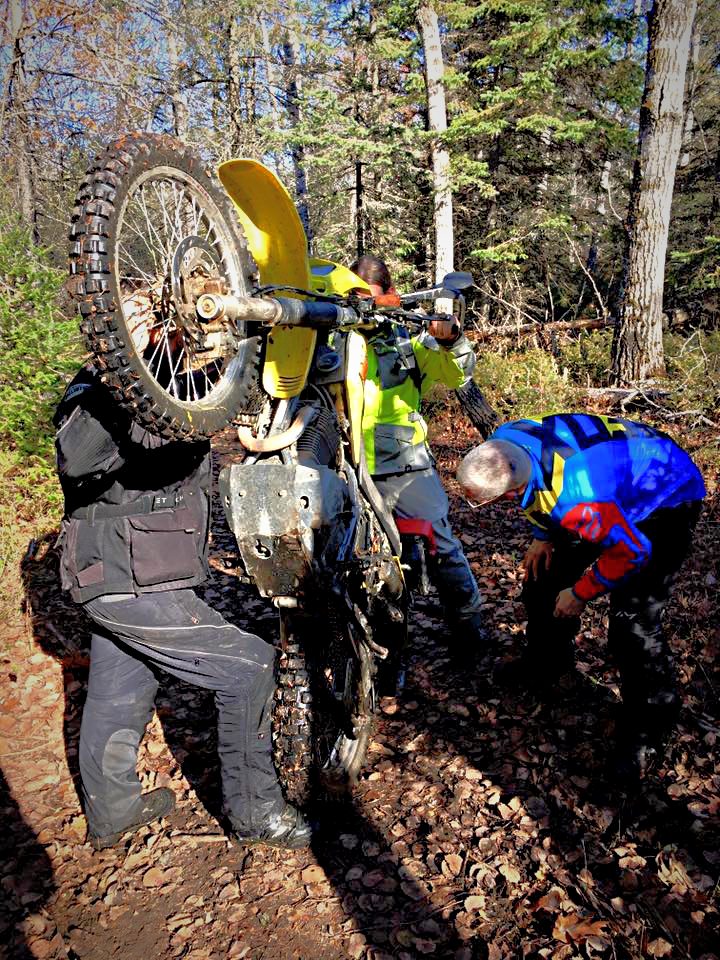 And this: wringing out the air filter. 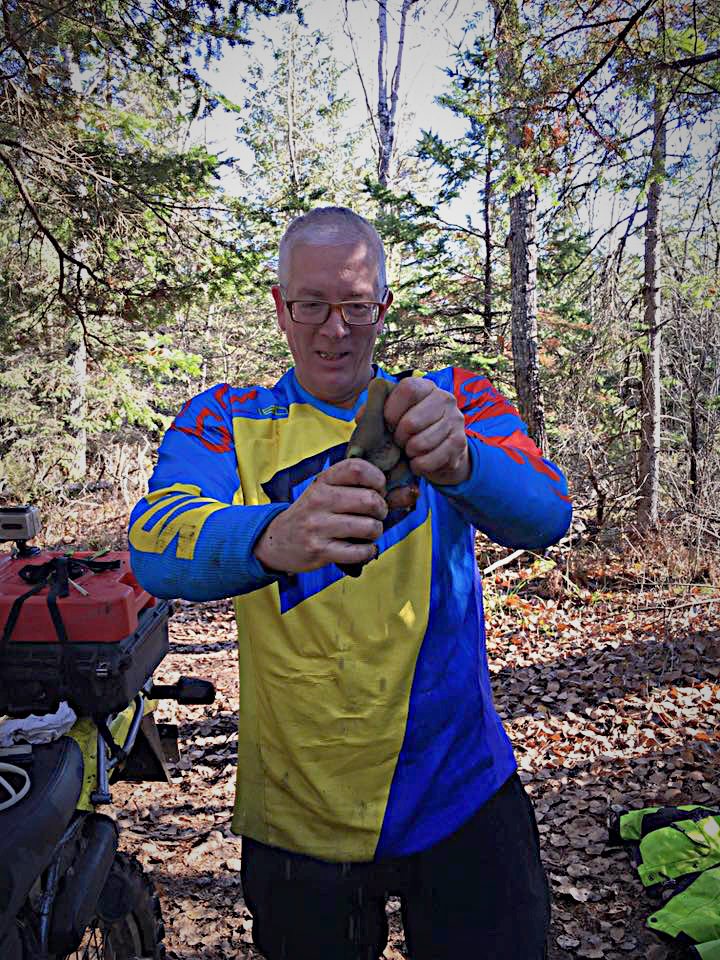 And finally this: towed by Ryan’s Ural. 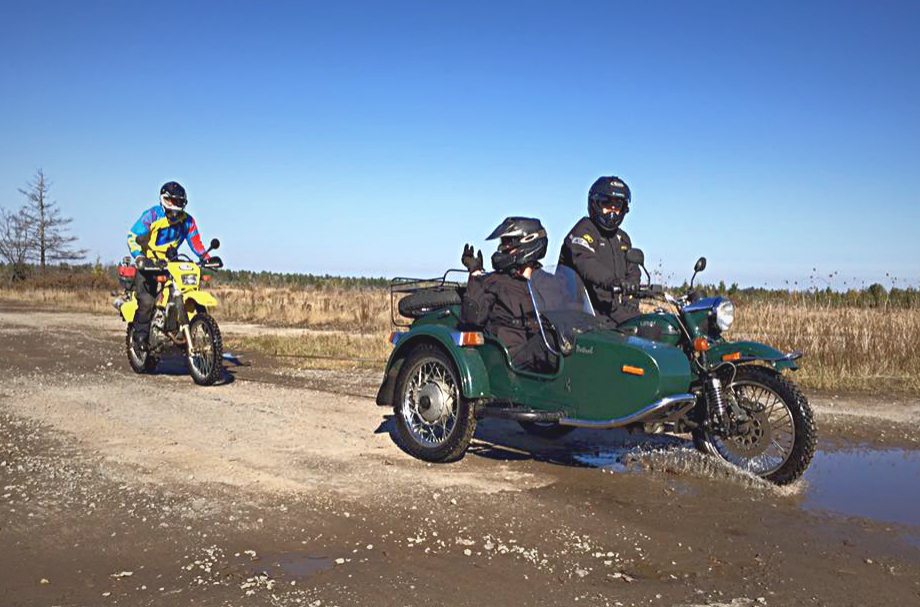 Talk about putting a damper on the day! Thankfully, Jason had a tow-strap, and even more fortunately, there is a powersports shop literally within 500 meters of the entrance to Burnt Lands.

In short order I was standing in the service area of March Road Motorsports, laying myself at their mercy. And, true to everything that I have heard about the people that run this little operation, my DR650 was up on the bench and getting an oil change in no time.

Actually, two oil changes. There was a lot of water.

Within an hour or so we were back on the road and heading out toward the South Lavant area. Jason had suggested that we check out Ranger Camp Road, and we were all quite happy with that idea. Of course, that fates of the seasons final adventure were not quite done with us yet, as just outside of Lavant Station, this happened: 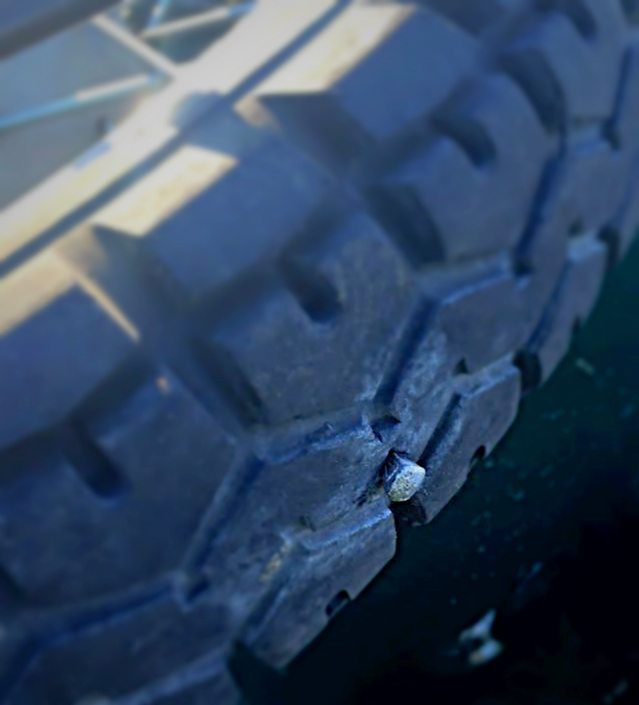 Ah, the mighty Ural. And it’s 24+ piece tool kit. And its mounted spare tire that rides on the trunk lid of the side car. 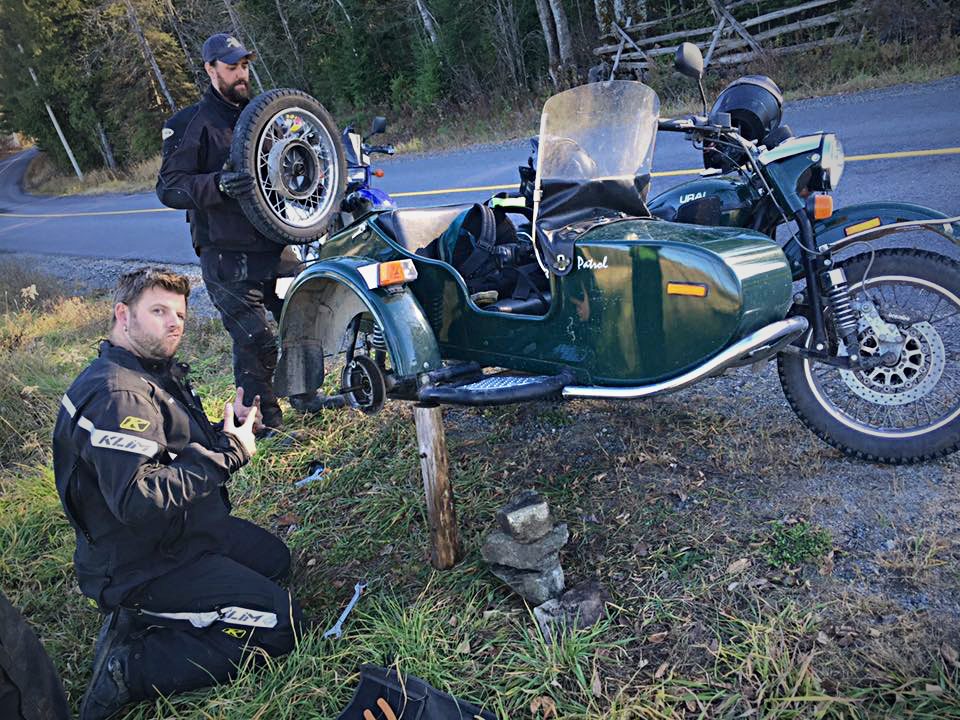 10 minutes! That’s all it took to change the tire, and we were off again.

Unfortunately, I had mismanaged the settings on my GoPro and failed to get any footage of Bud operating the Ural with Ryan riding monkey. Unfortunate because Bud was driving that thing like he had spent tons of hours in the saddle, rather than like someone who had only a few minutes of seat time. Drifting the corners of the gravel roads that we were riding on – Lavant Mill Road, Ranger Camp Road, Umphersons Mill Road – and flying through the forest like we were on Speeder bikes, we had an absolute blast. The weather was great, the conditions sublime, and the four of us experienced in one day all of the things that it sometimes takes a whole season to live, including breakdowns, swampings, flat tires and all . . .

I have to say, for this rider at least, that it was a beautiful ride home and the perfect ending ride to an amazing season of riding.

And I also have to give a shout-out to the lads at March Road Motorsports – thanks for getting my DR650 into the shop and back out on the trails so quickly guys!

Please go to the Instagram Feed settings page to create a feed.