We got up early on Saturday morning, having been told that we needed to be in the queue by 0700 in order to ensure that we were able to board the ferry – reservations or not – even though the scheduled departure time was 0800, and the ferry landing was a mere 200 meters from the motel.

We quickly ate our bacon and eggs, tossed back a coffee and a half, and finished loading our bikes with our gear.

A couple of riders were sitting on idling Harley Davidson’s – full dressers that looked really nice, yet really out of place all at the same time.

A wordy bunch, these Harley riders.

I explained it simply – “about 700 kilometres of gravel.”

And that was the end of that conversation. The two riders throttled their Harley’s, looked at me like I was seriously deficient, and roared out of the parking lot.

We headed down to the staging area and sat with another group of riders also waiting to board the ferry. These fella’s were also riding Harley’s, but they seemed to have a little more ‘adventure’ in them and quickly started chatting us up.

Coming from Florida, Iowa and Massachusetts, these guys – I think there were 6 of them – were part of a riding club known as the Geezers and they got together every year to go on a long ride together. This year saw them riding through Newfoundland, and they had all agreed that since they were this close, they had to go to Labrador as well.

This bunch of guys were familiar with the Trans Labrador Highway, having read ride reports and chatted with friends who had made it a part of an adventure, and were very happy to say that they would be turning right (east) from the ferry terminal and riding to the big ‘Welcome to Labrador’ sign, and that would be it for the Labrador portion of their adventure. They were then going to head west along highway 138 into Quebec in search of some fabled twisties on the way to Vieux-Fort.

These fella’s were all really interested in our bikes, our gear, and our adventures thus far and we likewise were engaged in hearing their riding tales.

The hour-long wait passed in what seemed like moments and we were then informed that we needed to prepare to board. It was at this point that I experienced yet another ‘first-time’ moment.

Every time that I have taken a ferry (always in Canada – my adventures have not taken me out of my home country as yet, but that is coming soon) motorcycles have always had the privilege of being ‘first-on, first-off’

Not so at St. Barbe.

“You guys will wait here and board last, ok” was the very clear direction given to us by the boarding officer.

I am guessing he had heard the ‘but, but, we always go first’ complaint more than enough times, and had learned to just shut that down before it began.

We boarded and secured our bikes in the hold with no issues. Just like our Port aux Basques crossing, there were way more 55’ tractor-trailer rigs than I would ever have expected to see in the bowels of a sea-crossing ferry, and we made a mental note to allow them lots of time to clear before heading off on our adventure into Labrador and onto the Trans Labrador Highway. 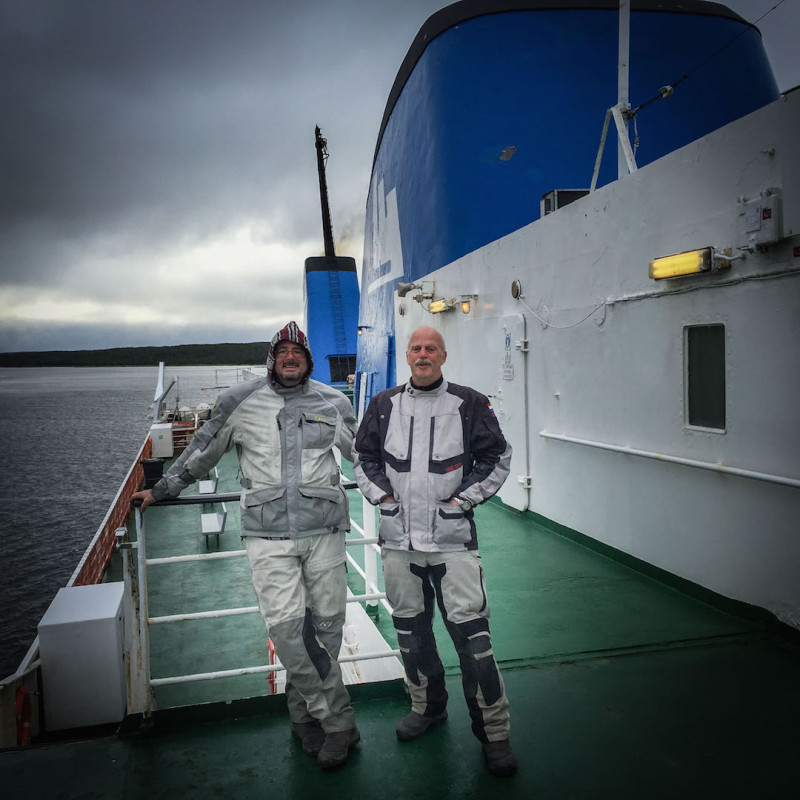 Jeff and Mike on the Ferry from St. Barbe to Blanc Salon

Unlike the ferry onto the island, this one was only 90 minutes long.

We enjoyed the short sail, had a coffee and chatted with another adventure rider from Great Britain who now made his home in Labrador, and just that quickly it was time to ride off.

We headed up the 510 towards L’Anse Amour, where we were going to go and see the lighthouse at Point Amour.

A little history about L’Anse Amour, where human settlers have lived for 7,500 years, and yet the population according to the most recent census is 83 people.

The lighthouse at Point Amour is the 2nd tallest in all of Canada at 33 meters. I opted to take the tour and climb the 132 steps to the top, banking on the fact that my ankles would not complain too much until later in the day.

A very informative and interesting tour, I recommend it to anyone who finds themselves in the area. 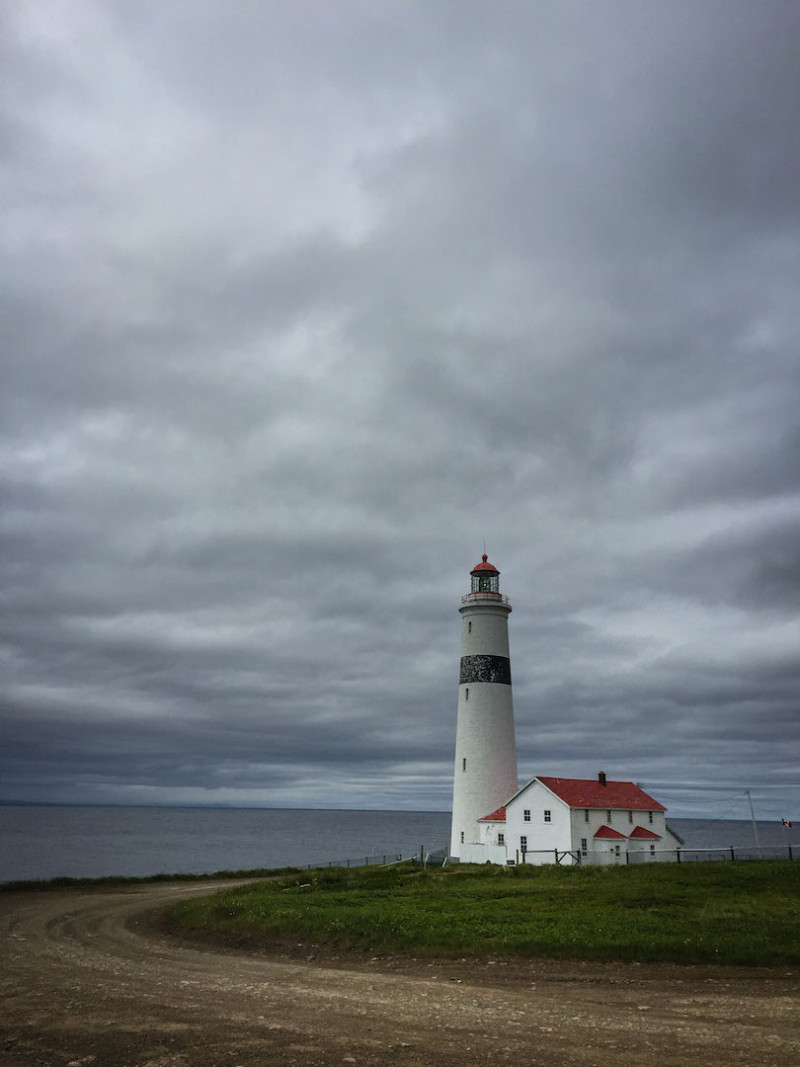 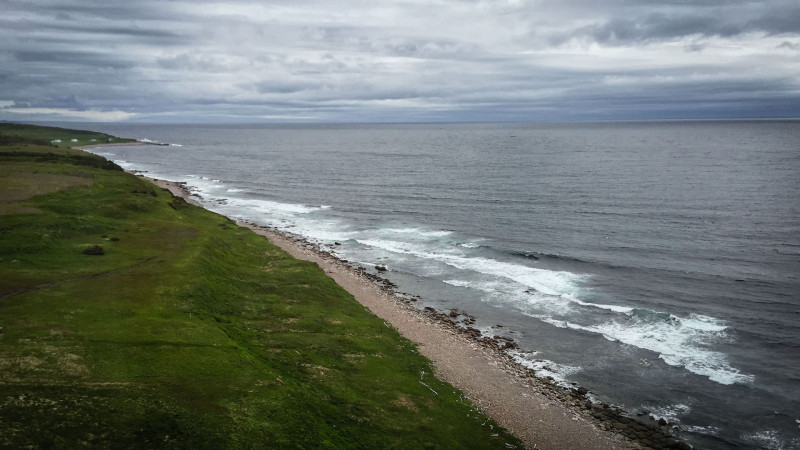 After leaving Point Amour we continued on our way towards Port Hope Simpson, and for the first time I experienced some real “holy-shit-I-do-not-like-this-one-bit” riding conditions.

The wind from the ferry landing all the way along the 510 east-bound must have been blowing at least 50kmh, with gusts upwards of 70kmh.

Our bikes were being blown all over the place, and the lean angle that we had to maintain in order to remain upright was insane!

It was really too difficult – and dangerous – to take in our surroundings, so we pulled over to the side of the road anytime that the view demanded it. 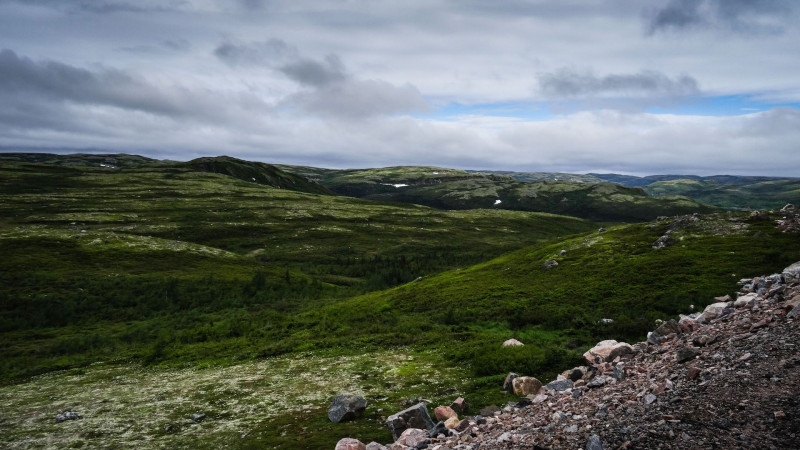 Of course, once we hit Red Bay and headed north, the wind was no longer the primary issue.

This is where the gravel starts.

To give you an idea of what the riding surface is like, imagine a large, granite counter top. Now cover it in marbles. And then sprinkle baby-powder over the entire surface.

Now try to roller blade on that. 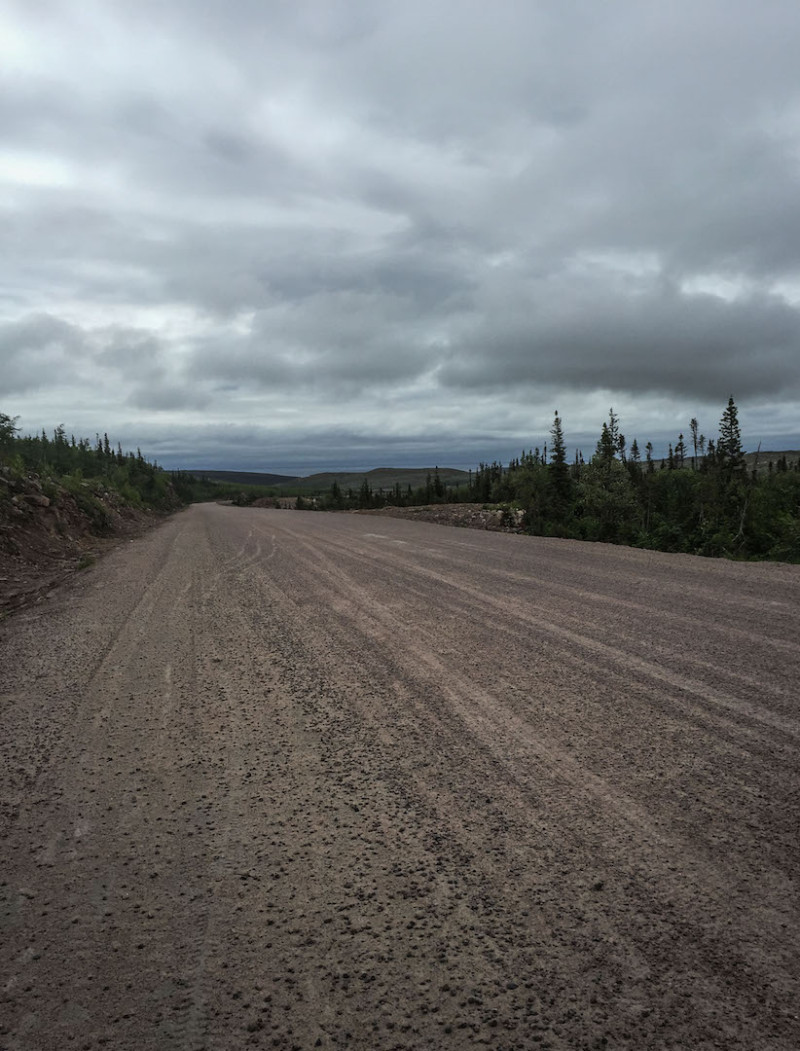 Get the idea? It was squirrelly as hell, the bike’s front end trying to go one way, the back end sliding in another direction, and all the while that wind, which was no longer blowing straight across us, but now hitting us on the oblique, continued to try to push us off the road.

I lasted 5 kilometres before realizing that I had forgotten to do something very important.

Mike pulled up behind me as I was just putting the valve cap back on my front tire.

I had been running the factory pressures of 36psi front and 38psi rear – way too hard for this riding surface.

Airing down to 20psi front and rear, I suggested to Mike that he do the same.

And all of a sudden, we were back to having fun!

What a difference it made. Now, rather than rolling ‘off’ the marble-like gravel and slipping all over the talcum-like sand, we were rolling over the surface, our tires finding purchase and gaining some bite.

I was once again thrilled with my decision to purchase the Mitas E 07 Dakar tires for Big Ethel.

Filled with new-found excitement, we picked up the pace and began to realize our Trans Labrador Highway adventure dreams coming true!

And then the rain started.

It was really just a drizzle, but it was a cold drizzle. The air temperature had dropped to about 7 degrees, and  the rain made it that much worse. We all turned on our heated grips, bared down and continued on our way to Port Hope Simpson. 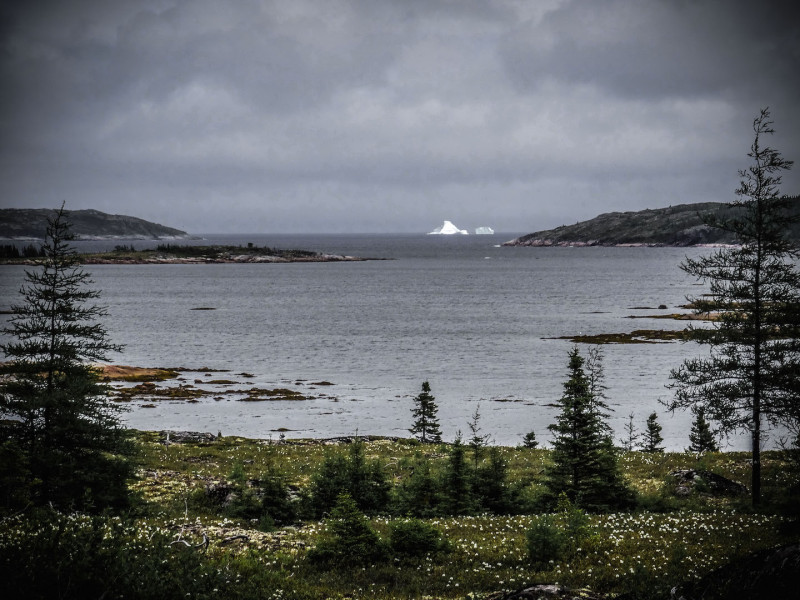 Despite the cold weather and rain, we were treated to amazing vistas on the way to Red Bay

The road quickly deteriorated as we went. Lots of pot holes – some resembling sink-holes – and kilometre after kilometre of really rough washboard made it for some slow and bone jarring riding.

Complicating things, the road surface frequently changed and would become a really deep mix of sand and gravel, making for a smoother but no less hair-raising ride. Then, we would hit sections that were really nice and smooth. Hard-packed limestone and gravel, very similar to the gravel roads that I am used to riding in eastern Ontario.

We would pick up the pace again, and in no time find ourselves in the Labrador version of a Dakar rally sandstorm. It was necessary to spread ourselves out with 500 to 1,000 meters between us in order to maintain anything even remotely resembling visibility, and when the big trucks came up on us we found it prudent to give them lots of room and let them go by.

We finally arrived in Port Hope Simpson around 3:00pm, stopped for a coffee and a Danish, and I took the opportunity to pull off my boots and purchase a new, thicker pair of socks.

We had originally planned on making Port Hope Simpson our camp stop for the night, but with at least 5 more hours of daylight ahead of us, we decided to soldier on the Cartwright.

My left boot was once again wet, something that I intended to talk with Forma about, and I was losing body heat rapidly through that appendage. So I put on warmer socks, pulled a plastic bag over my left foot, strapped my boots back on and away we went!

Now, I should mention here that there really is no good reason to go to Cartwright – at least, none that applied to 3 adventure riders from eastern Ontario.

Other than making it part of the adventure, of course.

An 180 kilometre detour (90 kilometres each way), going to Cartwright was really only necessary in order to be able to say that we did it, adding to the awesomeness of the adventure overall.

Thank you once again for coming along for the ride – I hope that it has been an adventure for you thus far as well!

Up next . . . A Strange Evening in Cartwright.

Enjoying your website! Great pictures along with entertaining writing…hope you keep it up! I know how much it work it is…Though I am a prairie boy and we live in the Prairies my Newfie wife reminds what it’s like to be a Newfoundlander!
Bikes owned:Vstrom 650 his/hers, KLX 250 his, CRF250L hers.

Thanks for taking the time Carl – I appreciate that.

I enjoy the writing almost as much as the riding.
Ok, maybe not quite that much, but I do enjoy it, and I have no plans on stopping 🙂