Wipe Out on the Trans Labrador Highway 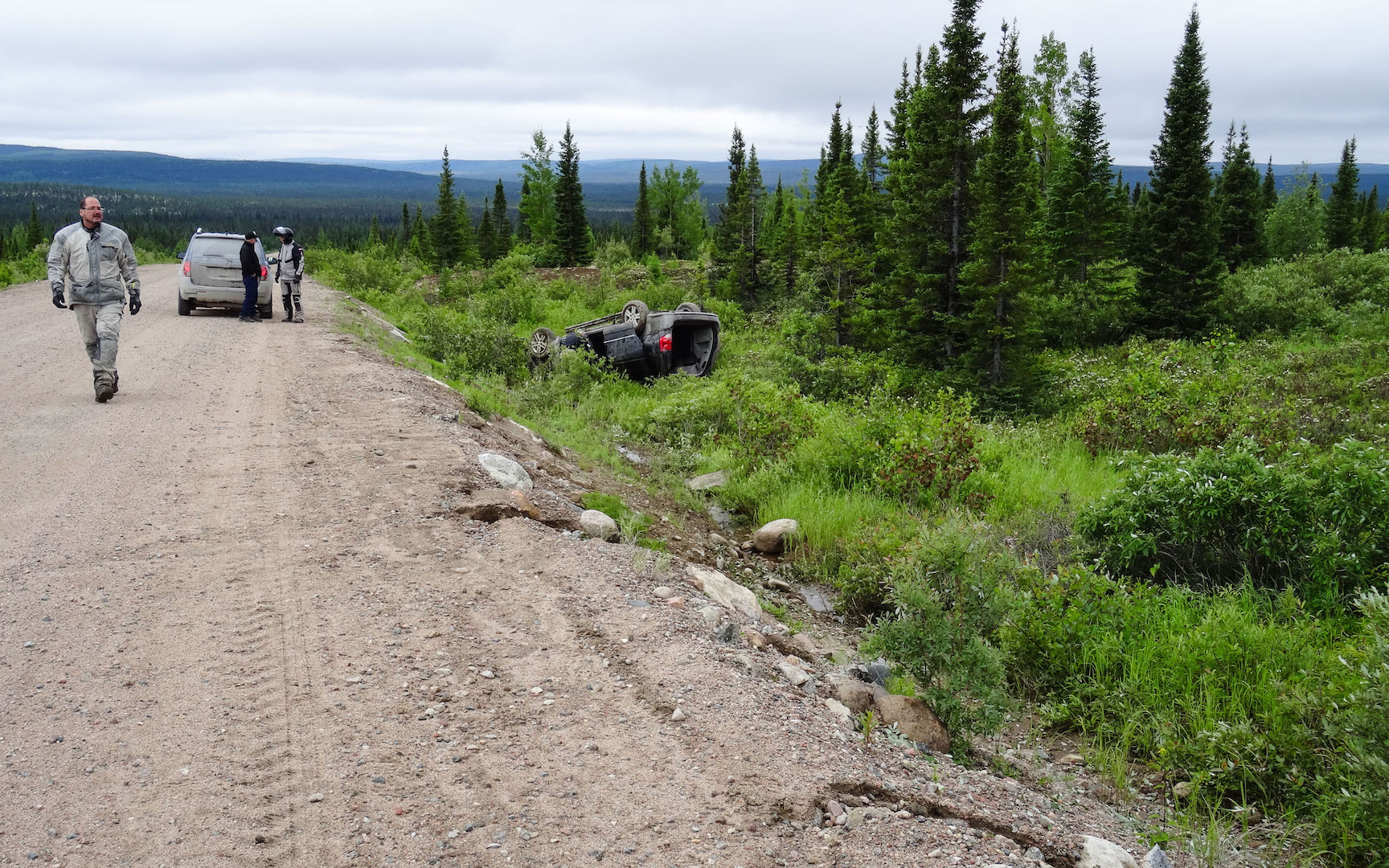 At the end of the last post, Jeff, Mike and I had been making our way towards Happy Valley-Goose Bay after coming across a single vehicle accident on the highway 516 portion of the Trans Labrador Highway.

Thankfully it turned out that everyone involved remained uninjured – and eager to continue their adventure. Our friends Paul, Rolly and Chiclet have since completed their journey in a newly purchased mini-van and I wish to express once again just how grateful I am for that.

Boy, when Paul plans an adventure, he takes it to the limit!

I also want to step back a second and make sure that I am clear about something else.

There is absolutely nothing wrong, or incomplete, or lacking about Cartwright.

The lacking was completely mine. 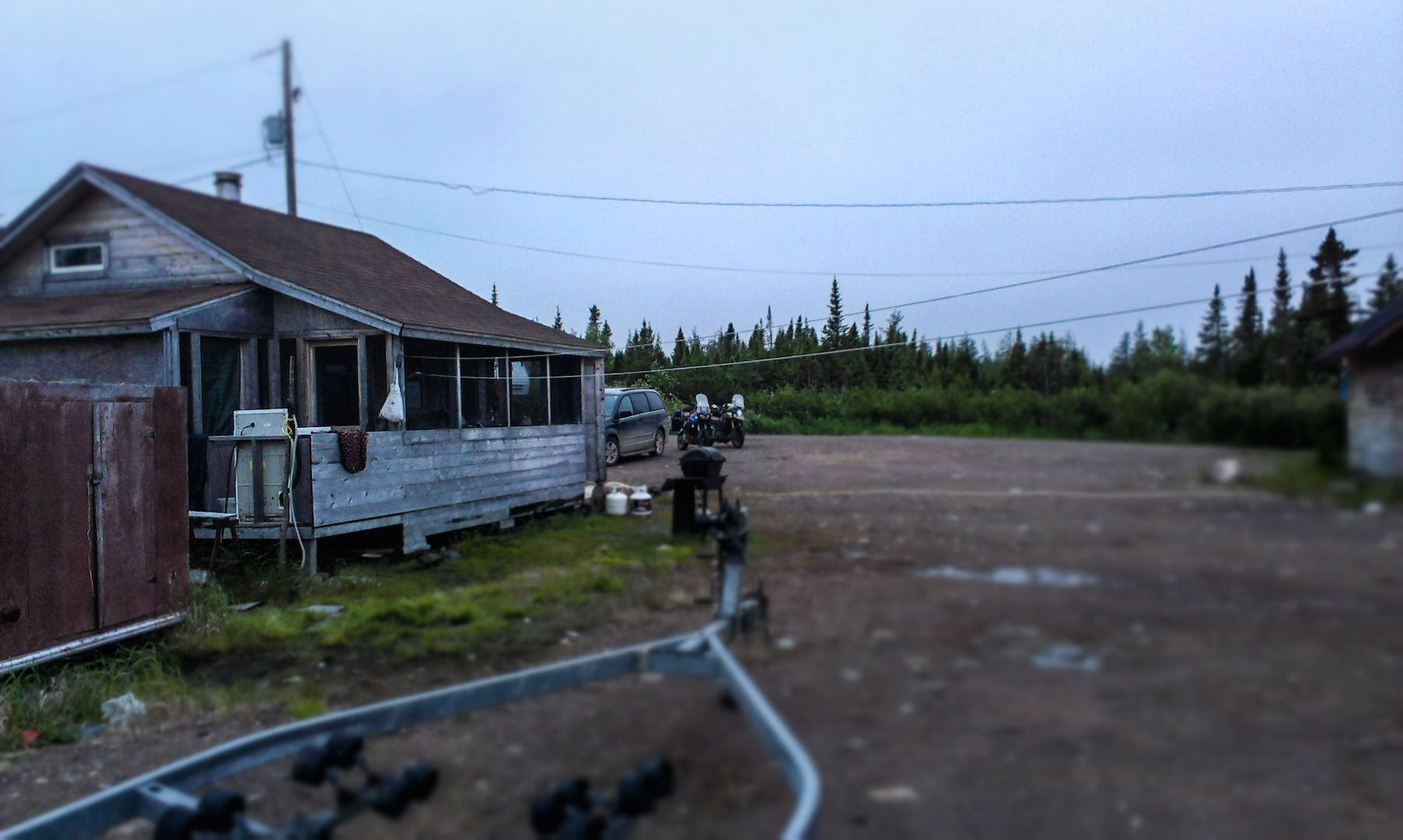 Though I like to consider myself to be both a country boy and an adventurer (of sorts) I hold no misconceptions about my ability to live the type of hard life that the residents of some of our countries most remote communities live day-in-and-day-out.

So while I may have sounded a little critical of Cartwright, Pete, and the local motel front-desk lady, that was a combination of creative writing and my mood at the time of the experience. Please, dear readers, do not let my words shade your plans to visit this incredibly beautiful part of our small, small world.

We three amigos were now faced with a 310 kilometre ride before the next fuel stop (the distance from the 510-516 junction to Happy Valley).

That is a long way to go without seeing anything resembling civilization, no matter how you cut it. But then, that is also part of the allure, right? Knowing that, short of a passerby, we were entirely dependent upon ourselves for the next several hours, and caution was now more than just a fleeting thought – we had to keep it first and foremost in our minds and riding styles. 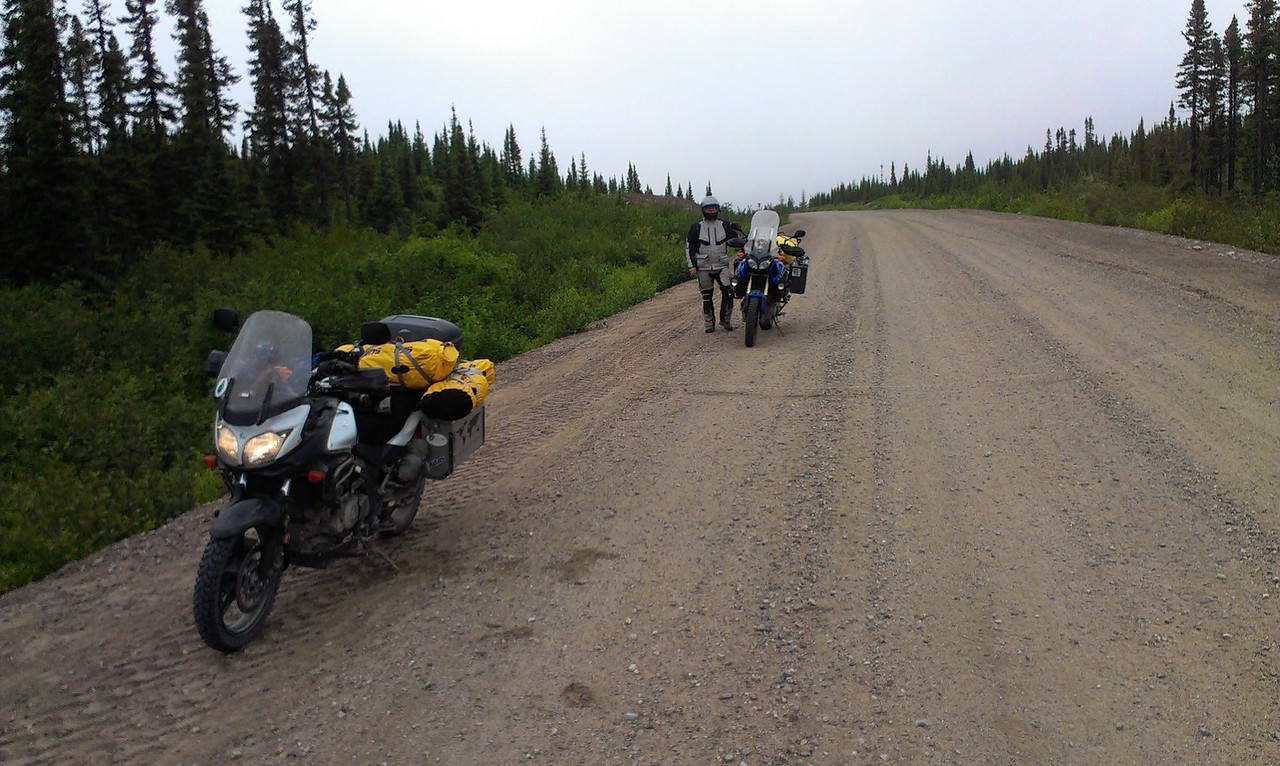 The first couple of hours were cold, wet and basically non-eventful. The road conditions continued to vary between super-fast hard packed gravel, deep and loose packed stone, and snail-snot slippery sand, often times catching one or all of us off guard, creating those butt-cheek clenching white knuckled moments where it is all you can do to keep your shorts clean for a little while longer. 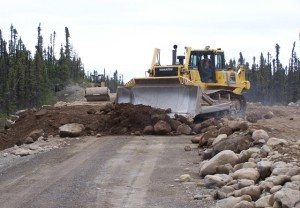 The one thing that we did notice almost immediately after turning right back onto highway 510 was the increased construction traffic. Everything from 1/2 ton pickup trucks to Komatsu rock trucks and bulldozers were coming at us – some of them moving at a crawl, and others causing our machines to shudder in their wake.

We travelled through several active construction sites, bringing home the reality that the Trans Labrador Highway will soon lose some of its adventure appeal as more and more of it’s gravel length gets paved. Active paving heading south from Happy Valley began this summer – and the first 80 kilometre stretch heading towards the Cartwright Junction is expected to be finished shortly.

It was shortly after riding through one of these construction zones, flying down a really smooth section of hard packed gravel, that Mike and I noticed an operator leaning out of the door of his grader and gesturing feverishly at us.

He was moving his hands in the universal slow-down motion and pointing to the surface, so we merely presumed that he was pointing out that we were riding a little fast for the conditions – those being, uhmmm, a gravel road.

Seeing no immediate change in either road conditions or construction traffic, we carried on as we had been.

Which is to say, somewhat north of the posted speed limit.

About 30 seconds – or one kilometre later – I looked up just in time to see Jeff’s riding posture change dramatically.

My wipe-out on the T-Rail while riding the Gaff Topsail Trail suddenly flashed before my eyes, and I knew immediately what was happening.

Jeff had just hit some deep loose gravel. That was what the grader operator was trying – in vain – to warn us about.

I was third in line – Mike riding between Jeff and I – and I had no way to warn Mike. 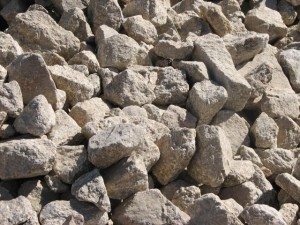 I got off the throttle, squeezed my clutch and got on both the front and rear brakes just before hitting a section of really deep, really loose ‘B’ gravel.

As I saw the surface about to change from hard and fast to soft, loose and painful I released both brakes, dropped 2 gears and got back on the throttle, using inertia to keep the bike in a hopefully-manageable straight line.

Mike was out of control on the far right hand side of the road as I went past him.

I had the supreme advantage of knowing what to expect, and knowing how my heavy V-Strom was going to react in this loose, heavy rock.

Mike, on the other hand, was taken completely off-guard.

I tried to remain as loose as I could on the bars, adding a push here and a pull there as needed to keep Big Ethel travelling in a more or less orderly fashion, all the while trying to keep an eye on Mike in my mirrors.

When I saw the backside of his aluminum panniers in my mirror I knew it was going to end bad.

Mike’s V-Strom was in the middle of what, on asphalt, we would refer to as a tank slapper.

The front end was veering rapidly right-to left, sinking into the loose gravel under braking, and the back end had no choice but to try and pass it, inertia carrying the heavy ass-end around in the beginnings of a 360 degree out-of-control slide.

By the time that I had Big Ethel stopped and on her side-stand, Mike was just trying to stand up again, shakily getting to his feet.

I yelled for Mike to wait, I would be right there, realizing how foolish that sounded as it came out of my mouth.

My recently healed ankles do not allow me to move faster than a slow shuffle, much less run. Combined with the surface upon which I was trying to walk as quickly as possible, I found myself frustrated at my inability to help my downed companion.

As I approached Mike – still some 50 feet away, I noticed that he was up and walking, seemingly okay. I had him raise both arms, together and individually, and when we were both satisfied that he had not fractured a collar bone, arm or leg he began to take a full inventory of how his body felt.

Once again, the angels of adventure travellers were watching over us.

Mike was pretty much fine. A sore ankle from where Harley had landed on his foot, or maybe from twisting it as he went down, was his only complaint.

The V-Strom was not quite so lucky.

As we picked her up and got her onto her side stand, the first thing that I noticed was that his left-side foot peg was gone.

Then we noticed that the subframe to frame connector bolt had been pulled three quarters of the way out of the frame. This could be bad . . .

But again, thanking our guardian angels, it was not.

I walked back to my bike, telling Mike that I would return with 2 things – my tools, and something guaranteed to make him smile.

Mike was still scratching his head, wondering, as I approached him again, tool roll in one hand, and clenched in the other . . .

I had snapped one of my after-market pegs off several weeks prior and now always travel with my original’s in my top case.

Needless to say, Mike was pretty stoked to have a replacement peg, and we also managed to get the frame bolt back where it belongs.

In the end, a slightly misshapen pannier was really the worst of it.

Considering the speed, and the conditions in which Mike went down, saying that he was lucky is an understatement.

Taking a few minutes to shake it off, we then got back astride our machines and continued on. Thankfully this section of deep ‘B’ gravel was only about 500 meters long, and we were soon back in much more ride able conditions.

Lots and lots of pine trees.

By the time that we pulled into Happy Valley Goose Bay we were all ready to call it a day. The temperatures were still quite cool – having reached a high of 10 degrees, and combined with the earlier events of the day we were only too happy to park our trusty steeds for 12 or 14 hours.

We checked in at the Hotel North 2, unpacked our bikes and showered before sitting down to a nice hot supper in the restaurant next door.

Could we have found a place to camp? Sure we could have. Labrador is almost one big rough-camping gold mine.

But I have to admit – once the temperatures begin to drop, or the rain begins to fall, some of the adventurer in me gives way to the city-boy in me.

Besides, credit cards were invented for a reason, right?